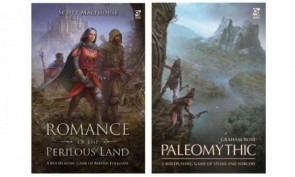 Game Name
Publisher
Osprey Games
There Will Be Games

Excellent new RPGs from one of the industry's best publishers.

Osprey Games made me a fan with Frostgrave and Gaslands, two of the best miniatures rules sets on the market, and then they started making some pretty damn great board games like Undaunted and Judge Dredd: Helter Skelter. As if they are making a concerted effort to become my favorite publisher, they have also echoed my rekindled interest in role-playing games by moving into that product sector. They’ve just put out two new books in what I hope will be a long-running and successful range: Scott Malthouse’s Romance of the Perilous Land and Graham Rose’s Paleomythic. These small format hardcovers are absolutely beautiful books, as you might expect from Osprey these days, and like all of their publications they are simply a joy to leaf through with excellent rules writing, attractive layouts, and stunning illustrations.

They are the kind of books you feel proud to have on your shelf, the kind where when you see them you just feel compelled to take them down and crack them open. But as these are RPG books, there is the issue of whether the games are actually any good or worth playing. With this format, that is a hugely subjective matter contingent on innumerable variables. But I think these are definitely worth a look as viable games – and as potential sourcebooks for other games you might be currently playing or running.

Romance of the Perilous Land calls to mind the Greg Stafford classic Pendragon, an RPG set in Arthurian legend and published first by Chaosium in the mid-1980s. It’s a more streamlined system with much mechanical resonance with the current 5th edition of Dungeons & Dragons, enough that 5E players should feel right at home with analogous classes and abilities, D20 versus DC based checks, “edge” (read: advantage), and various bonuses for attributes and skills. This is really a fairly standard modern system. It could be argued that the rules lack any kind of innovation or inspiration, but the familiarity works in its favor because the balance of the book is a great sourcebook for those looking to the traditional folklore of the British Isles to develop adventure ideas or to set games specifically in the time of Camelot, the Knights of the Round Table, Merlin, and Morgana Le Fay.

The setting and lore material in this book is totally top notch, presenting a tantalizing mix of real-world history and myth that will have a broad appeal to many players. Given its specific geographical setting, I’m very pleased that the illustrations are inclusive and diverse, opening this world to everyone. There is plenty of content that is really system agnostic – the bestiary of traditional creatures and monsters is a delight, although the dearth of illustrations in that section is a tragedy. I want a picture of a Shellycoat and a Nuckalavee to accompany their entries. There’s a host of spells for Cunning Folk characters (a sort of condensed magic user class) and plenty of magic items including of course Excalibur. I’m also fond of the section that provides full stat sheets for Arthur, Guinevere, Robin Hood, and other big name stars of this setting. They are of course at the upper tiers of the level 10 limit, but I think a one-shot adventure with everyone playing these heroes would be a lot of fun.

Paleomythic takes us away from the foundational sword and sorcery of Arthurian times to what is billed as a “stone and sorcery” setting. The book details its world as a kind of pan-cultural, prehistoric one in which characters might be gatherers setting out to collect herbs to heal a village elder, warriors sent to explore a cave system that seems to be the source of marauding monsters, or a Shaman traversing the Other world to do battle with a rival sorcerer antagonizing your people. There are not, however, classes. Instead, characters are brought to life with an array of Talents, Traits, and Flaws. This allows for maximum flexibility and a true sense of creating a complex stone age personality.

The opportunities for storytelling and unique narratives are tremendous in this game. The setting is fresh and far removed from the usual fantasy tropes – if you’ve ever wished for a game that had a pre-Columbian Mesoamerican setting or one where you could explore African folk traditions, this could be a great place to derive inspiration. And, as the included one-shot adventure indicates, it also makes for a cracking dungeoncrawler.

I really like the core mechanisms Mr. Rose has written into this game. It uses a D6-based dice pool scheme whereby you get dice for applicable traits, lose dice for flaws that impact your check, and then you gain a bonus die if you are using the correct “tool” (such as a weapon) for the attempt. Sixes are successes. Critical success and failures are a function primarily of the tool die- if you roll a 1 it breaks and if it’s a 6 the tool’s special effect goes off. There are also a range of Tactics and Activities a character can use, which remind me of the Moves employed by Dungeon World and similar designs. Put together, It’s a simple, effective, and fun chassis on which to build your adventures in Ancient Mu.

As mentioned, the included adventure is quite fun and it serves to show what kind of game this can be while also offering the comfort of a familiar type of RPG story. It’s a very well written one-shot adventure that I found just right for introducing the game when we were short a couple of players for our usual 5E session. Although I’m sure some will go absolutely nuts with the setting and develop long, involved multigenerational campaigns, I’d really like to see Osprey expand this game with sourcebooks more specific to regional peoples and with adventures that explore richer themes and cultural concepts.

ChristopherMD replied the topic: #305070 12 Dec 2019 18:38
Looks like Romance of the Perilous Land had a previous version/publisher.
www.drivethrurpg.com/product/190792/Roma...of-the-Perilous-Land

Matt Thrower replied the topic: #305077 13 Dec 2019 05:47
Was hugely impressed by Paleomythic. Not only is the setting unusual but the mechanics are innovative and run really well. There's also a brief variant included for running "realistic" prehistoric games which could be a fascinating thing.

These small book RPG's remind me a lot of Dragon Warriors. In a good way. The trouble is that for lines like this to survive they need ongoing support. Here's hoping Paleomythic gets what it deserves.

It is an excellent system though.
Read More...