Blades in the Dark - Review 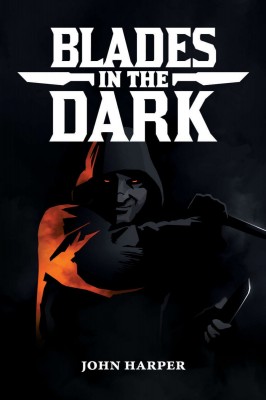 Over the last few years there has been an explosion of creativity in the indie RPG scene. Small games, made by dedicated individuals or teams are where some of the really innovative games are emerging in the hobby and I wanted to take the time to highlight my personal favourite, Blades in the Dark. I backed the game whilst it was on Kickstarter and started a local group towards the end of last year, with a new group starting up just recently online. It's a fantastic system, interesting setting and the two are interwoven to make a thoroughly compelling game. Let's take a closer look at what makes Blades tick and why I think you should give it a try, either as GM or player.

Doksvol, or Duskwall, is the focus of the game, a massive city on the Northern Peninsula of one of the Shattered Isles. Some time in the past a great cataclysm wreathed the world in an eternal darkness, the light of the Sun only occasionally making a very meek appearance through the clouds and fog that shroud the city in night. This Cataclysm shattered the doors of death - such that ghosts run rampant across the world. The major cities have lightning towers that form a barrier round the outskirts, keeping out ghosts and effectively trapping the citizens inside, as no one wants to go out into the Deathlands (the name is not inviting).

Across the city gangs of various status run the show, from the religious fundamentalism of the Path of Echoes to the secret machinations of the Hive and the low level street crimes of the Red Sashes and the like: the entirety of Duskvol is a living, breathing criminal hierarchy, all contained in the lightning fields so no one can get out: a powderkeg ready to explode.

Blades sees you as a bottom of the rung criminal enterprise, perfectly poised to take advantage of some recent events in the region of Crows Foot in Doskvol: a match to the powder. Each player will create a scoundrel taking their place alongside their fellow miscreants in a gang. Your gang may specialise in stealing, destruction, smuggling or even the worship of some ancient deity: whatever you choose will shape your adventures in this city of crime. 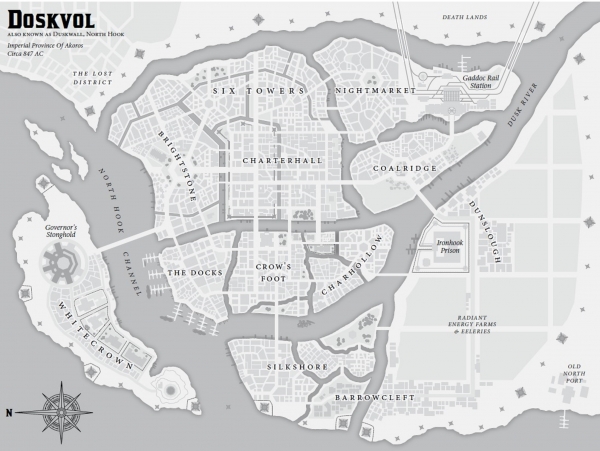 The action of Blades has a really nice balance between narrative abstraction and mechanical crunch. A typical session will revolve around one or more jobs being carried out by the crew. Rather than you taking a huge amount of time planning how to do the job the players have picked - and there are likely to be a few demands pulling at them at once - the game teaches you to zoom in on the action. It took me a few sessions to get this right but once you get a handle on it, the game really shines. Skipping the detailed preparation stages of a game like Shadowrun for a system that allows you to flashback to the parts of those plans that matter, really allows you to get to the action quicker.

Of course a job will affect the wider world around you, and every score comes at a price. You start off with a bunch of different relationships with the various organisations that run the streets of Doskvol and those relationships are constantly in flux as you carry out jobs: some organisations will want to help you whilst others will actively get in your way. As your gang grows, you will climb the ladder and take on bigger and bigger challenges, the system encouraging you to do so by rewarding more reputation: the currency by which you level your crew, rewarding going after bigger targets and scores.

As the crew grows, so does the criminal empire you control and the players can carry out jobs to grab certain claims from their own map of possibilities. Grabbing Turf makes it quicker for your crew to 'level up' whereas other claims may make you money, make it easier to get information - all sorts of possibilities depending on the Crew. The individual characters in the crew will also change, gaining access to new powers as they earn experience. Doskvol is a dangerous place though and they are also likely to pick up injuries and traumas as you play.

As with most roleplaying games the players are a little better than the average criminal walking the street. Partly this is down to the way they can call upon their reserves of stress to help each other out. Stress can be spent in a variety of ways: helping out others, helping yourself or resisting serious injury. However this is a limited supply that does not refresh without indulging your vice, a risky business that can come with its own problems. The system teaches this and teaches it early: every choice has a consequence.

From the GMs point of view, the game is a beautifully slick set of mechanics, designed to cause your players problems, with a minimum investment of time needed. Problems are fun. Drama doesn't come from nothing happening. After any job the world kicks back against the players: the GM adjusts relationships with the gangs affected by the score, rolls up some entanglements that will throw spanners in the works and ticks clocks. Oh let's talk about clocks.

These are a really interesting, incredibly simple mechanic that can be used for a variety of purposes. Each clock is a circle made up of 4, 6 or 8 segments. These are used by the players to keep track of projects in Downtime, show how a particular faction is reacting to the players, the projects of NPCs, healing - all sorts. Ticking a clock round is baked into the mechanics, depending on the type of clock that it is, and they crop up all over the place. A clock could represent the participants in a chase, the guards in a building, the ticking down of a forthcoming election. They are an incredibly diverse, beautifully elegant piece of design can be used to give a real feeling of pressure and despair, or relief and hope, depending on how you use them.

There's one last thing I would like to tell you about Blades: it's a great read. I've been reading a couple of other RPGs recently but they are such a dry read that I find it a real struggle to get through them. Blades held my attention throughout my initial readthrough, and I've devoured every iteration of it during its development. There is a pace and a lightness to the way it introduces then reinforces its mechanics I think a lot of games could learn from.

Blades is a great game and an important one. It's changed the way I GM and every session I've run of it has been an absolute joy, even the ones that faltered a little here and there. It should influence future RPGs, the way we explain games to people, what we include and don't, but I doubt it will gain much traction in an industry that is seemingly happy to push out mediocre content and do little to attract in new players.

Run it some more.

You'll never play anything quite like it and you'll be a better player and GM for it.

August 21, 2020
Rating
5.0
Blades in the Dark
Welcome to Doskvol! City of thieves, assassins, and smugglers. Perfect for a small criminal enterprise like yours. Read on to find out how you to can commit the best crimes in this RPG of crime, consequences, and the temptations of power.
T
thegiantbrain Top 50 Reviewer 36 reviews

Jexik replied the topic: #313530 27 Aug 2020 01:28
A friend ran a few game of Blades for us and all but one of us liked it a lot. The guy who didn't hasn't done a lot of roleplaying though, and is more into computer games. He just kinda said, "You can do whatever you want!" And he was upset by that. I liked how flexible the system was with its flashbacks and whatnot.

dysjunct replied the topic: #313542 27 Aug 2020 10:02
Great review. BITD is one of the very best games to come out of the hobby in the last few years. It’s inspired a bunch of spinoffs using the same core system — (i]Scum & Villainy[/i], a pseudo-Star Wars about scrappy scoundrels doing odd jobs and trying to keep fuel in their spaceship, Band of Blades, dark fantasy mercenaries a la Black Company, and others.

The graphic design is also really good. It makes running the game a pleasure, and tracking all the little cogs that make the world sing is easy.

For anyone thinking about running the game, this article is a great deep dive into clocks — how and why to use them.

hotseatgames replied the topic: #313550 27 Aug 2020 11:27
I bought this after Andrew McAlpine wrote about it here... read through most of it. It is still on the shelf, but maybe some day I will get to actually play it.

dysjunct replied the topic: #313648 31 Aug 2020 18:29
The PDF just dropped for Night Reign a thief game that Kickstarted at the beginning of the year. It's " Rooted in Trophy ," but much closer in feel to BITD. But, as Trophy draws heavily from BITD (especially the Devil's Bargain mechanic), in a way it's more coming home.

It's really, really good, especially if BITD as written is a little crunchy for you. It uses cards instead of dice, and specifically a blackjack mechanic -- the higher you get, the better you do in your infiltration; bust and you've overreached and are now discovered. Has a campaign frame around restoring a deposed dynasty to the throne.

The mechanics are (ahem) aces and underscore the push-your-luck aspect of spying/sneaking so, so well.

It's now out for general purchase here:
sinisterbeard.com/product/night-reign-zine-and-free-pdf/
Read More...