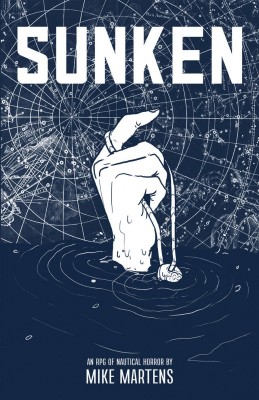 “The blessing of land is that nothing else can exist within its mass. The earth’s denizens may grow upon and disembowel caverns within it, always with the safety of knowing that the solidity of terra firma itself can hold no threat or mystery. With one’s back to the wall, there remains a wall to back against. Meanwhile, the sea establishes no constant: It is an unfathomable expanse above and below a diaphanous separation of air and water, where anything at any time may be.”

This distillation of the dichotomy of siren’s allure and abyssal terror redolent in our earth’s last true mystery -the oceans, is the first thing you will lay eyes upon after splitting the spine of SUNKEN.

In the realm of terrifying tales whispered by lamplight and embroidered by liquor, the fables shared by mariners are wont to be the most grizzled, the most terrifying and the most fanciful. It can be found in even the scrutiny-defying tales of weekend anglers as they posit the size of their catch, and only spirals from there, past parched doldrums and waterlogged corpses, plummeting all the way to the most lightless of depths where unblinking eyes crest phosphorous anomalies in a primal soup of silt and slaughter.

Hark as it calls to you even now. The briny tang of the ocean in all its piscean promise. Within the pages of SUNKEN, even the most landlocked can be startled by the keening of gulls as they caterwaul for carrion. So best fasten tight the latches, splinter your teeth on some hardtack and make sure you have plenty of antiscorbutics at hand as we proceed… 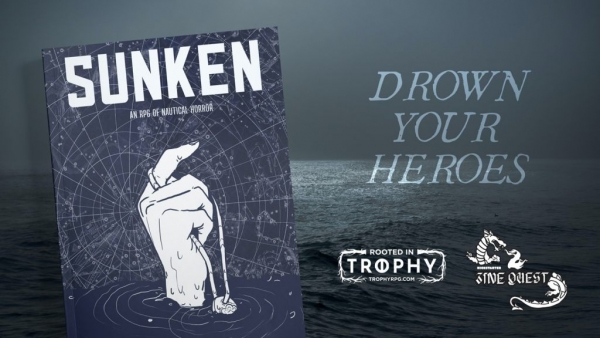 As a boon to you dear readers- in order to balance the unyielding dread of the subject at hand, this review will be peppered throughout with extracts of jaunty sea shanties hollered in tribute to that most timeless of maritime passions- the gentlemanly act of sodomy.

The work of one Mike Martens- the SUNKEN book itself is a thing of beauty that harnesses a masterful deployment of layout, typography and the images of antiquity to conjure a perfect thematic wellspring from which tales might tumble. Beautifully written with a consistent linguistic commitment to its themes, it immediately thrusts one into a smaller world than the one we have come to inhabit. A place of perils and privation set firmly in the age of exploration, where the computation of latitude is a strange miracle and the edge of the world might at any moment yet emerge over the horizon to send you plummeting into the forever.

Cannily drawing upon the collective commons, Martens has assembled a curated catalogue of public domain masterworks to grace his pages here. This selection of classic Gustav Dore and his ilk lends a universality to our comprehension of the world he is crafting, whilst simultaneously gifting it with the gilded rim of class. It looks swish as fuck and makes me long for a sturdy hardback edition to grace my coffee-table and stir stories of cannibalistic urges and equatorial bummings amongst my patrons whenever I entertain guests. 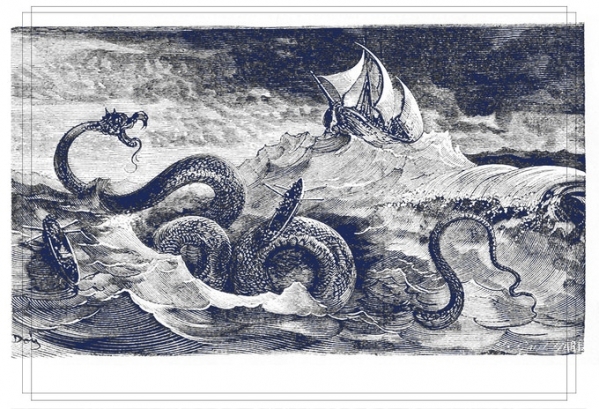 Rules light and rooted in the Trophy System– SUNKEN is a storytelling tabletop RPG with an emphasis on narrative and a penchant for doom. Two to five players will gather, with one taking the role of the ‘Helmsman’ who will guide the remaining players through a series of salt-chafed stories consisting of five chapters or ‘tides’ that will inevitably climax upon a shore awash with dire conclusions.

A place for heroism this is not, nor is it a place for looting, character progression or complex tactical encounters. The tales spun by SUNKEN are short and brutish affairs, shot-through with mystery and adventure yes, but tapering to a fixed barb at the business end of rusted harpoon. It offers players weary of Tolkienesque tropes the fatalistic opportunity to embrace their doom and recount the tragic tale together.

Mechanically – the tides of fate will have their currents corrected by three Barquentine masts of chance, each represented by a six-sided die aligned with the traits of the Flesh, the hold of the Deep and your faith in the Heavens respectively. Into this maelstrom of chance and circumstance, the players will hoist their avatars, carving their characters from the driftwood detritus of Occupation, Background, Fleet and Saint.

Within these four pillars lie the seeds to craft a foreword to your accursed memoirs, forging a backstory that sees you set with skills, siblings, supplicants and what manner of circumstance conspired to first hurl you into the yawning mouth and hellish heart of the sea. Ample maritime archetypes are accounted for within the slim volume proffered- from stoic company man to opportunistic freebooter, each in thrall to the capricious whims of their chosen patron deity -on whom they will surely have cause to call before the parable twists towards its grim denouement.

Your character’s aptitudes will be dictated by their trade- with Cooks, Carpenters, Navigators and Gunners all lending themselves to the task at hand with their various suites of expertise. Character backgrounds dictate traits, adding a more amorphous set of bolts to your quiver, fleets assign a flag to nail to the mast of choice – outlining the drive that speeds your heels, and saints of course presage the manner of miracles you will draw upon to perhaps keep faintly afloat in this age of sin and superstition.

When called upon to test this brace and ballast, the three pools of chance are represented by assigning a set of different coloured dice to each pool of Flesh, Deep and Heavens. Up to four can be pooled into the fates of the flesh and the deep, but your dalliances with divinity will rest on the roll of a single bone each time. 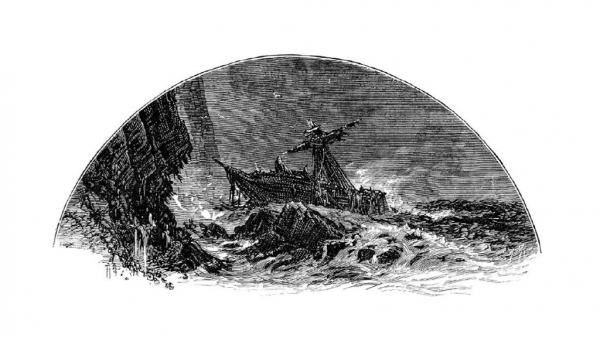 Rolls of flesh will test the mettle of your earthly vessel- be they feats of strength, resilient bouts of attrition with constitution, or sanity-shredding revelations to which you bear witness.  Should the task at hand be of particularly grave importance, one may wish to draw upon the pool of the deep – adding additional dice to your hand that represent a call upon the maddening power of the sea. But beware - for each dip into this Pandora’s pool, you risk accumulating points of Fall, a numeric tally of encroaching doom that threatens to engulf and upend you and your paltry plans. Finally – in the darkest hours before dawn, one may also seek to supplement their hand by drawing upon the heavens in whispered prayer, entreating entities to offer a lifeline of divine intervention.  Just hope upon hope that your prayers are answered, lest your trajectory tilt vertiginous in the fall of their silence. 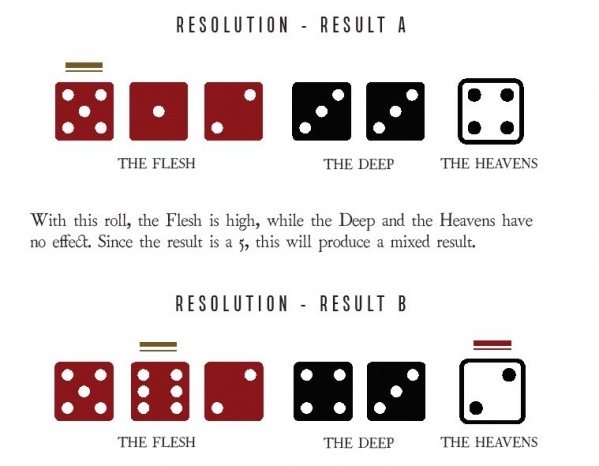 Tally your tokens then, and let fly in a single fistful – your highest roll determining whether you are met with startling success, a muted success beset with complications, or a dismal and demoralising failure. Conflict too is resolved with a single pooled roll as violent actions beget violent ends. In this, as in all aspects of play in SUNKEN, a narrative depiction of events takes precedence. Any successful roll is assumed to achieve the sought result, whether it’s a sweeping knockout haymaker, the slicing arc of a sabre or the thunderous blast of a cannonshot. It is in gilding the details that the game truly lies. 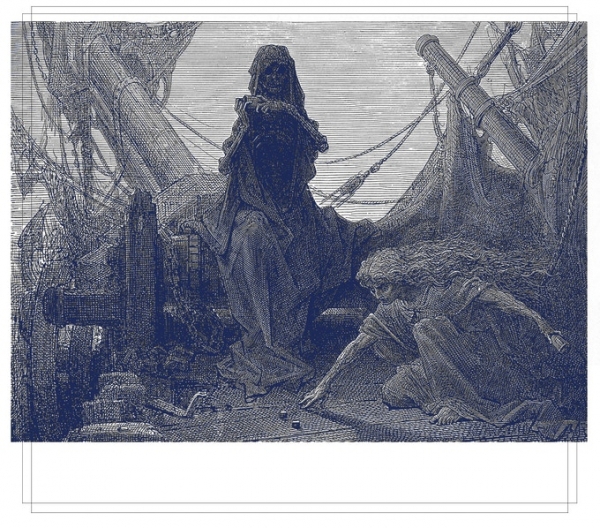 This simplicity, lifted from Trophy, though twisted and affixed with the waterlogged addition of the deep- allows the game to soar unencumbered by mathematical and statistical minutiae that must be endlessly tracked, cross-referenced and correlated. In service to the story it offers both strategy and agency as well as the hand of random chance to further shape the narrative with its raft of complications, and in keeping with the one-shot focus of proceedings, encourages players to remain tactful in their decisions whilst at the same time emboldening them to throw caution to the winds – embracing their fate and diving recklessly into their doom. There is no percentage here in yawnsome caution, and from such freedoms epic yarns are most often wont to be spun.

As for the stories themselves, the book comes replete with three such tales to torment your players. Separated into the aforementioned five tides, the escalating acts of Setting, Hook, Nature, Terror and Drowning plot a ragged course from prologue to epitaph via a succession of blights that befall the players as they seek to uncover the mysteries inherent in each telling. 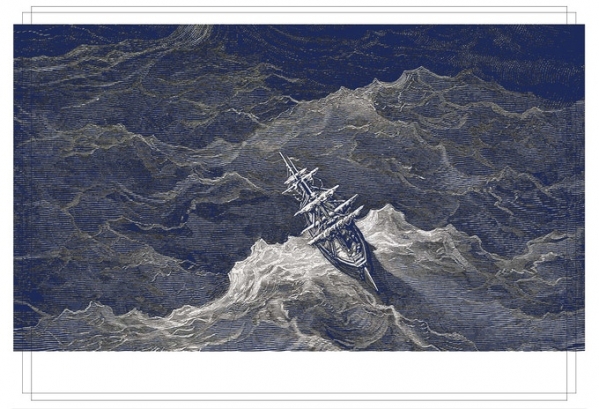 Beholden to its inspirations, the book is not shy in name-checking its cousins, and thus between the trio you will find references pulled from such familiar founts as Alien, The Thing, Bioshock and The Terror – that whilst nominally collegiate, tend to spin off in strange tangents that leave the trappings of the source material behind in some wickedly imaginative twists. Case in point is the second voyage ‘The Wreck of Futility’ that commences in the shadow of the real-world mystery of the doomed Franklin expedition before occult alien tendrils start to worm their way into proceedings and we are on altogether different footing than Dan Simmons in his own extrapolation of the tale.

Each voyage here is perfect material for a one-shot setting and presented in a fashion that is almost system agnostic. Instead of stat blocks and maps we are gifted with prompts and possibilities to seed a more expansive suite of outcomes, albeit ones that will call upon a gifted Helmsman and a group of players with a flair for the dramatic and improvisational. It’s an RPG with its focus firmly fixed upon the RP, and though the mechanics are simple to master, the lend themselves effortlessly to all manner of scenarios, be they static or emergent as the play of the tale is buffeted by the breeze of opportunity. 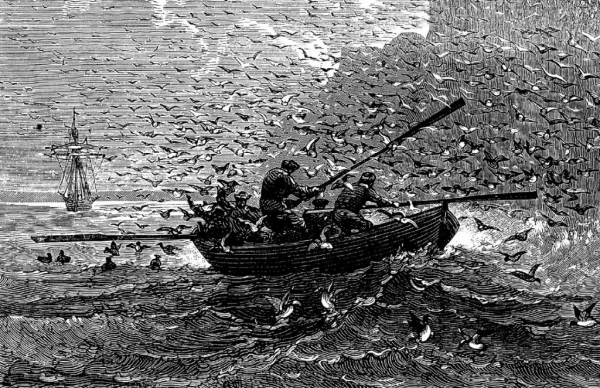 Rounded out with a selection of myths and whispers from the game world, a handful of shanties (sadly light on sodomistic stanzas), and a truncated glossary of naval terms, SUNKEN presents an experience that demands both little and a lot in determining what kind of experience it will bring to your table and by this point in proceedings you should probably already know if this is for you. I had scarcely finished reading its introductory paragraphs before it had its hooks in me, but that may be largely predicated on my existing obsession with tragic shipwrecks, scurvied gums, haunted harpooners and all manner of rum-soaked parables that recount maritime bondage and the follies of men.

If you have a similar saltwater streak in your veins, or you simply want to relish in the vicarious embrace of a horrific tale well told, and you don’t mind lacing yourself into the boots of the irretrievably doomed – this might just be your dream RPG.

You can find SUNKEN at DriveThruRPG.com.

Agreed- especially the ALIEN -esque scenario. As soon as the 'chest bursting' occurs then it's deeply obvious what has transpired. The twist on THE THING was cool enough though and I thought it rendered things wildly different in execution with that weird collective and plenty of room to make it your own, but then we're back to a fairly rote BIOSHOCK indebted scenario for the third.

It's important to note his eagerness to own up to all this though during the pre-amble to each scenario and in a way it's not so different to any number of 'you must prevent the dark forces from breaching the seal yaddyadda' type jaunts you get in D&D et al but yeah-this reliance on such familiar themes for its adventures is 100% the books biggest flaw. Apparently a 'bonus zine' is in the works for backers when the physical run goes out so perhaps we'll see something more unique amongst its pages.
Read More...