The Edge of Specificity - Troika! and Acid Death Fantasy Review 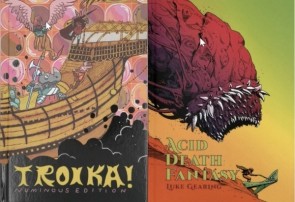 Adventuring in  the gaps.

Back when I was primarily a board gamer, I found myself quite often wondering why the fantasy worlds described by games are so hidebound – it’s always Howard, Tolkien, some post-World of Warcraft junk, or – god help us – steampunk. Maybe the seasoning is a little different, but the taste is usually the same. What I would look for were games more like Gene Wolfe or an Alejandro Jodorowsky comic, stuff that was more psychedelic or surreal. It turns out that all I had to do was take the tram on down to indie RPG town and there was plenty of that kind of thing. One of the first games I picked up when I started exploring the world of indie RPGs was Daniel Sell’s Troika, published by Melsonian Arts Council.

It's a small, 111 page book offering a rule set based on the old Fighting Fantasy system of all things.. It’s a streamlined three stat system using only D6s- Skill, Stamina, and Luck. Skill is your basic all-purpose test and you add relevant skill ranks to it to generate a roll-under number. You burn luck when you test it, but if it runs out you can recover it. Stamina is used to cast spells and is also your defacto hit point metric.  Combat is based around contested rolls and the initiative mechanic allows for variable round lengths, which I really like. There are a few more details provided; more in fact than some of the more minimalist “rules-light” RPGs afford but we’re still looking at an RPG system with just ten pages of rules – less than most board games these days.

The rules are easy and fun, but where Troika takes flight is in its intentionally vague, open-ended setting. The brilliant phrase “touching the edge of specificity” is a tone that carries through the entire Troika book. This is not one of those ridiculous games where there are endless maps, paragraphs and paragraphs of lore, and extensive details of the fiction. In fact, the setting is barely even a paragraph – portals, extraplanar spheres, non-euclidian labyrinths, et cetera. It’s suggested that Troika is a city, and maybe that’s enough to go on? I love this line from the introduction – “…the adventure and wonder is in the gaps.”

When I first discovered Troika, I was trying to pull together one of those big, book-based campaigns for the Leading Brand of role-playing games. I was doing all of this prep work, reading about all these events, characters, people, lore, faction politics, and so on and it was just completely exhausting me.  And that’s before trying to tie in player characters’ backstories and the events of our ongoing game. But here was Troika, where your randomly-generated character background might be Cacogen, a Rhino-Man, or a Parchment Witch. Or a tops-and-tails wearing magician rabbit like what my daughter decided to play. There’s a small description and a skill list for each stock background, but the rest is up to you. It's easy enough to create your own backgrounds as well, and of course there are tons out there in the community. There’s “just enough” of everything, from rules to details, to make Troika work as a conduit for endless imagination.

The spell list and bestiary are likewise “just enough”, right there at the edge of specificity. But also too, this is a book rich with Sell’s gentle guidance – for example, each bestiary entry has a Mien table which gives the GM a one-word random reaction or attitude with which to potentially present the encounter. The spells are mostly familiar fare, but the descriptions open up new possibilities with allusion and unique interpretations. I love the description of “Exchange Shape – “what looks like a hug is in fact fell wizardry!”

There is an introductory adventure included which does a lot, I think, to set the tone of the game apart from the standard fantasy RPG tropes. It’s a hotel-set scenario called “The Blancmange & Thistle” and it is like some kind of madcap, farcical cross between Lewis Carroll, classic Warhammer Fantasy adventures like A Rough Night at The Three Feathers and Discworld.  PCs arrive at the titular hotel and are trying to make it to their sixth floor room. That’s the adventure. There are Mandrill bellhops, a sweet old lady met in an elevator offering up magical bonbons, a stairwell full of spiteful owls, and a raging rooftop party. It is stuffed to bursting with plenty of foundational hooks for future Troika adventures.

Troika is loose, freeing, and unafraid to let a GM and the players run amuck with wild ideas without stiff rules or fake histories interfering with the joy of creating a bespoke science-fantasy world. But it does require that both the GM and the players be up for a potentially more absurd, more whimsical, and more unfettered experience than what many RPGs offer. I’ve found that it suits the kinds of games I like to run the best, because for the most part I believe that RPGs are as much about improv comedy as they are about heroic adventure bullshit. I’ve also found that Troika is great to run for kids or very inexperienced role-players. These kinds of players are more likely to appreciate the leeway they are given and are much less likely to be fussed that one character background is unbalanced or that a turn of events doesn’t make logical sense.

The new second printing of Troika is out there now (I recommend buying direct from the publisher or Exalted Funeral), and it’s a lovely book with clean design and some outstanding illustrations including several from Dirk Detwiler Leitchy, one of my favorite RPG illustrators currently working. They also did that cool thing where helpful tables and information are printed in the inside covers. Definitely one of the top titles in the current RPG renaissance that is going on right now.

Now, Melsonian has also just released Luke Gearing’s Acid Death Fantasy. The title alone made this one a must-have as far as I’m concerned because it more or less sums up exactly my tastes. This is a 45 page hardcover that is something of a setting book for Troika but perhaps “inspiration book” is more appropriate, all things considered. I think there is a big miss here in that this book doesn’t have a introductory scenario like “The Blancmange & Thistle”, because this book really takes Troika into a different – and more specific - direction while still carrying forward that “edge of specificity” design brief. I really would like to have had a kick-off scenario here if only to have something ready to play out of the gate.

What’s here though, is gold. This post-apocalyptic world sits somewhere between Dune, Dark Sun, and Jean-Girard Moebius. So, frankly speaking, Mr. Gearing had me from page 1. By page 2 he was done describing the setting of Acid Death Fantasy and I was left to my own devices. But there is a little more to work with in terms of raw materials – just don’t expect detailed dungeon maps, extensive descriptions of the Thousand Sultanates, city descriptions and so forth. There’s a rough map and a “stuff to do” list of potential activities, and of course lots of nuance and subtle detail comes out in the list of PC backgrounds (all of which are compelling) and a new bestiary. There are other places to find nuggets of inspiration for storylines, plot hooks, or random weirdness, such as a “Current Fad of the Moment” and a “Trouble Afoot” table.

In short, this book offers plenty of elements for an Acid Death Fantasy one-shot or ongoing campaign, but it will require the GM to do a little more work to develop storylines or campaign material. But note that when I say that, I’m still not talking about the kinds of massive prep chores that some players of the more popular RPGs conduct. If you do all of that, I think you are missing the point of games like Troika, where improvisation and making things up as you go is where the magic happens. This is a game where, in its intro adventure, it suggests that you make up a skill mid-game to give players for a specific test.

Both of these books are light and liberating, artful and absurd. I love (and own) almost all of Melsonian’s books and in the coming weeks I’ll be covering some of their other releases. So stay tuned. One of the great rewards of writing about games is to be able to expose folks to offbeat, progressive, and under-the-radar titles and it is my great pleasure to vouch for these excellent books.

As usual, There Will Be Games does not accept payment for any of our content but Melsonian kindly supplied us with a package of review copies.

jason10mm replied the topic: #315989 06 Nov 2020 20:10
I used to love buying little rpgs like this when I was younger. Either setting heavy with minimal rules or rules juggernauts where the setting was just an excuse to throw dice at each other and look up stuff on endless tables.

Alas, never enough time these days but I like to live vicariously when I can