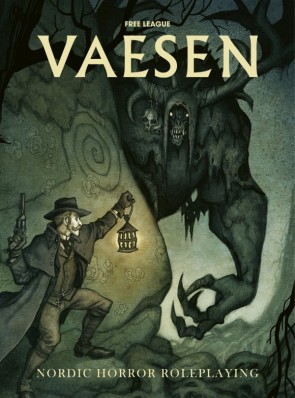 Free League’s Vaesen intrigues out of the gate with its tagline promise of “Nordic Horror Roleplaying” and an unusual source document – Johan Egerkrans’ Vaesen: Spirits and Monsters of Scandinavian Folklore, itself a lovely book full of the author’s Rackham-esque illustrations and spooky stories. As with most of the publisher’s titles, it is based largely on Tomas Harenstam’s excellent Year Zero Engine design which uses a standardized D6 dice pool resolution system. It’s once again revealed to be a versatile platform with a few bits and bobs plugged in to suit the subject matter.  Set in the 19th century, the game occurs roughly in the same Victorian era as classic English gothic horror, striking out a uniquely evocative and sometimes quite beautiful atmosphere at a time when metropolitan change and progress contrasted with rural folk beliefs and traditions.

Players step into this world as one of a few archetypical characters. Each are a “Thursday’s Child” gifted with The Sight, the ability to see Vaesen. The Vaesen are the creatures, spirits, and entities of the Mythic North ranging from well-known types such as Trolls and Ghosts to ravenous Lindworms and a siren-like musical being called The Neck. The players join together to form the Society, a group of Sighted individuals headquartered at a castle in Upsala. From this base of operation, they will set out to investigate and resolve incidents involving Vaesen as the encroachment of modern civilization into wilder areas has increased the frequency of their sometimes hostile encounters with humanity. Character details, as in all Year Zero Engine games, include plenty of tantalizing role-play hooks including motivations, suffered traumas, relationships, and dark secrets. Statlines are four elements – Physique, Precision, Logic, and Empathy – with skills corresponding to and providing bonuses for specific skills. Each character may also have one or more special talents that help to round out their capabilities and potentials.

But in addition to characters, the players also must develop the Society’s headquarters in Upsala, which means spending accrued Development Points on improving the facilities as well as staffing.  The mystery at hand may require a Weapons Corridor…or a Séance Parlor. They may also spend resources on procuring contacts – perhaps the medicinal services of a Gardner might be needed when fighting a Vaesen with a poison ability or a Mystic who might be able to decipher the function of a mysterious artifact. Astute readers will no doubt realize that all of this is really the same as building a stronghold and acquiring retainers or henchmen in more traditional fantasy RPGs, but these elements here serve to increase the sense of place as well as the purpose of the player characters.

With a team of Academics, Detectives, Writers, and Vagabonds thusly assembled, the suggested format is to run the game in Mysteries, scene-divided segments in which a situation involving a potential Vaesen is introduced followed by some preparations and travel to the investigation site. Where it starts to get really interesting is that the Mystery may or may not be resolved in the way you might expect, and the conflicts at hand may take a different form.  It seems that sometimes the best way to beat a Vaesen – whom are neither good nor evil – is to simply find out as much as you can about them. The big finish is more likely to find players conducting a complex ritual or exploiting a weakness they’ve discovered than fighting a monster with bullets and blades.

The bestiary is absolutely wonderful, and I’d rank it among the best I’ve ever seen and not just because of Mr. Egerkrans’ artwork. There are the usual stats In addition to the usual stats, what kinds of magic it can use, how much fear they can cause, and so forth.  There is a list of Conditions for each that indicate what effects successful attacks against them may incur, which can change their behavior and modify their dice pools. I love this as a GM as it gives me some ideas as to how to run one of these encounters for maximum impact. It suggests much more complex monster behavior, with unique Conditions for each Vaesen. But even more useful, there are also narrative examples of howeach Vaesen may come into conflict with humanity- these are great story hooks and with just a paragraph there is enough material to build a complete Mystery around each of them. Each Vaesen also has a secret, which may reveal a specific weakness- which, of course, may be the MacGuffin your players are looking for as they explore and investigate the mystery.

There’s so much wonderful lore in the book, including some details about Upsala in this era and even magic that players may have access to. Plenty of GMing advisement is provided, which I think this game really needs, and there is a short Mystery included that I also think is essential as it provides a great example of the kind of fairy tale-like horror that this game is trying to express.

Now, for the downside of this otherwise marvelous book. I think this game is stupendously dependent on the GM and their understanding of the tone it is trying to put across. That tone is, in my estimation, something very close to the beautifully chilling video game Year Walk, also a Swedish production. In fact, some of the creatures and spirits from that game are represented here – the Brook Horse, Mylings, Church Grims, and Night Ravens. If you’ve played that game, I think you’ve got a good idea of what I think this game is going to do best.

But remember too that this is not Cthuloid cosmic horror, it’s not a zombie survival story. It’s a game about mystery, wonder, and sometimes horrifying revelations. Puzzles, clues, and leads are paramount, and it means that a proper Mystery needs to be well-written, well-prepared, and consistent with both the setting as well as the bespoke narrative generated by character backgrounds and in-game events. Those who have played around in the more investigative side Call of Cthulhu (as opposed to the “tommy guns versus Mi-Go side) will find familiar concepts here, but I find that this game has a more melancholic, somber feel. Some of that comes across in its themes, the sense of old ways and beliefs giving ground to modernization and urbanization. But it also might come across in tragic reasons the players may find behind a Vaesen’s hostility or antagonism, and I think the better sessions of this game are going to speak to these concepts

I find that playing this game as a GM is pretty challenging (especially given that I am a low-prep, lazy game runner that is often racing around an hour before gametime to pull something together) and out of intimidation I am absolutely not interested in writing or developing any kind of custom material for it – mainly because I’m not sure I can do these horrible, majestic creatures justice. I love this game, but running it in the future will be strictly with published Mysteries. Free League is just about to release a collection of them and I am looking forward to seeing what kinds of haunting, horrifying tales they spin. I trust their writers with the subject matter.

Before we close, a note on diversity and representation. This game is presented explicitly as being about Northern European folk horror, and as such it is inherently Eurocentric and it depicts a time and place when gender roles were unenlightened. Given how Nordic anything tends to attract “Rune Goons” like the racist Varg Vikernes, I especially like that the writers have made it clear that this is not a historical book and it is open to all. I particularly love this line – “we see no reason to let historical injustice limit the options available to players”. Bravo. I also applaud the section of the book which gives some ideas about how to take the concepts and themes of the game into other folklores – indeed, you can play Vaesen with spirits and entities from African, Meso-American, or Middle Eastern mythology if you choose. I’d love to see a Mystery set in the American South based around the Cherokee myths of the Raven Mocker, a very Vaesen-like creature that eats the hearts of the dying and replaces their decaying body with parts of their victims.