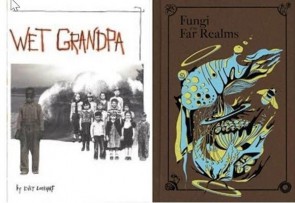 Game Name
Designer
There Will Be Games

Let’s have a look this week at two of the more interesting books on my RPG game shelf, shall we? Both of these books were supplied to us for review by the fine at the Melsonian Arts Council, publishers of Troika! and other gaming publication of taste, class, and dignity. As usual, TWBG does not accept any payment for reviews.

What could possibly get your D&D group more excited than announcing “hey gang, I think we’ll run Wet Grandpa next session.” Then you show them Evey Lockhart’s book- in rustic Coptic binding and with an almost folk art look. “It’s about this soured, run down fishing village where this old dude fell into the water and drowned but then came back changed.” By now your Paladin and Warlock are likely raring to go and they aren’t even disappointed that it’s not gonna be Rime of the Frostmaiden, am I right?

Smartassery aside, Wet Grandpa is yet another great Melsonian Arts Council book and it is a singular piece of work quite unlike anything else in the RPG adventure writing racket. If those big ol’ modules made for the Leading Role Playing Game are like Iron Maiden epics, this little book is more like Trout Mask Replica. It’s angular and uncomfortable, vague in places yet illustrative of a very specific atmosphere, tone, and place. The writing is maybe somewhere between Cormac McCarthy, Nick Cave, and Tom Moldvay. It’s Southern Gothic by way of fantasy roleplaying games. “He died at a rate he felt very unfair” is a million dollar line if ever I read one. Lockhart’s writing is what makes this book something special.

There are strong themes. This is a story about a boomtown exploited to death and abandoned, you could say it was strip-mined but it’s a fishing village that has simply run out of resources, leaving behind a few odd folks that just can’t get out for various reasons. It’s about destitution and desperation. There is a pervasive atmosphere of exhaustion and the kind of low-grade misery that just sort of glues you down. There is some tonal resonance with Patrick Stuart’s seminal Deep Carbon Observatory, meaning that this is mostly a downbeat roleplaying adventure.

The standard adventure trappings are there- a treasure map, four river Naiads guarding several thousands of SPs worth of trinkets, a River Encounter table, the titular Wet Grandpa growing into a soggy necromantic/hydromantic threat, and trim statlines compatible with any B/X derived system or anything else with a minimum of conversion. The most important rule introduced is “If The Party Falls In The River”. The compelling cast of NPCs, such as Kristine, who “will not survive another beating”, or a pair of teenage girls hooked on psychedelic God’s Eye berries ensure plenty of interesting RP opportunities. And then there are the children that ol’ Grandpa Jedlin took in before his unfortunate demise.

Maybe this isn’t for everybody, but I love this damp, moribund book. I’d love to run it, but I can’t help but wonder if the usual bands of Yakety Sax bozos I run games for might spoil the precious atmosphere. Maybe you can fit this in a campaign setting, I don’t know. I think Wet Grandpa is better suited for a long one-shot, with players rolling up doomed level-1 ne’er-do-wells.

Fungi of the Far Realms

This Melsonian publication, with its stuffy brown library binding and three color embossed cover, looks like something a mycologist might have checked out of a library circa 1981. Within its pages are over 666 mushrooms and other fungi described by Alex Clements in terms of their habitats, appareances, flavor/mouthfeel, and aroma. Each is uniquely illustrated by Shuyi Zhang in a lovely, watery style.

So yes, Fungi of the Far Realm is a 240 page book about made-up mushrooms intended for use as an RPG sourcebook even though there are less than 20 pages of actual rules, tables, or gameplay advisement. It’s a fictional piece of naturalism, but also a fecund spore-log of ideas and concepts that might inspire you to introduce mysterious, magical, and potentially deadly mushrooms into your game. Or maybe the book itself exists in your game, inspiring a plot hook. Maybe the party has to reference to figure out if the Aquatic Chanterelles they found are edible. Don’t be fooled into thinking that a sourcebook this specific and focused isn’t useful – you might be surprised at the inspiration and creativity this guide offers.

The range of effects and characteristics is wild. #514, the Psygoblin Mushroom, awakens innate psychic powers in any Goblinoid until they die of an aneurysm 8 hours later. Non-Goblinoids just get the aneurysm. Canines can’t resist rolling around in the musky scent of the Hound Cake (#343), which might be an effective deterrent to any guard dogs or dire wolves. The party would do well to identify the Fool’s Truffle (#264) before cooking it up as an ersatz ration as the “pleasant, nutty” scent masks a flavor described as “excrement”. Then there’s #544, The Seven Hermits. Legend has it that only seven of these mushrooms grow each year, and if someone eats all seven (which taste like beef consommé), they are granted an audience with a god.

I love the singular focus and commitment to an idea that Fungi of the Far Realms offers. It raises eyebrows and confuses people. It looks and feels like an esoteric book you find at an estate sale or in the nether reaches of a second-hand book store, where you pick it up and wonder why it even exists. But beyond novelty, there is solid usability here. It’s one of the most unique RPG tomes  I own, and I treasure it for that.

ChristopherMD replied the topic: #320060 04 Mar 2021 14:58
I have that Fungi of the Far Realms book and really like it even though will probably never get used. Not sure how many RPG's have a mycologist option or even a foraging skill. I think my favorite is the mushroom that makes you fart flames if you eat it but then your anus gets some fire resistance.

jason10mm replied the topic: #320112 05 Mar 2021 10:56
That fungi book sounds like it is CLEARLY a catalogue for ordering hallucinogenics online that has been cleverly disguised as an rpg supplement!

Kind of like how folks were trying to say weird high dollar furniture sales were covers for prostitution or whatever.

Hmm...now i wanna make a mary jane version, just call it "The Guide to the Halflings Leaf: The herbs of Middle-Earth". Bet it will sell gangbusters in states where they havent legalized pot yet