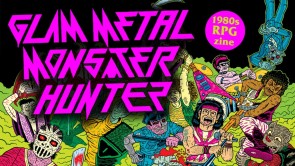 Of all the musical movements to have captured the popular imagination over the years, the brief technicolour explosion of 80’s cock rock arguably had the most glaringly obvious use-by date.

Wildly resonant in an era of Reaganomic excess, this tawdry eruption of imbecilic hedonism managed to suffuse the world in a dizzying cloud of Aquanet hairspray fumes and widdly-diddly guitar solos, lacquered over teenage anthems to fast cars and sweetened baked goods that even the most sympathetic observer would concede was overwhelmingly fucking stupid.

Fortunes were tallied by fat cats as legions of starry-eyed aspirants hitched their wagons to this scented special-bus, as they drank, drugged and debauched their way through a treadmill of albums, tours and saccharine power ballads – before being spat out at the end of the decade – spent, broken and irrelevant, whist the record executives gleefully moved on to conspire in the death of Kurt Cobain. 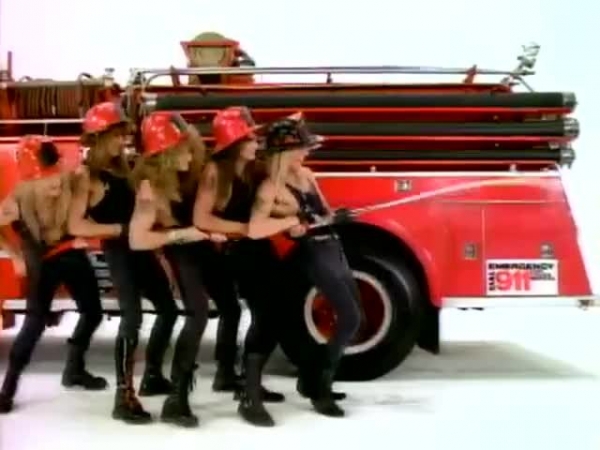 The nadirs were numerous. Chris Holmes in a swimming pool. The front-man of d-tier also-rans ‘London’ failing to ignite the soviet flag, the singing voice of Vince Neil. Cherry fucking Pie. And yet…

…a fondness remains. Somehow – after the dour incursions of grunge, industrial and nu-metal, this bloated liver of a movement limped on to bask in the stultifying rays of nostalgia. Aging burnouts and soccer moms tilted wistfully to reminisce about Tawny Kitaen cavorting on the bonnet of a sports car. And a new generation, too young to remember the IQ plummeting clamour of it all, sought some kind of tacky anti-glamour, sifting through the detritus of their uncle’s record collection to Unchain the Night, generating a mini renaissance of sorts for leather pants manufacturers everywhere.

And is it any wonder? In a world beset by economic, environmental, and eschatological uncertainty there’s something weirdly cathartic about embracing the adolescent fantasy that Glam Metal proffered. Plus- it’s always fun to play the bad guys. There are no paladins here. 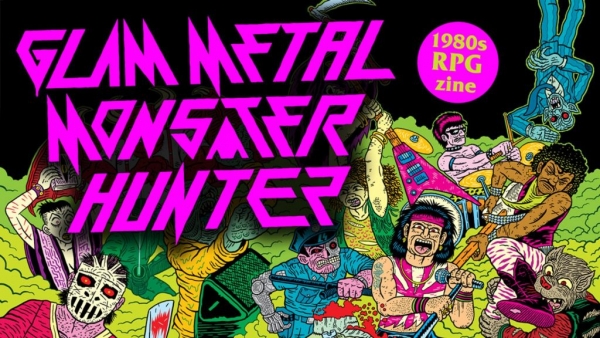 Presented in a slim zine format, Glam Metal Monster Hunter is an RPG/ story-telling game that offers players the chance to embody the sequin-slathered cowboy boots of their very own cadre of freewheeling, codpiece clad cretins as they do battle with the armies of the night and force their stripper girlfriend to pay for their groceries.

Light on both rules and setting-it assumes familiarity with the milieu it is celebrating/parodying, knowing that the real-life history of the movement is ripe for plunder and that the aesthetic smear is already burned into our collective memories by countless album covers and foldout posters culled from Hit Parader and Circus magazine.

It knows its audience basically.

Rolling up a group of characters with totally rockin’ names like Roxxy Coxxx or Lance Thruster, players will select an archetype or ‘gig’ such as The Face, The Virtuoso, The Critter or The Slayer. These are basically your character classes and unfortunately-one of you probably has to be Mick Mars. 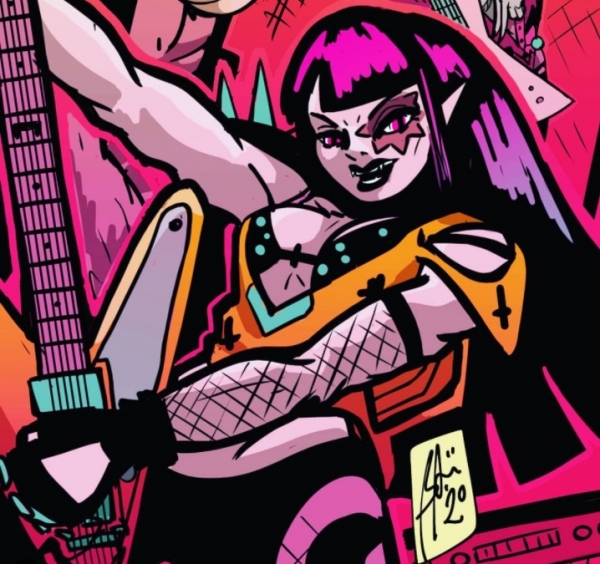 Players will pick an instrument for their characters, (even bass!) and then choose a totally killer and very clever band name like ‘Leathür Shaft’ or ‘Hot Snakkke’ within which they can ascend to the giddy heights of stardom and squabbling over backstage pistachios.

The dysfunction inherent in every group is represented by a system of ‘hang-ups’ requiring your group to tread carefully around the idiosyncrasies of the likes of the Prima donna, the party animal and the no-talent hack. This is a pretty delicious seed for intra-party dynamics and is bound to give birth to countless Colin Grigsons as players delight in the bickering minutiae that accompanies every cramped van-ride to adventure.

In keeping with the attention-spans of our scholarly avatars, character stats are whittled down to four main characteristics:

Glam – How many scarves you have draped around your microphone stand

Metal – How many necks your guitar has

These core stats are rounded out by:

Vitality – How much heroin you can safely shoot into your dick. (Essentially your hit points)

Star Power – How well the spotlight catches the hem of your tassels.  (Essentially a combination of experience points and burnable resource for re-rolls)

These stats will be rolled against when performing any kind of action check (referred to herein as ‘Taking Care of Business’) at the discretion of the GM or ‘Manager’. 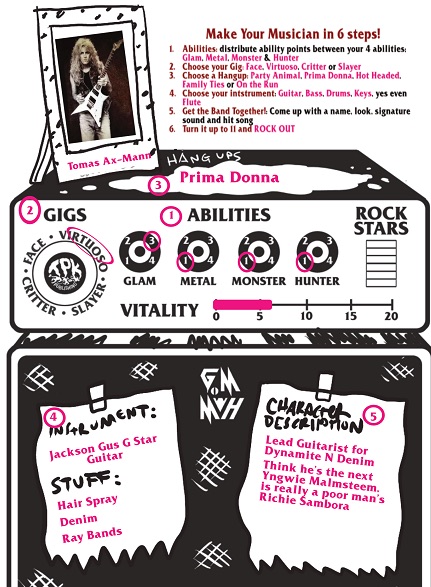 It’s fast, it’s loose, and it provides just enough mechanical framework to bolster the main draw here, which is the story-telling element. This is not a systems heavy affair, with even the combat mechanics being a slight variation on the aforementioned ‘Roll dice, add stats, consult table’ arrangement.

Adventure seeds stem from rivalries with other musicians and groups, dealing with record industry mooks and security personnel, making deals with the devil and the titular ‘Monster Hunting’. Honestly- this last element seems a little tacked-on and is perhaps merely the vestigial tail of most RPG’s still plying their trade in a Gygaxian shadow.

Managers are encouraged to take their cues from the golden age of home video nasties in conjuring legions of the damned with which our ‘heroes’ will do battle – the likes of Trick or Treat, Black Roses or the immortal Rock n Roll Nightmare immediately springing to mind as worthy inspiration.

But I imagine the most fun here will be had leaning into the excesses and banalities of reality, with adventures that embody everything from the ignominy of touring the regional bar circuit, to the sinister machinations of ‘Cosmosodomistic Records Incorporated’, to attempting to procure enough flash-pots for the triumphant video to your debut single about the tyrannical age of consent.  It’s all a rich tapestry, and if the game itself skimps somewhat on providing a deep dive into framework or lore, it’s again because we know this shit already. VH1 is your sourcebook here. 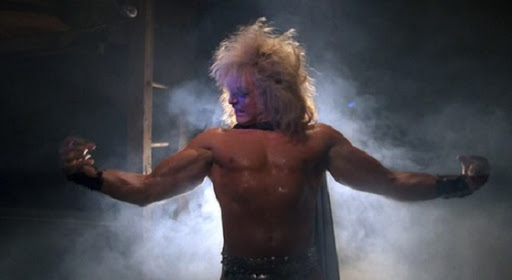 So if you’ve ever wanted to banish an army of demons using only a series of variations on the seventh fret pentatonic scale, or you have a bunch of very clever ‘Motorcycle as Woman’ analogies you’ve been dying to use, then Glam Metal Monster Hunter is definitely the game for you.  If its tone is a little too celebratory in a kind of cloyingly Jack Black-esque fashion then at least it doesn’t take much effort to lead it down a more satisfyingly sardonic path as you pen your own tales littered with cautionary farce. Either way you embrace it it’ll probably be a funny-as-shit good time as you either unfurl your bandanas in celebration or sink your snakeskin heels into some low hanging fruit.

Now if you’ll excuse me I need to find a store that sells 30 foot inflatable phalluses before tonight’s gig. It’s for a statement on gender roles. With a drum solo.

jason10mm replied the topic: #322440 22 Apr 2021 13:43
If any of my "ever a bachelor" childhood buds ever get hitchitched and bring us all back together, that is definitely gonna get played.

Started listening to sirusxm's Hair Nation and a lot of that music does hold up really well, especially in contrast to today's moody emo rock. Of course the LYRICS are a whole 'nuther thing, goddamn some of those songs were creepy ("Every breath you take" and "Seventeen" woooooah).

This would make for a fun show. There are a lot of monster hunter formats that try to hammer it into mundane lives but a glam rock band on tour.....yeah that works!

jason10mm wrote: Of course the LYRICS are a whole 'nuther thing!

I dunno man, if you consider their uncanny ability to rhyme 'teasin' with 'pleasin' and 'action' with 'satisfaction' in basically every song then the genre is something of a poetic high water mark.
Read More...