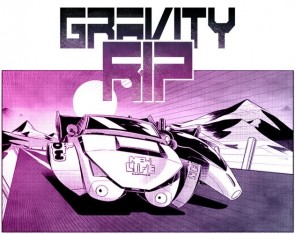 We’re going the distance. We’re going for speed. We’re all alone. All alone. Apart from the GM and other players in the pulsating, high stakes world of anti-gravity racing. I’m sure those are the lyrics.

Gravity Rip written by Luke Westway with art from Colin Craker, is one of the current breed of indie RPGs which embrace a quick setup, fast play, and high action. From the time Jamie suggested we play it when our Blades game fell through, to starting to play took about 20 mins. Hank McLargehuge, yes that is an MST3K reference, and Buster Gordon, that isn’t, sprang quickly to life. Hank embraced a chaotic off track persona and a big muscle steed, whereas Buster took the more Theoretical lifestyle and a lighter rocket.

Arriving to the first race of the season, they dealt with hints they were replacing dead men, where the bar was, new mechanics on the team, lucrative favours for a skeleton in a cloak, and, of course, a rival team. The play ‘off-course’ is quick flowing and full of nice hooks to improvise off. A very simple dice system gives you straight success or failure on the roll of a single d6 compared against your theory or chaos score, and where you have chosen to plant your flag along that scale. I believe it employs a similar system to John Harper's Lasers and Feelings.

Teleported to the race Hank and Buster immediately found themselves in the thick of the action. A three lap race was on the cards and they gave as good as they got, bashing cars out of the way, blocking to let their team mate through and inflicting as much damage as they can on Chet (it’s what the Skeleton wanted and we are suckers for bribery).

There is a tasty tactical set of mechanics during the race segments, giving strategic choices without slowing down the flow of the game to a crawl. It’s fast, brutal, and exciting with lots of room to help out your team mates, or even bump each other out of the way for some in team rivalry! The switch to a more strategic element does not get in the way of narrative either, allowing players to interpret results whilst giving them a grounding in where they are in the race, and how they can get to pole position.

I loved my first play of Gravity Rip. It’s light, fast playing, and dramatic. I really think the future of tabletop RPGs lies in more approachable, lighter games like this, that have a good mechanical basis to help the players along when they struggle for narrative. A quick setup, evocative theme, and easy to teach mechanics makes for an almost board game like experience, and I am here for more games like this.

This is a first thoughts review from a player’s perspective of Gravity Rip. I have not read the game or run it as a GM, just played it as run by Jamie.

Shellhead replied the topic: #323613 01 Jun 2021 12:12
I love the Cake lyrics at the start of the review. I'm an old school role-player, so it feels instinctively wrong for an rpg to be based on a dramatic situation that is not a combat. But I have dabbled in more modern role-playing games from time to time, so I recognize my bias and have been able to overcome it from time to time.

thegiantbrain replied the topic: #323662 03 Jun 2021 07:07
I'd strongly recommend checking out the less mainstream games, that is where the really good stuff in RPG design is happening these days.
Read More...