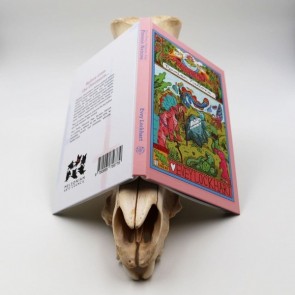 A South African paleontological dig back in 1975 unearthed strange bedfellows – inside the burrow of a Thrinaxodon (a prehistoric protomammal) were the fossilized remains of the assumed homeowner and also those of a Broomistega, a contemporary early amphibian. Were they friends? Evey Lockhart’s Very Pretty Paleozoic Pals: Permian Nations seeks to answer that question with a resounding “yes”. Newly published by those esoteric TTRPG mavens at Melsonian Arts Council, it’s a delightful, charming, and imminently weird “sphere” (or setting) for their popular Troika! rules set.

It’s quite a departure from the soggy Southern Gothic of Wet Grandpa, also from the same author, but it is no less dimensional, layered, and inventive. This is a gaming world where players take on the roles of Thrinaxodons and Broomistegas or Dimetrodons, Ulemosaurs, Ammonites, Nautiloids, and Xenocanthuses. They’ve all joined together in harmony under the Accords developed by Queen Sunshine Brightspine (a Xenocanthus), agreeing to a peaceful and mutually beneficial co-existence that includes strict rules about not eating each other. Together, these Permian Folks have developed a sophisticated community in which each of their unique qualities – the Dimetrodon’s fashion acumen, the Nautiloid’s academic bent, and so forth– contribute to a peaceful prehistoric utopia of mutual respect and cooperative community. This is all very adorable, driven home by sweet illustrations including a lovely pastel cover showing the signing of the Accords.

But there is also a strong anti-colonial message beneath the whimsy. An earthquake has torn open the barrier between this sphere and another. A bucket of apples dropped through and their seeds begat an invasive species, interfering with the Paleozoic biome. And then, the humans started to appear, believing the Permian Folk to be “demons” and sizing up this strange new realm as another land to conquer and exploit.

This is all fertile ground for storytelling, provided that the GM and group are willing to really dig into playing these Paleozoic Pals. There are 18 new backgrounds in the Troika! format of course to give you something to work with as well as a list of new skills and spells. Of course there is a brief bestiary which includes the great Mien tables for each entry to give the GM something often unexpected to go on in terms of creature behavior. There are two adventures included, one which puts the players in a fairly straightforward adventure involving direct conflict with the encroaching humans and another wildly psychedelic and more cosmic one. There are plenty of encounter tables, NPCs, and other support describing the setting, environs, and denizens; even though it’s a slim volume it feels robust and full of life. 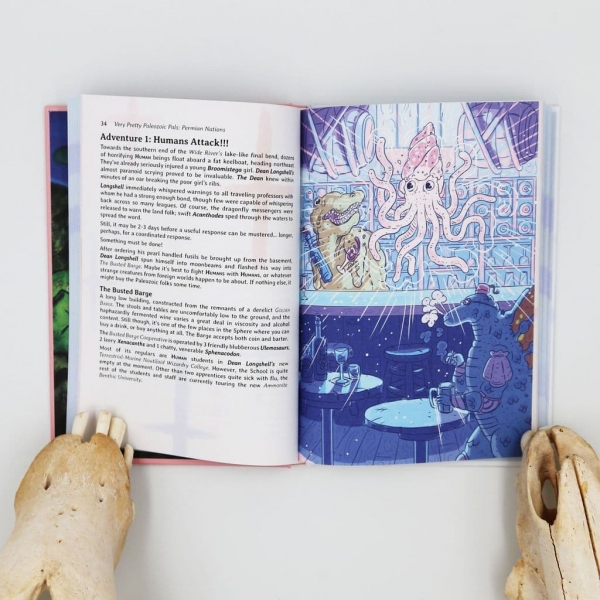 Like Wet Grandpa, Lockhart’s writing really shines throughout the book. It’s a pleasure to read and I found myself nodding and grinning at several passages. More than that, reading through it made me excited to run a game. So naturally I recruited my two kids and a couple of their friends to try it and it turns out that this is a perfect game for their age group. They got right into the concept and didn’t bat an eye at playing a brightly colored, air-swimming primeval shark with a long head spike or ancient mammal with a penchant for invention that is buddies with a Wizarding Nautiloid. They also got the anti-colonial politics of it right away, and I can’t say that they have a fondness for Sir Fredward Swordbloom and the crew of the Gutted Shark.

It is also the kind of book that I think some groups will bounce right off, dismissing it as a novelty or a distraction from a larger, more dungeony or dragony game. Which is fine, whatever, but this is the kind of small press TTRPG book that I often find more inspiring and compelling to read than the standardized corporate offerings. This is wild space, much more of a frontier, offering to make good on the promise that TTRPGs can offer limitless imagination and possibility.

Further, I especially appreciate how it demonstrates the flexibility of Troika!, which is one of the best rules-lite systems out there right now. Based on the old Fighting Fantasy RPG, it’s all very simple and truly feels more like guidelines rather than strictures – as RPG rules should feel. This enables a singular setting like this one to really come to full fruition – not because the rules say so, but because the GM and players can take the bits and pieces and put together something unique and sometimes wonderful.