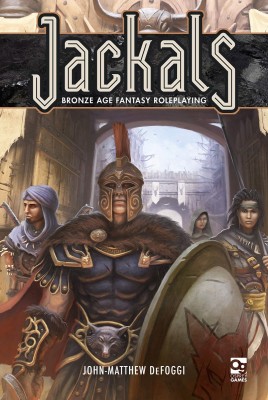 Game Name
Jackals
Publisher
Osprey Games
There Will Be Games

Osprey is at it again with another pair of great TTRPG volumes.

Jackals, written by John-Matthew DeFoggi is a “historically adjacent” TTPRG from Osprey that slots in nicely alongside similar titles in their catalog such as Paleomythic and Romance of the Perilous Kingdom. This time out it’s fantasy-inflected Bronze Age setting that draws heavily from Greco-Roman, Persian, Egyptian, and Mesopotamian sources and casts the PCs as the titular “Jackals”, a social class of wandering adventurers/troubleshooters/treasure hunters/roustabouts that are described as being fully welcome in a town when needed, but asked to move on after the trouble has passed. An ambitious new campaign book for Jackals has just released, Fall of the Children of Bronze, that aims to present a truly epic multi-year narrative for your Jackals as they witness and participate in the fall of a City-State and the rise of a new unified kingdom. Osprey was kind enough to share some PDFs of the books and it’s been my pleasure, as always, to have a look at this company’s almost uniformly great work.

I was immediately impressed by the tremendous world-building and care given to establishing the world of Jackals. It captures that “familiar, but different” balance that characterizes a lot of top fantasy settings. The setup is that this particular region of the game world, Kalypsis, has only just recently freed itself via slave revolt from the yoke of the Takan (sort of analogous to Chaos Beastfolk in other settings) and is now struggling to establish lasting civilizations. There are multiple cultures that comprise the setting with fairly easy to map real-world antecedents, completely with varying languages, traditions, values, and lore. There’s just a ton of setting material to play with, even before you get into the excellent Bestiary full of various Beastfolk of course as well as Undead and fauna. Even if you don’t play the Jackals rules, with a few conversions this well-illustrated, well-written book could easily serve as a setting guide for the TTRPG rule set of your choice – and I think it’s better than the similarly-themed one published by the Leading Brand a couple of years ago.

As far as the system goes, it’s a mix of fairly standard and fairly detailed – a core six stat basis with derived bonuses paired up with a solid  d100, skills-based schematic that gives it a little more rules weight than some of the key games in the hobby today. Most of the game is par for course, but I did find myself “huh”-ing and nodding affirmatively at some pieces, while also furrowing my brow at some of the heavier elements. I’m particularly more critical of weighty mechanisms because I always ask if the rules are absolutely necessary for the players and the GM (here, the Loremaster) to generate challenging situations, emergent narrative beats, and a good time.

It feels somewhat more complicated chiefly due to detailing factors such a “Clash” mechanism whereby combatants can spend Clash points to turn an opponent’s attack into a counter-attacking opportunity. There are also CRTs (combat resolution tables, youngster) to compare Criticals, Successes, and Failures to determine outcomes for fights or contested actions.  There’s Valour to consider, which are influenced by Mettle and Wounds. Skills are a primary focus and info like the finer character shaping that a good skill list can provide.. We aren’t in Pathfinder 2.0 territory but it is a more detailed set of rules even before you get into corruption, scarring, and Rites (the magic system, full of fairly typical but colorfully described spells which require Devotion Points and Clash Points to cast.

But even if the system leaves you cold (I’d characterize my own reaction as “mild”), this is such a great book for either adapting to your favored rules set or looking at for inspiration. The lore is compelling and there is plenty of Loremaster guidance for how to run this world, including a gazeteer packed with all kinds of information including how equipment varies between cultures, regional encounter tables, site descriptions, and calendars. The aforementioned bestiary offers “Combat Range” tables that give some very narrative combat actions for each monster, which are determined with a percentile roll- I apprechate this as a GM as it encourages me to get more cinematic and more vibrant with explaining what is actually going on in combat other than “It swings for X damage”. There are also no less than three short adventures included which I absolutely love to see, especially in a game that is presenting a new setting along with its rules. One of the biggest stumbling blocks out of the gate for such a game is having a good adventure to run with minimal work, and these scenarios give a great feel for Kalypsis and the kinds of stories you can tell there. 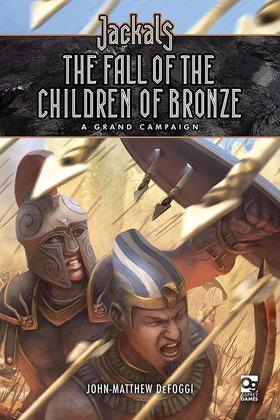 But if you are ready to dive right on in, the new Fall of the Children of Bronze grand campaign book will set you up right. It’s an ambitious book, filled (like any Osprey book) with lots of great art and good writing. I’ve of course not played through this campaign but in reading through it and visualizing how I’d run it, what I’d want to change, and what I’d emphasize throughout it, I’ve been quite impressed with how the book presents such a sweeping storyline that occurs over several years with multiple plot threads, tons of NPCs, factions, and shifting themes.

I especially like how each year, which are divided up into three acts, presents its major themes (and I do mean themes in the literary sense) and conflicts right up front. For example, in the Year of Fallen Seeds, communal needs and discovery of ancient threats are the key motivators. Current events are presented as well as NPCs of significance. Hooks and leads are given where needed as well as the usual rumors occasional read-aloud bits. Encounter locations specifically describe sights, smells and sounds, which I think is great- many GMs will always try to touch on these sensory elements, but having a prompt there that isn’t buried in text is very helpful.

Given that it is a grand campaign, I also like to see how each segment has its own hooks to provide that sometimes elusive connective tissue between what players actually did and what is at least on the rough schedule to come next. The format, as a whole, is much more table-usable and GM-friendly than the campaign books published by the Leading Brand and many indie publishers, but this is some dense material. The three-act structure suggests some logical ways to compartmentalize the narrative with session planning, and in reading through it I didn’t feel like I necessarily had to know on page 65 what was going on with page 165. This is a sharp contrast to some other campaign books I’ve read where it feels scattershot and dependent on a GM really having a handle on the entire text.

It may not be the massive epic that is Enemy Within or Masks of Nyarlathotep, but it is a more manageable campaign that explores themes and concepts in a scope that can only be described as aspirational. This is the kind of game that GMs like me always want to run- something where a committed group gets stuck in for a year or two or three and completely invested in the setting, lore, and narratives that develop. But the reality is that real, adult life often means that for most groups the Mork Borg one shot, the DCC Level 0 funnel, or the ongoing regular 5E game gets the plays while a book like Fall of the Children of Bronze all too often winds up being run in daydreams rather than on tables.

I do not think that is necessarily a bad thing- this is still a fascinating and compelling piece of TTRPG writing that I’m inspired by even if I never run a party through the Year of Golden Grain and witness the rise of a new Luathi Kingdom, the players’ Jackals changing the face of the Zaharets and participating in major battles that determine the course of the future for this world. But god knows we’ve all gotten more adept with Roll20 and other online gaming resources so maybe a grand campaign like this is more in reach now than it was even just two years ago, let alone ten or twenty years ago.

Brewmiester replied the topic: #324434 05 Jul 2021 11:14
I think this might be a pretty easy sell with some of the players around here. Like Andi I've got quite the backlog but I'm looking forward to getting my hands on this. Sounds like a less background intensive Runequest.
Read More...