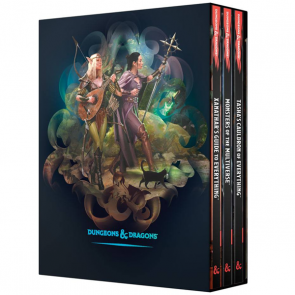 If you’ve dipped into Dungeon & Dragons any deeper than the starter set, chances are you’ve heard about Tasha’s Cauldron of Everything and Xanathar's Guide to Everything. These two books are extensions of the core rules, with material for both players and dungeon masters. Now you can pick both up in a slipcase with a third volume, Monsters of the Multiverse, that isn’t out by itself until May 2022, with the whole collection rejoicing under the title of the Dungeons & Dragons Rules Expansion Gift Set.

Of course, you may already own one or both of the Everything books, in which case this boxed set is of dubious value, especially considering it costs more than the retail of the individual volumes. These editions have foiled red on the covers, a slight difference which may appeal to collectors but equally might annoy readers who like a uniform array of spines on their shelf. The set also includes a dungeon master’s screen with nicer art and slightly more useful information than the older iterations.

The oldest book in the collection, Tasha’s Cauldron of Everything, is focused on the player experience with a new class, the Artificer, and lots of new subclass options for all the existing classes. There’s some great stuff here, allowing players to tailor their characters much more to their liking, although one or two feel a tad overpowered. Perhaps best of all the Ranger subclasses bring the Beastmaster up to speed as a playable option.

While players are going to love this, alongside the new spells and feats, there’s an argument to be made that all these options serve to make classes less distinct. Maybe that’s fine. But when you can now play a Bladesinger, a Wizard that wants to be a Fighter, while the original Player’s Handbook contains the Eldritch Knight, a Fighter that wants to be a Wizard, there’s a sense things have come a bit too circular.

A more problematic issue with the book is that the majority of the remaining contents feel like information and advice you can pick up for free on the internet. Does a new dungeon master really need official advice on session zero now that it’s become a common concept? Do groups really need official rules on decoupling stat bonuses from race to move away from stereotypes? Is there really much value in presenting some pre-written puzzles that, by definition, can only be used once, while options on the web abound?

Among the last few pages, there’s some better stuff. Rulings and ideas for group patrons are a neat way of helping bind an adventuring group together and give them motivation. Whether we need the concept of a sidekick as distinct from a henchman or standard NPC is questionable, but there’s still some good material in this section whatever you want to call them. And who isn’t going to love a few more magic items, hazards, and fleshing out the concept of parlaying with monsters.

The second volume, Xanthar’s Guide to Everything, feels rather more essential. This also has more subclasses for players to engage with and again, it’s good material, although smaller in scope than its predecessor. However, some of the subclasses are big, distinct archetypes to enjoy: Samurai, Scout and Kensai to highlight just a few. There’s also some new material to help expand your character’s backstory. Again, this feels like putting rules around something most groups do quite well freeform, but since the guidelines in the core rules on this are pretty basic, it’s a nice thing to have.

It’s the section for the dungeon master that really stands out though, especially if you’re into designing your own homebrew rather than relying on published material. The first few headers put some structure on common rules queries like sleeping and the process of casting spells. But the real value is in the following sections. They start with a trove of random encounter tables for all sorts of environments, which are very helpful for DM’s caught on the hop or for ideas to flesh out a planned adventure. The same goes for the next segment on traps, a long-time source of fascination and bane of adventurers. Then there are some rules for downtime between adventures, another blank spot in the original books, followed by some new magic items to enjoy.

Monsters of the Multiverse rounds out the collection, and it’s an odd beast. There’s very little new in the book: rather it’s a collection and refinement of monsters that have appears across a wide range of adventures and supplements. There is certainly utility in having them all in one place, and only a completist will currently have access to all these creatures. For most players, there’ll be a significant amount of material they’ve not seen before. Either way, the stat blocks have been cleaned up for ease of reference. A particular improvement is the move away from spellcasting monsters having spell slots to 1/day type abilities. Less flexible, perhaps, but far easier to use in the heat on an encounter.

Alongside the monsters, the book also collects rules for over thirty playable races. This won’t be of interest to old-school players but it is a godsend for those who enjoy their Dungeons & Dragons as fantastic as possible. Some, like Orcs, Sea Elves and Lizardfolk, you might expect. But the range then swerves into the tortoise-like Tortle, various Fae folk and even the Gith cultures of the Astral plane and the abominable snake-mutants the Yuan-Ti. If you feel like delving into this resource it can certainly bring a lot of interesting colour and possibilities to the interactions between your adventuring party.

While there’s no denying the utility of these three books for your Dungeons & Dragons games, there’s a question mark over whether they’re truly essential. My group has been playing happily since the advent of fifth edition without them, but we like to keep things simple and use pre-published adventures. If you’re into variety or optimising or doing a lot of homebrew there’s a lot more utility here. Whether you need all three in the one box of the Dungeons & Dragons Rules Expansion Gift Set, and at a price premium at that, is a moot point, which will depend entirely on your collection. As someone who was a stranger to the set until now, it seems a convenient and attractive way to expand your games.