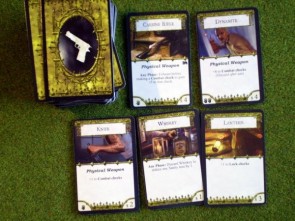 I am one of those individuals that loves the potential for a good story from my games. Consequently, I am drawn to those games, such as Arkham Horror, that just exude theme. Unfortunately, a good story can become derailed at the beginning due to some minor inconsistency - some feature which manages to pull one out of one's suspension of disbelief. Speaking personally, this occurs on a fairly regular basis during the set-up phase of Arkham Horror when the random items are assigned. Many are the times that I have wondered why my Magician character would start the game with a Time Bomb, rather than some Dusty Manucripts. And why on earth would a doctor have a Tommy Gun and a supply of Dynamite laying around his office?

In an attempt to correct this problem, I have created the following tables for each Arkham Horror character. For each random, common item a player is to begin the game with, roll two six-sided dice and consult the appropriate table instead of drawing one from the deck. That item should then be pulled from the common items deck and be added to that player's inventory. If the same item is rolled twice, the player should reroll until he or she gets a different common item. In keeping with the special abilities of the characters, the Drifter and the Salesman should roll twice for each item and keep the choose the one that they prefer.   Because the nature of the tables is to skew the characters away from starting with the more "unusual" common items, it might be advisable for each to player start the game with an additional common item and consequently an additional roll on the appropriate table. Hopefully, this would make up for some of the loss of "firepower" that your fellow players might righfully mourn. Also, I feel that even those characters that start with no commons should get one opportunity for an item (why not share the fun?), so I have contructed charts for those characters too.   Those investigators are marked with an asterisk.

I hereby dedicate this varient to those of you who are actually disappointed when your Muscian starts the game with the Flamethrower.

Editor's Note: Below is an example of the tables. You can download a pdf of the tables for all the characters at the bottom of this article. You must be logged in to download the file.

The King is Yellow is a member of There Will Be Games.