Why can't WE play that? 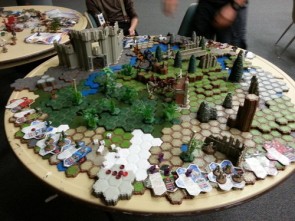 That was the response my buddy Steve blurted out when I told him what we had played when he was away at Gencon.  He and Chris, the regular host of my Tuesday night gaming session had traveled to Indianapolis and in their absence I had thrown out the question to the usual suspects – “anyone want to head down to my place instead?”  My wife and daughter were due to be out of town, a nice convergence of events.  When only Kyle (Keeper of All Games Ancient) responded I opened discussion on two-player games we could potentially play.  He owns War of the Ring (the first one), he owns Starship Troopers (the first one), and I own about a dozen wargames big and small that never hit the table because our group’s dynamic just doesn’t allow for it to happen.  But when I told him that my 13-year-old son might want to sit in on some of it he responded, “my son was interested in throwing down the hammer with a Heroscape battle if you're interested and can set up a board by then.”  All three of my boys were suddenly in the mix, and a map big enough to cover six place-settings was laid down on the dining room table in short order.  2400 points of Heroscape monsters would spend a short moment staring each other down, then would rush across the field of tiles just purchased at a local flea market, heads down and weapons flailing.

You can decide for yourself whether Heroscape is your game.  A lot of you are interested in something with more meaningful decisions, or more self-agency, or more whatever-the-latest-term-is in it, and that’s fine.  But the thing about Heroscape, and the thing about playing it with kids at the table, is that it gives you permission to play the game like you stole it.  You can scream, you can get mad at your dice and fire them, you can storm away from the board as if your kid has cut your throat when all he did was cut your Ice Elemental.  You can threaten to write him out of the will.  You can explain you’ve paid for every meal he’s ever eaten.  You can ground him for life.  But it’s all meaningless because that’s Heroscape’s essence.  The nature of the game gives you permission to just let go, and when you do the game gets even better.  Rather than the crazy spiraling down the fun it spirals it up, increasing with the volume.  My buddy Steve loves this kind of thing, but Heroscape doesn’t get played in our group.  It’s not proper.  So he missed it. 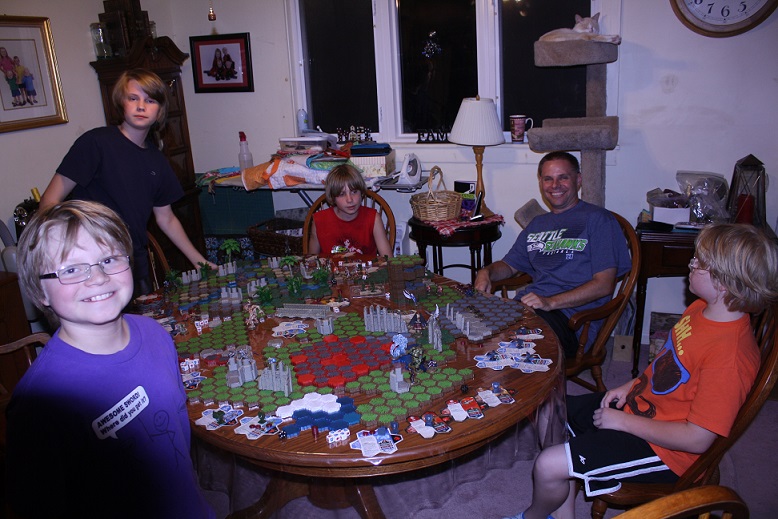 And this is the part where I explain how I piss people off.  I have a thread that’s been running on BGG since 2007 called “What’s hot with the kids at YOUR house?”  It has about 500 entries in it and it’s really a testament to the large number of truly childish games (in a good way) that are available if you beat the bushes a bit.  Parents of young kids mention Don’t Wake Daddy, or Go Away Monster, but often other games that I haven’t heard of from Haba or other foreign publishers not available in the U.S.  A lot of these games aren’t merely good for kids, they’re good for us big people that occasionally need to unwind, and they do that if we come to them with the right attitude and perhaps a little claret.  Time spent with our kids is healing as well.  Now I understand most of you want a brain burners, but leaving the upper tier of these crazy kid games behind leaves a hole in your collection.  Larger than life games are rewarding, and that's why Steve was disappointed he had missed out on what may have been my single best gaming session of the year.

So in a thread about gaming with kids I’ll occasionally see someone talking about big euros, and I'll make the point, “they’re only young for a short time, seriously, consider playing kid games with them.”  Five-year-old kids will play Agricola, but they won’t dig Agricola.  They’re playing it because Dad likes it and they want to celebrate his hobby.  They want to spend the time with something that Dad values, they want Dad to be happy when he sits down to the table with them.  This is what kids do.  They want to please you, and they look to you for approval.  Instead of pushing them up the ladder early climb down it.  Bring out Max or Epic Duels or Sleeping Queens and play like a child.  Your kid is giving you the benefit of considering what you want to play, be the bigger person and extend the same courtesy in return.

That’s where the pissed-off part comes in.  “If my kid has fun playing my games why should I play his?”  I explain that your kid is likely doing what it takes to make you happy and that just pisses them off more.  People get angry when you tell them they're not raising their children right, and even angrier when you tell them they can't have their Agricola.  Well I'll tell you what, so be it.  I've come to the conclusion I don't have to convince anyone, I only need to get them to consider the concept.  That alone is likely to bend behavior a bit and if that's all I get out of it I'll consider it a win.  And BGG is a big place, so you're bound to offend someone.

But let’s set that aside.  What I find most curious is that the responders often miss the second half of what I said.  This isn’t about sitting down to a game you hate and enduring the pain of playing it with your kid.  I don’t like playing Candyland any more than the rest of you do.  But the alternative isn't limited to breaking out Eclipse with a four-year-old.  This is about finding true common ground, creating it when you have to.  There’s room to be gracious and greedy at the same time as long as you’re willing to do what kids do on a moment’s notice – volunteer to be an idiot.  That's the secret – you need to give yourself permission to stop acting like an adult while standing in front of a wall of games you paid $2500 for.  It's tough!  You need to set your ego aside.  Your copy of Twilight Struggle doesn’t care if you’re flipping rings onto a flamingo’s neck, or picking up magnetic truffles with a rubber pig nose, or fighting over cookie ingredients with suction cup spoons.  Twilight Struggle is perfectly happy sitting this session out.  It’s also very patient.  It knows that that kid in the batman pajamas is going to pull it down off the shelf in about ten years, learn it on his own and then ask you to play.

Now, I can't take credit for this.  It isn’t some profound new concept.  "Joel, sometimes you’ve just got to say, ‘what the fuck.’  ‘What the fuck’ gives you freedom.”  That's a line from Risky Business and though I can't recommend you starting a brothel in your house I can recommend you applying the principle with kid games that let you reach for the more visceral side of gaming.  The moment you decide that smashing play-doh cars with a big plastic hulk fist won't damage your gamer cred something happens – you discover that . . . wow . . . it’s actually kind of fun and de-stressing to smash things.  In time you picture your boss sitting in that little purple car and move the board to the floor so you can get more leverage on him.  The game becomes cathartic.  And when you get your voice up and start pumping your arms like the Hulk with your kids you start realizing that Lords of Waterdeep though quite cranial has its shortcomings.  That’s the choice – place workers with your five year old or shout “Hulk Angry!” with them.

So that’s what I say to people.  Let your kids be kids, because quite frankly playing stupid games with them often is more rewarding than you think.  They can teach you the right way to play their games if you let them.

I have to confess – I still make the mistake.  All the best kid games I own were purchased by my wife (including Heroscape) and if you reread the first paragraph above you'll see that two weeks ago I was sending messages to Kyle trying to figure out what “big person” game we should sit down with.  When I read his response I was almost embarrassed, “My son was interested in throwing down the hammer with a Heroscape battle.”  Two Dads, four sons, no girls around.  What the hell was I thinking?  Of course we should be playing a kids game and acting like idiots, even more so since our gaming group never does.  This was a window of opportunity not to be overlooked.

I’m going to add an epilogue to this article – to some extent I think very young children (ages 1 to 4 more or less) need to play the classic games as they play a role in our culture.  I played Candyland with my kids and Chutes and Ladders and most of the other pulp games available for under $10.  These are not very engaging games.  But sitting on the Turtle Whirl at Dutch Wonderland isn’t either, and I did that too.  One of the jobs of a parent is to provide a broad background of experiences to our kids, especially ones they will reference later in life.  Like it or not Chutes and Candyland (and of course Monopoly at a later age) are heavily referenced in our culture.  Playing them a couple of times each broadens our kid’s horizons; sometimes you play strictly to teach.  If you’re uncomfortable with that concept you likely should look into hiring a nanny, as there’s plenty of tedious work involved in raising a child.  But the number of times you need to sit down with those games is counted on one hand, especially if Incredible Hulk Smash is on the shelf beside them.  Again, your kid will know what to do.