The Beauty of Favored Ground. 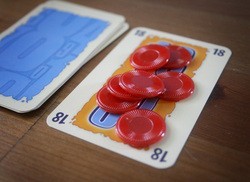 Game Name
No Thanks
There Will Be Games

There wasn’t much time left this past week so we sat down to a game of No Thanks.  This is a quick game by any standard (even by the standard of the two prior games of Biblios, a quick game all its own.)  But in spite of that No Thanks presents a bit of magic in the play that I usually just refer to as “favored ground”.  As far as I’m concerned favored ground is a seriously cool thing to have in a game, but it will take a bit of explaining to describe how No Thanks manages to have it in spite of not having a map, or even a board for that matter.

The concept is pretty doggone simple in a Wargames or Dudes games where a map is in play – some positions on the map are just plain better than others, because you can shoot farther from them, defend them more easily, or may just be worth an extra point or two at the end of the game.  But favored they are one way or another, and often they’re favored to everyone – each player wants to hold that space.  But that doesn’t have to be the case.  Sometimes a position favors you more than others and that can make those positions intrinsically more valuable to your opponents as well, if only to take their advantage away from you or force you to pay dearly for them.  This “he wants it so I should take it” aspect becomes a mini-game within the bigger one, and that expands the fun for me personally.  The board comes alive, rich with perceived hot spots or even a three dimensional high spot in your mind.  Your gameplay needs to take this terrain into account, and each turn presents you with a different scenario to work from, since different locations have different levels of strategic value depending on other factors in the play.

So how does a dead-simple card game like No Thanks with no board and no player pieces manage to have favored ground?  It has it through the addition of one simple rule on scoring.  That one rule completely changes the way the game is played.

Here are the rules of No Thanks, so simple that I can nearly quote them verbatim in this paragraph.  Your goal is to score as few points as possible.  A card is turned up in the middle of the table with a number on it.  If you put one of your chips on it, you don’t have to take it.  If you don’t, it’s yours.  The cards run unique values from 1 to 35, a few are randomly taken out of the deck to keep you guessing.  Needless to say, when you run out of chips you have to take the card (a bad thing), but when you take a card you get whatever chips have been placed on it (a good thing).  All cards are reverse-purchased this way and you add up the numbers on the card you’ve taken at the end of the game to determine your score.

Those rules would make a solid game all on their own, but I left one out, the one that puts a whole lot more intrigue into the nature of No Thanks.  The final rule is this – if you have two or more cards that are consecutive, you only score the lowest one.  So if you have the 21 card and the 23 card, the 22 card suddenly becomes much more valuable to you than to anyone else.  It adjusts your current score by 23 points downward, a very nice change indeed.

But that’s not where the intrigue ends, because that 22 card is the kiss of death to the other players at the table.  They know they’ll never combine it with a consecutive card because they’re already out, so they really don’t want it.  And since you know that they don’t want it . . . well . . . maybe . . . you don’t want it on the first pass either!  You can grab it right away and that’s the safe thing to do, but with two or more opponents at the table that card becomes a piece of favored ground for you and one big piece of ugly for them, one that they would much prefer somebody else take home.  So you can press your luck a bit, putting one chip on it on the first pass, offering other players the low low price of just one chip to make that card someone else’s problem.  They’re aware you’re probably going to take it, but the question is at what price.  Since the card is bad news for them you may as well push your luck a bit to be in a better position for the next card to come along.  That 22 card is your favored ground, a place in the spectrum of cards that you can use to your advantage that your opponents cannot.  Of course what goes around comes around and a strategy of extorting your fellow players for chips could result in someone jumping on the grenade just to screw you for good reason or none at all.  That’s the nature of things.  It’s also the nature of favored ground, where battles often get out of hand.

This one twist in the rules gives each card a second dimension beyond its face value.  Since the card comes up at a different time in each game with a different spread of cards already on the table, its value is not static.  Certain cards actually become hotter to you personally, take on greater or lesser magnitude than their number lets on.  And these two latest paragraphs speak to the exact factors of Favored Ground that I mentioned at the beginning of this article.  There may not have been a map on the table between us, but there certainly were places better suited to my position in the game.

So as I sat there with two measly chips in my hand, a 23 and a 21 card on the table in front of me and a 22 in the middle, I dropped a chip on, using this brief moment in the game to refill my coffers.  My buddy Stephen openly said, “I think we’re being abused here” and he was right.  That’s what gaming buddies are for.  He placed a chip on the card as did Eric right after him, and my second chip down was a swing for the fence.  No sense not grinding out two more if I could.

san il defanso replied the topic: #213676 29 Oct 2015 14:09
One game that does this really well is Ra. All of the players start roughly equal, but the auctions put people in different situations almost immediately. I love those moments when you know you can bid 3 for a big lot, because you're the only one who won't be losing points because of the disaster tiles.

This is a great article.

San Il Defanso wrote: One game that does this really well is Ra. All of the players start roughly equal, but the auctions put people in different situations almost immediately. I love those moments when you know you can bid 3 for a big lot, because you're the only one who won't be losing points because of the disaster tiles.

This is a great article.

Funny you should mention Ra, as I just played Tuesday night and had a similar moment come up. One tile on the track, it was worth five points to me and none to anyone else. I called the auction immediately and so would get last bid. The other four players looked at each other trying to figure out who would squander a bid in order to keep me from getting it, and I had a broad array of bids to choose from. One of them could bid me up at the risk of me letting them have a single tile at a high price, or I could grab it for a bid of 3. A fair amount of debate ensued, deciding whether to prevent me from having it, push me a little in hopes of making me pay, or just let me have a valuable single tile on the cheap.

In this particular case their downside was more about opportunity loss, but the concept stands. This kind of game-within-the-game makes plays crunchier, and in Ra, Knizia showed that he could do it.

san il defanso replied the topic: #213684 29 Oct 2015 14:57
I've often thought about this exact principle in relation to Ra, but I've never had a word for it until now. Always nice when an article is able to articulate something like that.

You see some of this in El Grande too. There are lots of times when you think long and hard about taking an iffy strategy card just so someone else won't get it.