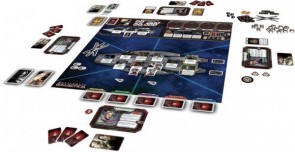 As requested in the "RIP BSG?" thread, here are our group's mini-campaign rules for BSG.

Twice a year, on Colonial Day and Caprica day, we have a group get together and play through a four game BSG mini campaign.  We've been doing this for years now and the rules are on their 4th major revision, so things work extremely well at this point.

I can't take any credit for these rules other than some throwing around of ideas and all the playtesting we've done; all the really hard work was done by two other guys that were cool enough to give me permission to share.

The rules are attached to this article, but here's some of the details:

The main goal of the mini campaign is to reproduce some of the feeling of the show without sacrificing gameplay.  We've never run into a situation where we've started running out of components, in fact we often play a 5th game with the leftovers if time permits.  I could prattle on but I won't, so download the instructions and enjoy!