Once you have scarpered from the horrors, or not, of the Museum, book in hand, or not, you head to the town of Dunwich. How do you get there? By train of course! Nothing has ever gone wrong on a train. Nope. Never ever.

Part way through your journey the train is jostled and you jump to your feet to investigate. Looking out the window and towards the back of the train you see a vortex has appeared in the sky and the train is being sucked in. Time to run!

All aboard the Essex County Express!

Setting up the train is a joy because it is so different to the scenarios you have seen before, because you are on a Train. Choo choo!

Picking one of 3 engine cars and 6 of 8 train cars gives you a train to pelt along with your investigators stuck in the Kaboose and the aim being to get to the Engine car at the other end. Seems straightforward enough, but in order to get to the next train car you need to gather all the clues on the previous.

The agenda deck for this one ticks down very quickly and every time you turn an agenda 1 or 2 of the rearmost cars are going to get sucked up into the ever increasing void, along with anyone on board! This is a really beautiful moment of description leading to mechanics, as the front of the Act tells you what is about to happen and then hits you with it. Lovely piece of foreshadowing.

On top of this ticking clock many of the train cars will take a toll on the investigators when entering it, requiring the discarding of skill icons to enter or hitting you for damage. Some of the other train cars give you the opportunity to ‘Steal some luggage’, grab some resources or reveal one of the lurking monstrosities that are threatening your train ride. An interesting aside here is that if you do ‘Steal the Luggage’ there is no mention of it in the Resolution step of the scenario. The designers are playing with your expectations here which I really like, foreshadowing something that never comes to pass, and keeping you guessing what they may do in future encounters.

The Act deck is a fairly straightforward affair with only 2 cards, the first flipping on entering the engine car. When you do enter the engine car you find yourself leaping onto it or enduring the attack of a monster to do so, a nice little narrative choice which builds a great picture of what you are up to. The engine car itself provides clues and once they are all gone you can get that baby running. Full steam ahead!

The encounter deck for this scenario gives you some cultists to deal with along with the familiar Ancient Evils set and some horror sets that will slow you down. The set specific to this one is interesting in that it contains quite a few of these fine gentlemen: 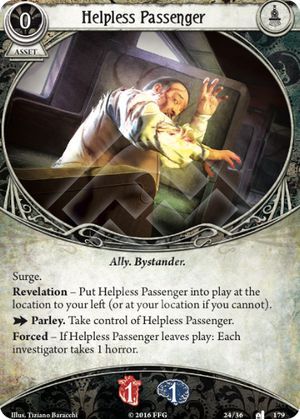 These passengers always turn up behind you or in the same space as you if you are right at the back of the train, and you can see that they will cause a problem. Yeah you can bring them with for the cost of an action, but if they appear behind you in a scenario that strongly incentivises racing forwards that gets problematic. Do you go back and get them, or do you let them get sucked into the beyond and take the damage, the choice, mechanically and morally, is up to you.

There are couple of big victory point monsters in the deck, which you might want to hang around and take down to get yourself some delicious xp. The Engine car and one of the train cars will also provide a little xp, but as is the trend for Dunwich you aren’t getting quite as much xp as you did for the Core Set scenarios.

The rest of the encounter deck is nothing particularly special, mostly focused on slowing down your progress as you rattle through the train, tripping you up as you sprint for the Engine Car.

Depending on the Investigators you choose and how the encounter deck spits out problems this scenario can feel very tight or a bit of a cakewalk. However, unlike the Miskatonic University the threat is always present and not so random. If you lag behind you will disappear into the great beyond and pick up a new weakness as a permanent addition to you deck, a nice little mechanic that will be used again in future scenarios to keep the investigators on their toes. 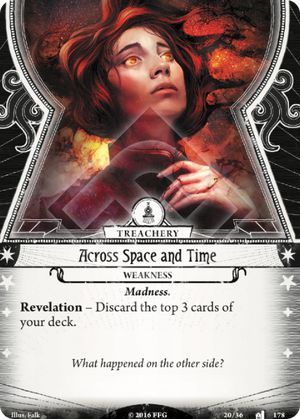 I really enjoyed Essex the first time I played through it and it has always maintained a pacey structure on subsequent playthroughs. It can feel a little flat with some of the later cards running rings round it’s problems and also the recent FAQ ruling that the wild symbols count for any symbol when discarding to enter cars has made it a bit easier to get around the train.

All the same I love that the design team are willing to replicate locations like a train and I can’t wait to see what they could do in the future with boats, hotels and who knows what else.

Discuss this article
Log in to comment
Posts in discussion: Beyond the Veil - The Arkham Horror Card Game: Essex County Express

DarthJoJo replied the topic: #300833 15 Aug 2019 22:19
Like the previous museum scenario, I can see the cracks in the design, but I still kind of love it because it doesn't feel like anything else two years later. No scenario before or since has had such a frantic pace, and the memory of flipping that first agenda for the first time and throwing out that last train car is awesome.

Of course, this cuts both ways. It was possible in a larger group to lose in the first mythos phase if the encounter draws were particularly unlucky (patched in the 'Return to The Dunwich Legacy' box), and playing this after buying the pack on release day was a mixed bag. It was a rush, but it was also a scenario that might legitimately last fewer than thirty minutes. You spent as much time building the encounter deck and breaking it down as it took to play it, and then you were waiting another four weeks for the next pack.

Good news for your interest in a hotel! A month ago Fantasy Flight announced that the next stand-alone scenario will be a murder mystery set in a hotel with ten different possible endings. There was a found-footage promo video and everything.

thegiantbrain replied the topic: #300884 17 Aug 2019 14:20
Yeah I am really looking forward to the hotel. I have a friend working on an infinite train scenario with some of the encounter cards out of Forgotten Age. The scenario will be called Snakes on a Train (boom tish).
Read More...