Beyond the Veil - Arkham Horror Card Game: Dunwich Legacy - Blood on the Altar 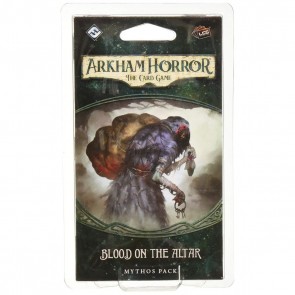 Game Name
Arkham Horror: The Card Game - Blood on the Altar
Publisher
Fantasy Flight Games
There Will Be Games

You have arrived at your destination

After the Train has left you at Dunwich station you make your way into town, to be greeted by Zebulon Whiteley and Earl Sawyer, both connected with the previous events in Dunwich that have been alluded to throughout the campaign. Offering to take you in for the night, you sleep soundly only to find the house abandoned. Fearing the worst you head into town only to discover the truth is much worse than you could have imagined!

A local town, for local monsters

Setting up the town you immediately realise that this is one of the most varied scenarios yet. Each location has two variations and you only use 5 of the 6 locations for each attempt at the scenario giving a large amount of unpredictability, and replayability, to the proceedings.

In addition, along with cards representing Zebulon Whiteley and Earl Sawyer, you add the people that have been ‘kidnapped’ previously in the campaign to form a pile of ‘potential sacrifices’. That can’t be good. I do love how even in the setup of this scenario they are foreshadowing what is to come, putting you on edge right from the off.

The main task of this scenario involves hunting down the missing people and figuring out what is going on. The setup involves mixing in a key and a chamber to 3 other encounter cards and stuffing them under the locations. When you empty a location of clues you can then take a fast action to reveal the card below, hoping to find the key that will let you access the chamber. The other 3 encounter cards will just cause you trouble. 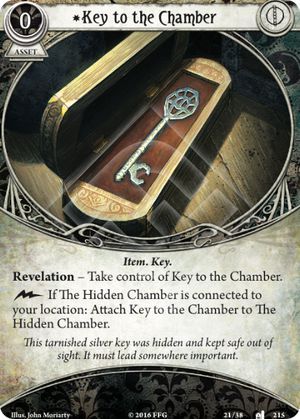 The Agenda deck has a rather evocative picture of a trussed up captive on it and a warning that the disappeared people are likely in grave danger. True enough whenever the Agenda deck advances it puts one of the ‘potential sacrifices’ under the Agenda deck. However you finish up the scenario all those people under the deck are going to have been killed by the cultists, meaning they will be removed from all future scenario, whereas all those you save can help you out in future scenarios by getting added into your deck. If you let the Agenda deck tick all the way down it’s automatic resignations for you.

The Act deck is relatively straight forward initially, Act 1 ticking over when you make your way into the hidden chamber. Act 2 is where a really interesting choice is presented to you, and first time through it is unclear which way you should go. Upon unlocking the hidden chamber you are confronted by a monstrous creature, though the monster is named, implying that they may have once been human. The chamber sucks all the clues in play onto it and presents you with a choice: find a solution by hoovering up clues, or end this monsters existence.

I really like this choice as it implies, but does not tell you, that maybe there is a way other than violence to deal with the situation in front of you. Sure you may swing one way or another mechanically but that the choice exists at all is a nice touch and adds to that flavour of your character being a living, breathing part of the world, not just a collection of cards. Of course if you do choose to hoover up clues you are going to have to be clever about it as Silas packs quite a punch and is Massive, engaging with everyone at the location.

Killing the creature gives you a fairly straightforward resolution in that you get some xp. Getting all the clues, and with a Necronomicon stolen from the Miskatonic museum, you can restore him to his human form. You still get the same XP that you would for killing him, which is a nice touch and I’m glad that the violent path is not rewarded more than an investigative one. If you don’t have the fabled tome, then you grab something from the chamber and recite it, finding that it is an incantation to banish poor Silas to the beyond. Who knows, maybe you will see him again?

The encounter deck in this scenario is thing of tense beauty mostly down to this particular card: 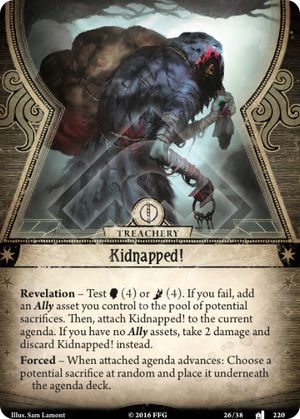 Just look at this card. Read it and soak in what this means. This card can take one of your allies and add it to the pool of potential sacrifices. Not only that but it will increase the pace of sacrifices being put under the Agenda and as we have already covered anyone under that deck at the end of the scenario is gone. Forever. Yep that’s right this card can snatch a character out of your deck and make you not able to use them again for the rest of the campaign.

I love this card. The first time I played through this with my Ashcan deck I lost my good friend Peter Sylvestre to the cultists. I was actually upset about this as he was an integral part of my setup and had proven incredibly useful. Now you may think it’s silly to get upset about that, but I loved that the scenario felt like a gut-punch. Peter was gone forever and was never coming back. I’ve heard of this card stealing Duke from you as well and people playing on without their faithful hound, seeking revenge on the cultists that killed him.

The rest of the encounter cards do things like push clues onto the board from the pool, making your eventual encounter with Silas harder, present the Servant of Many Mouths to hoover up clues quicker and also repeat Rotting Remains from a previous pack. This last one is especially interesting as I hadn’t considered that they would transpose a card from one set into another. This opens a range of possibilities for future packs and I look forward to seeing what they do with that lever. 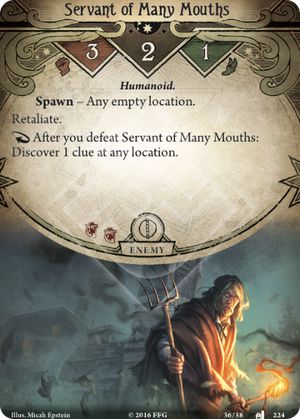 The rest of the encounter deck involves Whooperwills, the Dunwich set itself as well as Nightgaunts and the ever present Ancient Evils. The Dunwich set is worth a quick look at as it contains the excellent Sordid and Silent. This is a brilliantly flavourful card that is essentially ‘the investigators feel like they are being watched’. Subtle little mechanics like this really please me and they offset the gut punches of this scenario nicely. 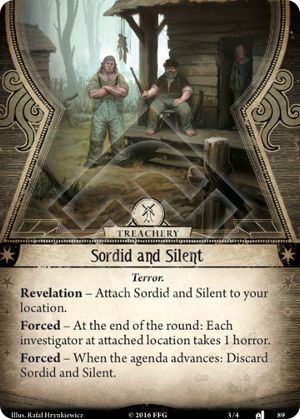 In addition to these sets the O’Bannon gang from the House Always Wins may have followed you along as well if you pissed them off, just adding to the threats this scenario has barrelling towards you. I do think the O’Bannon gang waters things down slightly as the threat of the scenario should really come from Kidnapped. Putting more encounter cards in the deck thins the possibility of it happening, but I suppose not every deck is going to care about such things.

Blood on your hands

Blood on the Altar is a fantastic scenario and after the slight downturn in quality after the Dunwich core stories, really shows a flair for the dramatic and unexpected. Everytime I play thought this scenario there is an air of trepidation. Do you play allies in the hope of being able to pass the Kidnap tests, how quickly can you move to save the potential sacrifices, can you save everyone? The answer is usually no.

Discuss this article
Log in to comment
Posts in discussion: Beyond the Veil - The Arkham Horror Card Game: Blood on the Altar

DarthJoJo replied the topic: #301233 29 Aug 2019 23:17
I'm with you. I think Kidnapped! is my favorite encounter card in the game. In game, it's rough. Allies are among the most powerful assets in the game often providing potent abilities, stat pumps and damage and horror soak and rarely come cheap. The tempo hit is real if you fail this test.

In campaign, it's terrifying. Losing a Dayana Esperence or Brother Xavier that you invested experience in or a Lady Esprit or Abbess Allegria that you earned through a side scenario makes your fight with the Bishop family personal.

Otherwise, it's not one of my favorite scenarios. Just feels like it runs a little longer than it should.

thegiantbrain replied the topic: #301277 31 Aug 2019 13:34
I'd agree on it running a little longer than it should. I think the emotional impact of that scenario will always stay with me though. One of my favourite gaming memories.
Read More...