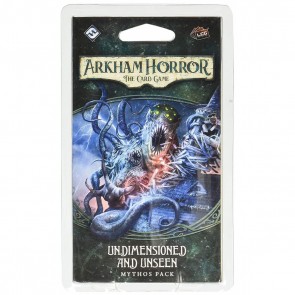 Something wicked this way comes

After the emotional rollercoaster of Blood on the Altar you search the village of Dunwich seeking to understand what happened to Seth and the reason behind the kidnappings. As you ask around a commotion breaks out in the town and the village gathers together in a panic telling you that ‘they are back’, that the creatures from ‘The Dunwich Horror’ have returned to reek havoc upon the town.

This is an interesting scenario in it’s setup as you will quickly notice that it is being used to balance the progress of the investigators up until this point. Looking at those ‘Sacrificed to Yog-Sothoth’ in your campaign guide, the less you have on there the more Broods you are going to have to deal with: 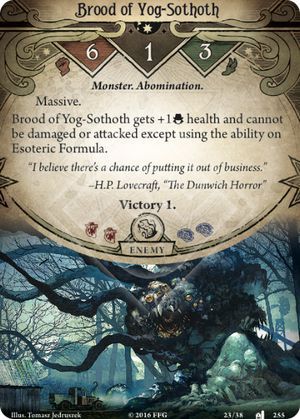 What a lovely looking chap

Whilst I like the idea of a scenario that acts as a balancing point in the campaign this does feel a little heavy handed, especially considering that you can’t fight these particular monsters in the normal way.

That formula that is mentioned is set aside out of play, a vital ingredient that is going to help you deal with these abominations. If you were ‘successful’ in the previous mission you will also have a handy powder to help you out that the setup allows you to go and fetch. 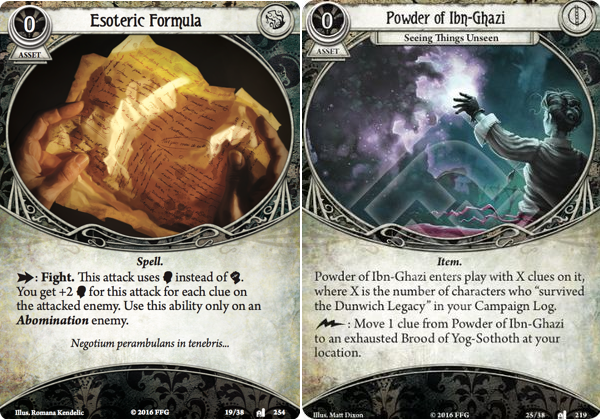 Starting to get the picture? Once you have all these bits and pieces together your journey can begin.  Oh, one more thing. This scenario gives you another Madness, Injury or Pact weakness, just to make things harder for the rest of the campaign. Goddamn it!

The remainder of the setup involves choosing 1 of each of the locations, meaning there is a good amount of variation in this episode for repeated playthroughs.

Beginning in Dunwich village you start to hunt down the mysterious creatures that have attacked this place, some of whom may already be in play depending on how well you have done so far.

The Act and Agenda deck guide your initial investigations:

The Agenda deck controls the monsters, keep in mind it will trigger right from turn 1 no matter the amount of doom on it. The Act guides you towards the Whateley manor where hopefully some form of solution awaits you.

Once you have searched Whateley Manor you all get an Esoteric Formula to use, and the real fight can begin. The final act, for there are only two in this scenario, allows you to advance it only when there are no broods in play or set aside. Simple no?

As the broods move around it really does feel like you are hunting down an ever increasing threat, the encounter deck occasionally boosting the abilities of the brood. You need to get clues on them to hit them, which you will find a variety of methods to do, but the Will attack on Esoteric formula means it’s likely that the physically weaker characters like Rex are going to have to get close to these beasts. It’s a delicate balancing act taking them down and if you want to trigger the second act card, a matter of timing as well.

Many of the locations will allow you to change the behaviour of the Broods, move clues onto them or generally give you some form of advantage. Of course since the layout is random each time it may be that you don’t quite have the ideal setup for your characters, but that is sort of the point. Arkham is a game of making the best of what you have, hoping to survive with your mind and body intact. 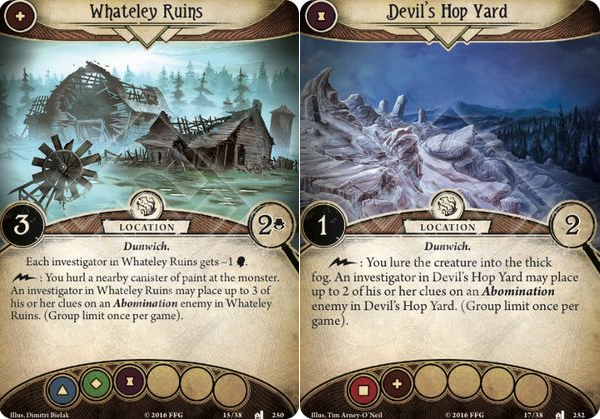 Maybe you’ll take them all down, but more than likely you will decide to get out of dodge and hide from the creatures, resigning, once you have taken down as many as you can. It’s a tough scenario and interesting one to choose as the balancing point of the campaign.

The encounters deck is primarily taken up with two things, slowing you down with things like Striking Fear set and the Whippoorwhils and altering the difficulty of the monsters. The entire of the Undimensioned and Unseen set, affect the movement and stats of the broods, making them unpredictable which I really like. They feel like rampaging abominations, appearing out of nowhere,reeking destruction and then disappearing once more.

The nature of this set means that there is effectively a second timer on you apart from the one set by the Agenda deck. The longer you take, the bigger and more threatening the Broods in play are going to get, but you need time to get the clues on them to take them down. Balancing these desires is the crux of the scenario.

This is a fairly straightforward monster hunt scenario, given some extra tension and twists by the requirement of placing clues on the monsters. I really like this scenario, but it feels pretty brutal anytime I tackle it. One thing I would love to try is going into this scenario with cards like Close Call, card that can be used to manage non-elite enemies. The Broods are curiously non-elite, so this seems like it could be really useful in this scenario. 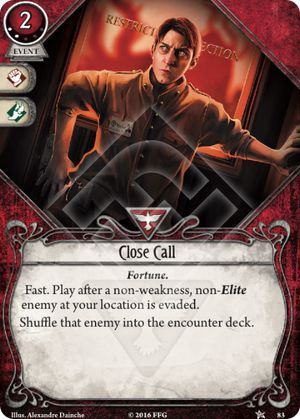 After tackling the Broods you retire to Zebulon’s house and figure out what to do next in Where Doom Awaits.

Discuss this article
Log in to comment
Posts in discussion: Beyond the Veil - The Arkham Horror Card Game: Undimensioned and Unseen

DarthJoJo replied the topic: #301231 29 Aug 2019 23:08
Though this scenario doesn't enjoy the greatest reputation in the wider community, I still enjoy it. It falls into that class of scenarios where complete success isn't really expected. You're just trying to do the best you can in finding cultists, interviewing party guests or, in this case, knocking around some monsters. It's okay to run after only collecting two monster scalps. It's not a defeat. I think a lot of the negative feelings toward this one come from rough first plays where no one brought a Mystic or Seeker with Higher Education that make hitting the Broods a lot easier.

You're right, too. There are more than a few weird interactions in that the Broods aren't Elite. The most powerful, perhaps, is Mind Wipe. Generally a fairly weak, niche Mystic upgrade that blanks the text box of weaker non-Elite enemies for a turn, here Mind Wipe drops the Broods to one health and allows them to be damaged without resorting to the Esoteric Formula, thus allowing all the investigators' usual tricks to work.

thegiantbrain replied the topic: #301271 31 Aug 2019 03:23
Yeah there are definitely some funky interactions with some of the lesser used cards, and that is even more the case now the card pool has increased. I believe the broods are a bit tougher in the Return to.. box but I haven't had a chance to play through that as yet.

DarthJoJo replied the topic: #301275 31 Aug 2019 09:18
They’re probably a bit tougher in Return, but the big draw is their variability. Different abilities and stats on each one, so you can’t plan for them as well. Also, there’s a new encounter card that gives a Brood Elite, so there’s that.
Read More...