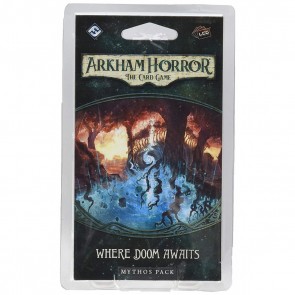 After the events of Undimensioned and Unseen, you awaken to see the town quiet and a faint glow emanating from a nearby location, Sentinel Hill. The tales of old speak to strange events and sacred rites occurring in that place, so you gather your wits and head in that direction. What ensues is a desperate race to the top to stop a ritual designed to bring around the end of the world.

Thankfully you may not be alone in your efforts depending on how things went way back at the start of the campaign in the Clover Club. If ‘Naomi has the investigator’s back’ then you gain a clue from the mob tailing these cultists to this location. Additionally their are three Act 2 cards and the one you use will depend on the previous events with Silas Bishop and the Necronomicon, a nice little variation that comes through mostly in the flavour of those act cards.

Now on to the climb.

You set out the 3 core locations for this game right from the start and you stare up at the peak wondering how on earth you will get there.

The Agenda deck is really thin this time round with only two cards and a high doom threshold on each. The Act deck is your guide to the top of the mountain, flipping the Ascending Path and allowing entrance to it after Act 1. The Peak itself requires a bunch of clues to enter and it is this search for the correct way up that drives the entire scenario.

Starting at the base of the hill you can find one of the Diverging Paths, you set aside 3 out of 4 of them at the start of the game, and then can enter those paths to find the clues you need. The paths all have a Forced effect that will do things like mess with the number of actions you have left, discard cards or put doom on the path you discover. 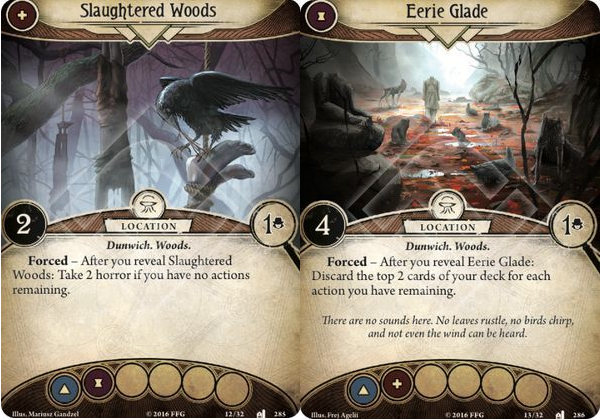 Once you have enough clues you get to enter Ascending Peak and set about finding your way through a new set of Altered Paths and the gathering of clues from these locations. Finding you way through sees you cresting the peak of Sentinel Hill to confront the cultists atop the mountain. Gathering information at the peak allows you to close the gate that the cultists are opening allowing an ancient evil free to rule the world. If you fail your campaign is going to stop here!

Designing this kind of do or die scenario is a pretty bold move from the team and I can see it putting some people off. I for one really liked how this plays out: they telegraph that you need to stop the ritual, on Act 1, and then follow through on the threat of it.

Throughout the Dunwich campaign it has felt a little like the designers setting out their stall for what is to come later in Path to Carcosa and beyond. As well as providing individual stories for us to play through they are teaching us how far, or not they are willing to go. Here they are teaching us that your campaign may not last all 8 scenarios if you don’t do well enough, an important lesson for sure.

In ‘Blood on the Altar‘ we were shown that your cards can be ripped from your deck, and in ‘Undimensioned and Unseen‘ that it is not always the fighters that will be able to defeat the monsters that lie within. I love these subtle mechanical lessons, and it shows a continuing desire from the team to surprise and delight, or should that be horrify, it’s players.

The encounter set for this particular scenario is a pretty varied affair with probably the most annoying card being this one: 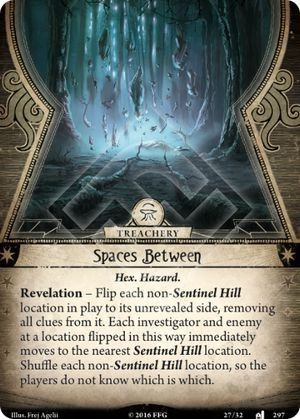 This card can really hamper your investigation at the wrong moment, resetting the paths you have discovered, making the clues disappear and chucking you to the nearest Sentinel Hill location, i.e. back down the path.

The rest of the encounter set for Where Doom Awaits has a couple of cards that make the paths a more treacherous place to be alongside two rather flavourful monsters. These are a victory point holding Shoggoth who can just outright kill, that means they are out of this campaign, and the excellently flavourful ‘Devotee of the Key’, who I love for his march to the top of the peak! 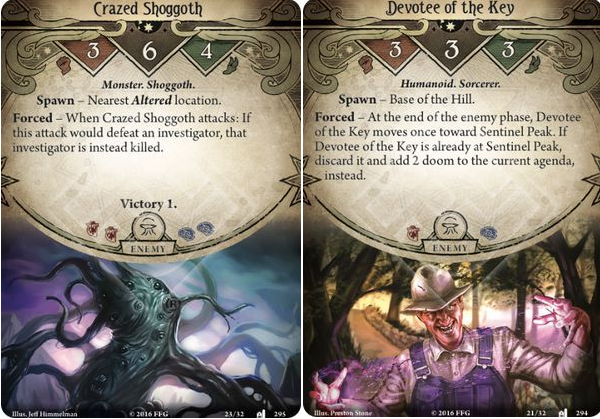 The rest of the encounter deck is made up of quite a mix of sets. The Thralls from earlier on make an appearance alongside our old friends of Ancient Evils and the Shilling Cold and Striking Fear sets, both designed to slow you down in your progress of course.

You don’t need to worry

Where Doom Awaits is a fitting penultimate, or final depending on how things shake out, episode to the story. A race to a remote area to stop an ancient ritual is a bit of a cliche of the genre, but that doesn’t matter when it is done so entertainingly and also at this stage feels earned. There is a real sense of the threat coming to a conclusion here and the results of failure are nothing less than the world being consumed by an ancient evil? Which one will have to wait till next time!

As the gate opens, you step through into only to find yourself Lost in Space and Time, coming face to face with the ancient evil that has been plaguing you throughout the campaign. Will you find your way, or will you and the world finally succumb to it’s will?

Discuss this article
Log in to comment
Posts in discussion: Beyond the Veil - The Arkham Horror Card Game: Where Doom Awaits

DarthJoJo replied the topic: #301467 05 Sep 2019 21:06
Like you I do appreciate that this scenario introduces not one but two different ways to permanently end your campaign, but otherwise nothing about this scenario really stands out to me. It’s pretty straightforward. The Devotee and second agenda are pretty great, too, I guess.

It’s worth noting that this is a pretty controversial scenario in the community. Having a poor intellect here can end your campaign pretty quick. It’s another scenario that received a pretty important revision with its Return box.

thegiantbrain replied the topic: #301623 11 Sep 2019 04:28
I haven't played Return to Dunwich yet, looking forward to doing so. This was the first time that they had introduced a way for the campaign to just end during a scenario that wasn't the final one so I think I was impressed with that at the time. It's definitely true that it punishes certain classes more than others.
Read More...