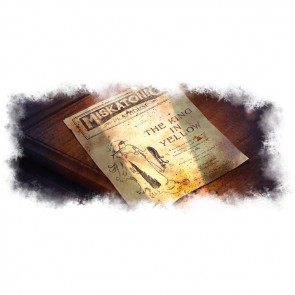 Game Name
Arkham Horror: The Card Game - The Path to Carcosa
Publisher
Fantasy Flight Games
There Will Be Games

This article will look at an individual scenario of Arkham Horror: The Card Game. These will be my impressions after playing through the scenario at least once and will be focusing on the mechanics and how those reinforce the story elements of a given scenario. These articles will contain extensive spoilers and assume a familiarity with the terms and mechanics of the game. Please do not read on if you have not played the scenario in the title yet.

All the world’s a stage,
And all the men and women merely players;
They have their exits and their entrances,
And one man in his time plays many parts,
- As You Like It, Act 2, scene 7, William Shakespeare

Nothing like starting a new chapter of Beyond the Veil with a quote from the man himself, someone to whom the stage was a simple plaything he could manipulate and cajole to do his bidding. So it is for our intrepid investigators as a lovely night at the theatre turns into something much more otherworldly: guided off stage by unseen forces that would bring harm to our world, into adventures they never thought possible. Fear not dear reader, for I will take you through the secrets held within this most excellent of campaigns for the Arkham Horror LCG.

Spoilers: If you thought the Dunwich Legacy was good, you ain’t seen nothing yet.

Act 1 – The Story has just Begun

You find yourself at the Ward Theatre in Arkham for a staging of the latest play to come to town, The King in Yellow, presented by the Miskatonic Playhouse. Such a thing may have passed you by if it wasn’t for the disappearances and deaths that have surrounded the play since it came to town. Alongside your fellow investigators, you feel these events are worthy of investigation and decide to give the play a look.

Settling down in your seats, you find the play dull, even pedestrian and find it harder and harder to stay awake. Falling asleep at the theatre is a time honoured tradition, and so you close your eyes as the monotonous words of the performers lull you to sleep.

Starting awake very suddenly, you find there are no performers on stage, lights are dim, curtains destroyed and you are sharing your seats with patrons who have most definitely lost the will to live. What the hell just happened?

Ok so it’s Act 3 in the narrative of the play, just bare with me. The theatre has a superb setup with the locations being what you might expect Lobby, Theatre, Backstage etc. The real cleverness here comes if you choose one of the new investigators Lola Hayes. Not only is she the first neutral investigator with some funky abilities, she is also an Actress who gets her own little bit of intro story and also starts backstage as she was in the play! Simple, but effective, bit of world building there.

Getting down to investigating the situation you find yourself now creeping round the very empty theatre, well apart from the numerous corpses and the beings from beyond. It’s worth looking at one of the locations in particular at this moment, for an absolutely beautiful piece of design.

The balcony has two exits: 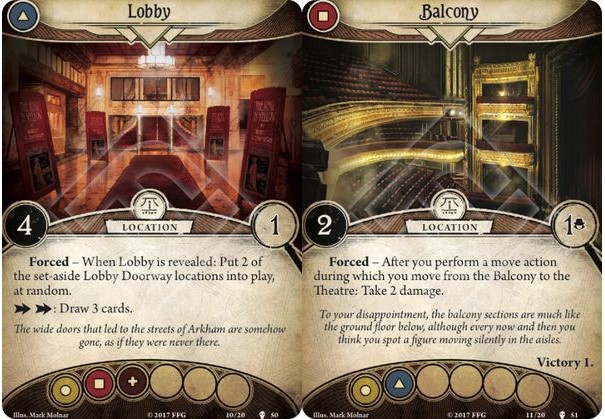 One is straight back to the lobby where you came from the other is throwing yourself off the banister back into the theatre below. This is a subtle piece of design that makes you think of how your character is acting in this situation: do they take the safe route back down the stairs or are they the sort of person that will fling themselves over a balcony in order to tackle an enemy or help out a friend. Very nice. 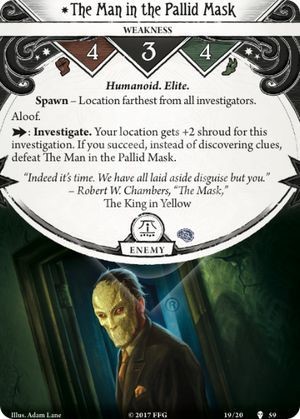 Naturally once you have found the main man things go from difficult to all the way south! Choosing one of three possible Act 2’s you pursue the ‘Man in the Pallid Mask’ either having a nice calm chat with him or chucking him down the nearest set of stairs. Ace, you’ve dealt with him. Unfortunately that seems to have led to fire, goo or water starting to pour through the theatre, causing all sorts of problems for anyone who isn’t a being from beyond. 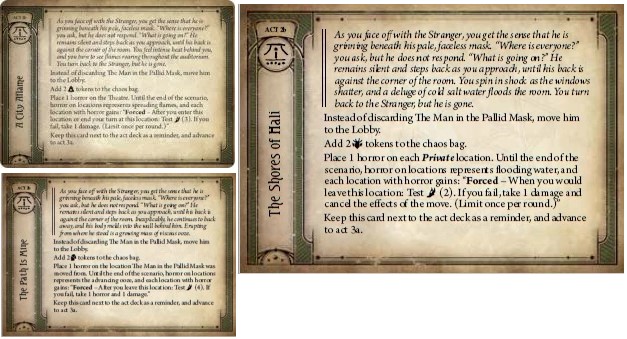 The final act sees whatever horror you have triggered spreading through the theatre at a pace, forcing you to run as fast as you can for the exit and hopefully escaping from the theatre with what you have learnt.

Whilst the Acts are ticking away the Agenda is of course doing its thing and this is another neat little piece of design. The Third Act agenda summons the Royal Emissary into play, a bit of a pain in the ass who is pretty horrific looking, I mean how many legs do you need? 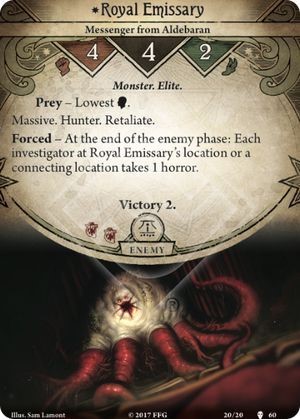 Who wants a kiss?

He’s not that tough right and it seems like it should be easy enough to kill. However this thing from beyond is going to keep turning up like a bad penny: Agenda 2a flips you back to Agenda 1a, which causes the Royal Emissary to turn up, that you have to kill to flip back to Agenda 1a which…..you get the idea. I really like this little loop and it’s elegantly handled with the minimum of mechanics. What happens if you don’t kill him? You don’t want to know. 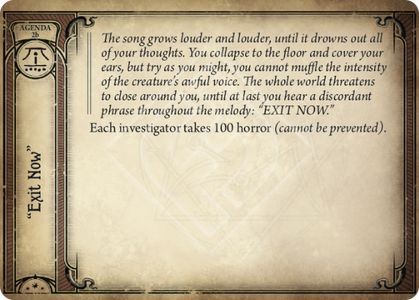 A new campaign means a whole new set of ways for the designers to mess with you and yours. Those bastards. The newest mechanic is the ‘Whispers’ cards which put an encounter card into your hand that may prevent you from triggering fast abilities. commit skill cards etc. Oh and as they are Perils you can’t talk to your fellow investigators about them. Initially I was a little lukewarm on this mechanic, but it really grew on me over the course of the campaign. Those moments when your friend draws an encounter card, puts it in their hand and then looks at you with that ‘We are so screwed’ look is just so sweet. I really look forward to them revisiting this mechanic in future sets.

Out of all the new enemies, the one who has caused me the most problems is the pesky little Poltergeist, troublesome to deal with without a spellcaster and your only other course of action means taking a while to read it some bedtime stories causing it to bugger off into the ether once more. 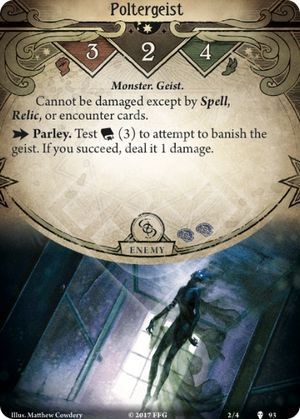 You can’t even hit it with a baseball bat!

The rest of the encounter deck is filled with some new and familiar nonsense. The Rats are back along with the Striking Fear set from the core. The newer sets provide some hard choices and new foes. A bunch of fanatics are running around with the cards to make them stronger. The Black Stars Rise to cause you to make a difficult choice and the Spires of Carcosa hasten the Doom requirements.

This encounter deck is designed to put pressure on you and make you tackle hard choices with the constant threat of the Agenda deck causing you to go insane if you don’t also tackle the ever present Royal Emissary. I really enjoyed the pressure the encounters applied in this scenario and though there was a good mix of monsters and mayhem constantly keeping the Investigators on their toes.

Burning Down the House

The Dunwich Legacy took what we knew about Arkham Horror and twisted it in new and unexpected directions. Whilst that campaign had it’s high points, Blood on the Altar, and low points, Miskatonic Museum, it was quite a ride and I’ve really enjoyed playing through it multiple times.

The Path to Carcosa is continues to build on the excellent work the team did in the Dunwich Legacy and takes it to new heights: this first scenario being a prime example of them coming up with new mechanics to surprise and horrify. The mechanical touches feel lighter here than they did in Dunwich, showing a maturing of the team’s ability to let story beats emerge naturally from the scenarios and allowing the players more ways to tackle a given chapter.

I’ve been enjoying the hell out of Carcosa and I am looking forward to delving back into each scenario as we peel back the layers to see what makes each one tick.

Discuss this article
Log in to comment
Posts in discussion: Beyond the Veil - The Arkham Horror Card Game: Curtain Call

ubarose replied the topic: #301849 19 Sep 2019 17:03
This is my favorite so far. Wandering around the theater felt so spooky. The Man in the Pallid Mask is so creepy and the Royal Emissary was totally unexpected and really horrifying.

thegiantbrain replied the topic: #301895 22 Sep 2019 03:13
I love Carcosa to bits and I am just starting to play through the Return to version. Completed the first 2 scenarios so far and the added variety is great and it fixes a couple of little issues.

ubarose replied the topic: #301922 23 Sep 2019 09:26
I'm glad to hear that Return is good. I bought it even though we haven't finished the entire campaign because I liked what I have seen of this campaign so far, and already know that I want to replay it. We have been getting the "well, you survived, but you really didn't succeed" result on almost every scenario.

DarthJoJo replied the topic: #301923 23 Sep 2019 09:46
My favorite part of this scenario is the introduction of The Man in the Pallid Mask weakness. Matt Newman loves his recurring mini-boss characters (the Harbinger in Forgotten Age, Spectral Watcher in Circle Undone), but this is probably my favorite. He doesn’t necessarily do anything, but you feel like you need to do something about him. Very evocative.

It’s a minor quibble with this scenario (for more in this campaign actually), but the map is almost too big. Depending on location draw, you can waste a turns just moving, which isn’t the most exciting. I do like big maps and the feeling of place they deliver, but moving is the second-least exciting action in the game.
Read More...