Beyond the Veil - Arkham Horror Card Game: Path to Carcosa - The Last King 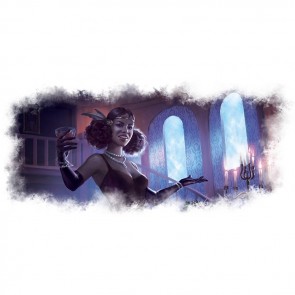 Game Name
Arkham Horror: The Card Game - The Path to Carcosa
Publisher
Fantasy Flight Games
There Will Be Games

This article will look at an individual scenario of Arkham Horror: The Card Game. These will be my impressions after playing through the scenario and will be focusing on the mechanics and how those reinforce the story elements of a given scenario. These articles will contain extensive spoilers and assume a familiarity with the terms and mechanics of the game. Please do not read on if you have not played the scenario in the title yet.

After the events of Curtain Call the investigators find themselves questioning if what they experienced really happened at all. Unless you were all defeated, Path to Carcosa starts to introduce one of its core mechanics in the immediate aftermath of your evening of theatrical horrors. After your escape do you Doubt what your eyes told you and choose not to inform the local constabulary, or do you give into the power of you Conviction and put your faith in the cops. Maybe on subsequent playthroughs you can choose a different path.

Whatever happens you put a tick under one of these choices for the scenario, and the lead investigator also takes The Man in the Pallid Mask card into their deck; he is bound to your fate now. The cops don’t believe your convictions and the path of doubt pushes you away from telling them but both make you end up at the same place: attending a fabulous party hosted by Constance Dumaine, featuring the cast of the King in Yellow at 1452 Atlantic Avenue. A nice party is just what you need, right?

Arriving at the party you find the gate open and the party in full swing. Well, something is in full swing anyway as you follow the blood trail up to the smashed front door and follow the eerie music inside. What is going on? Were you right about the events at the theatre? Maybe the people inside will have some answers. 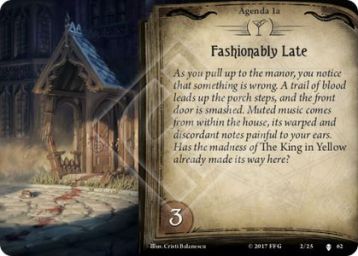 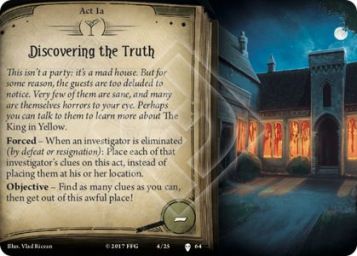 The Agenda Fashionably Late is going to flip fast so you better get on with Discovering the Truth….wait a second. There are no clue requirements on there, no way to turn it over! It just says get as many clues as you can! Interesting and also worth noting that if anyone is eliminated, or resigns, the Act soaks up the clues. Initially it looks as if this is a bad thing, but since the only way out is to resign or be eliminated, the Act is actually looking after our precious bundles of clues.

As you enter the party you see the important people scattered around various rooms, full of clues like tempting flesh pinatas. Making your way around the rooms you can gain the clues they hold through interacting with them: listen to Ashleigh sing, show off your money to the financier, ask Constance about the play etc. Each one is different asking the players to spread amongst the party and interrogate the people they are best suited to handle. Every one you successfully clear you mark as “Interviewed” something that will hopefully come in handy down the line, though the designers have led us down false paths before with the items we record in the campaign log. 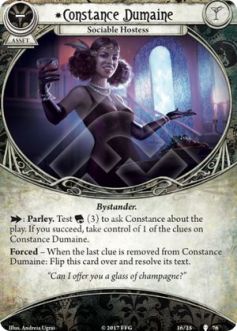 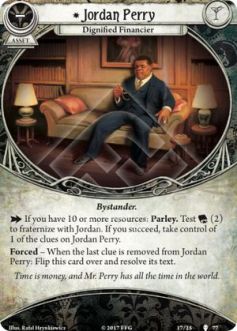 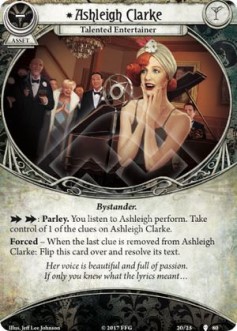 The rooms that make up the map of this scenario can also help out, depending on the layout of the participants. The extra cards from the Living Room and the money from the Ballroom can both prove very handy, whereas the other rooms show the more treacherous side to this mansion of fun. However, they are not always going to be in a position to help you as much as you might hope. Each time you play through this scenario the guests will be spread randomly amongst the rooms, meaning if Jordan is in the Ballroom for instance, you are going to have a trickier time dealing with him. 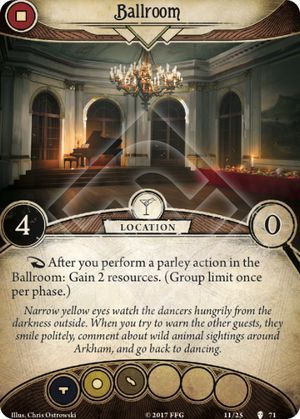 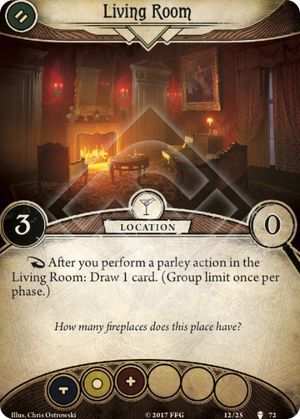 The pressure is on as you work your targets for information, with only 3 rounds until the Act flips and the final guest arrives; Dianne Devine. Appearing beside the guest with fewest clues on them, Dianne is a right killjoy with regards to your clue gathering plans; you can’t gather clues from any location she is in. Boo, boo Dianne. She is an easily dispatched annoyance but your problems are only just beginning. 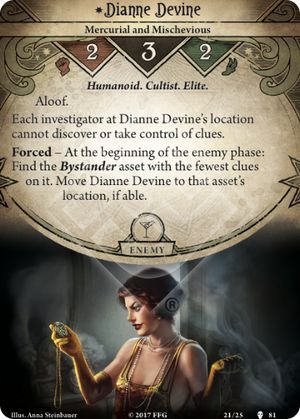 The final Agenda card is also a fast turn around but every time it triggers you are going to pull one of the Sickening Reality cards out from underneath the scenario card and the guests are going to ‘change’. The descriptions when the cast undergo metamorphosis are properly horrifying, leaving you with a vivid image of the warping of reality that is taking place before your investigators eyes. I loved each and every one of them. 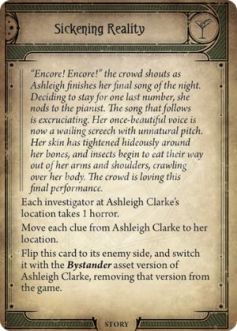 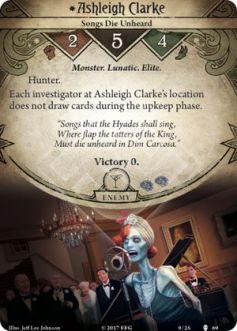 The race is now on to gather as many clues as you can before the cast turn you into set dressing: once the Sickening Reality cards are done, if the Agenda flips again, you join in these ‘festivities’, accepting this new reality for your own. The Foyer gives you a way out of this horrible mess with its resign ability but only you can determine when to make a break for it.

Running out the front door you escape into the cool night air coming to terms with what you saw. But did you really see it? Surely nothing that strange and horrific could be real. Each of the Resolutions you reach casts doubt in your mind of the events of the evening: you turn back to see the Mansion intact, a server wakes you as the party winds down with no evidence of the horrors you have witnessed or days later your reminisce, albeit hazily, about the wonderful party you intended.

As long as you didn’t run out of Sickening Reality cards per Act 2, you are sent to an interlude where you must decide what to do with the information that you have gained. This is new territory for the game, giving you much more to think about mechanically in between scenarios, although it has been touched upon in Dunwich.

These choices come down once more to whether you trust yourself or not; do you go back in as you Doubt what you saw, do you run in the hope of putting as much distance between them and you as possible or do you destroy those inside, following the Conviction that this is the correct thing to do. I mean they are definitely monsters, aren’t they?

The clues you have scooped up do thankfully pay off. For every 2 you have managed to extract from the cast, you gain 1xp to be split amongst the investigators as evenly as possible. This scenario can be quite the experience bonanza if you work fast enough. It is especially interesting on subsequent playthroughs, as you know the rewards can be great. It is worth noting that even if you get R3 from the back of the 2nd Agenda card you still get the experience.

This is just the beginning of your journey along the path to Carcosa but already we are seeing the theme of Doubt and Conviction come through strongly. Although there is a mechanic to this, the writing is also superb in casting shadows over the truth. You think you know what to do next, but do you?

The encounter deck for this scenario shares no cards with the previous scenario, giving you a fresh set of horrors to worry about. Excellent.

Both of the Treacheries associated directly with the scenario make interrogating guests that little bit harder. As the reality of the situation dawns on you not even some Fine Dining will help, causing you to go slowly mad or put clues back on the guests. Sometimes the guest might not like you asking questions making them a Tough Crowd to interrogate, costing you time. 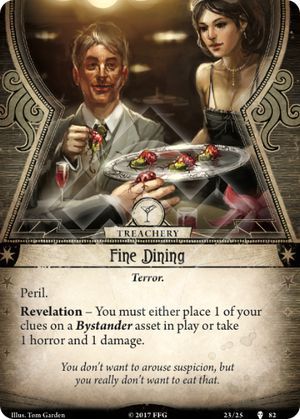 I love the art on Fine Dining, it is subtly horrifying.

Hastur’s Gift gives us some Lunatics, not to be mistaken for the Fanatics of the previous scenario, to battle and also a card that boosts their effectiveness; both Lunatics have interesting engagement abilities, especially the Young Psychopath who once more is chipping away at our sanity or becoming a problem to deal with.

The Decay and Filth set is all about slowing you down; destroying items, making the shroud value high and introducing a creature, the Roach Swarm, that feeds of the increased difficulty to find clues at each location.

Our old friend Ancient Evils is back to occasionally poke the doom level up by unexpected amounts but the most interesting set comes from The Stranger. Now that the Man in the Pallid Mask is in someone’s deck this set will make an appearance over the course of Path to Carcosa, giving him strength, causing him to attack and making him appear before he is drawn naturally. 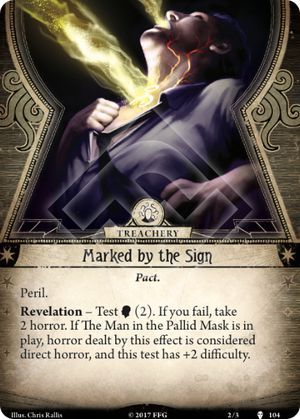 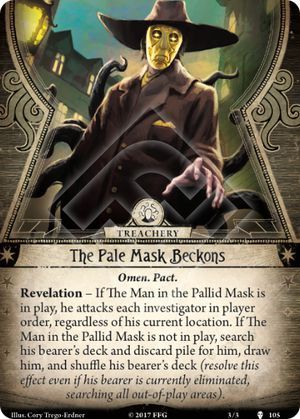 Overall the encounter deck for this scenario is fairly straightforward with the usual delaying cards you might expect. Since the scenario puts so much pressure on the players this seems like a smart move, allowing the investigators to push their luck as they try and scoop up as many clues as they can before getting out of dodge.

Path to Carcosa is a fantastically strong product; new investigators that play with the mechanics of the game, a great set of player cards and two scenarios that tread new ground for the franchise. The interlude shows the writers willing to not only play with the mechanics on cards, but also mess with us as we pass between scenarios: making decisions that may, or may not, affect us somewhere down the line.

One more thing. You want to look at the back of Act 1. Don’t you? Do you have the courage of your Convictions or do you Doubt there is anything there? Well I think the choice is very much up to you.

Discuss this article
Log in to comment
Posts in discussion: Beyond the Veil – The Arkham Horror Card Game: Path to Carcosa - The Last King

I need to play this one again with new players just to see their reaction to that first Sickening Reality draw.

thegiantbrain replied the topic: #302385 11 Oct 2019 13:19
It gets a bit harder in Return making it less of an experience pinata. I do love the sickening reality cards, they are genuinely horrifying.
Read More...