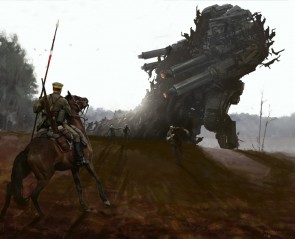 Game Name
Zombie Faction: Scythe
Publisher
Fan Made
Designer
Per Holmgren
There Will Be Games

Locals have arrived at the Factory in alarming numbers, wild-eyed and demanding entry! They bring tales of the dead stalking the night, whole villages and even towns devoured in madding cadaverous frenzy!

Locals have arrived at the Factory in alarming numbers, wild-eyed and demanding entry! They bring tales of the dead stalking the night, whole villages and even towns devoured in madding cadaverous frenzy! Their incoherent ramblings are inciting further panic in the surrounding populations, which risks destabilizing the whole region! The custodians of the Factory have sent messengers to the surrounding nations, asking for aid in dealing with this local disturbance. Seeing an opportunity to increase the standing of your nation, you lead a force to the Factory. Expecting that rational arguments will make the peasants come to their senses, you are convinced this is nothing but a case of mass hysteria. It is obviously due to a chemical waste spill or similar, perhaps even from the Factory itself? And if diplomacy fails, a show of force will surely drag these superstitious simpletons into the 20th century.

Designed by Per Holmgren back in 2019, Zombie Faction is a fan-made variant for Stonemaiers’ steampunk, engine building, Scythe. Inspired by the PC game: They Are Billions (a zombie defence game), this homebrew variant brings a new set of elements to the original game, one of them being- you guessed it, Zombies!

Available as a player faction or an automa, this variant will twist your strategy plans and make you think even harder before choosing your next course of action (as if it wasn’t complicated already). As an automa, the zombies have their own Automa Deck and a new set of aggressive rules. While they have no Mechs or characters, zombie units are used as workers with the ability to defend and attack. This means any territory they occupy can be defended, and even worse, serve as the starting point for an attack. Sometimes they’ll be able to move two hexes per move, swinging around you and attacking from an unexpected direction. Oh, and since our zombies like eating brains, they will gain +1 popularity for every worker who retreats to his homebase.

While their “dead” faction may have some cool abilities, playing them as a faction isn’t easy at all. Your most powerful course of action will be to spread over the map and infect villages, while at the same time placing your structures and Infected Buildings. These will later help you in securing territories and allow you quick movement across the board. But spread too thin and you’ll be an easy target for players.

As the zombies, you’ll have to constantly strike fear in your opponents and prevent them from regrouping. You’ve heard right- as factions who are eager to defend their lands, you’ll be able to form a military alliance with another player and place your units on his territory (or his on yours). Sharing resources placed on the territory will be available, as well as play power and combat cards together when defending.

Carefully planned and play tested dozens of times, this fan-made variant fits Scythe’s style in terms of balance and gameplay depth. It also brings along custom designed components that fit the original game’s style, all available for PnP at Zombie Faction Variant.

While this variant seems like another “zombie-apocalypse” scenario, it will certainly turn your game into a feast for the dead. Will you dare confront the zombies? What better way to find out than try for yourself!

ubarose replied the topic: #319799 26 Feb 2021 13:27
Welcome Tomer Helzer of This is Fan Made. Tomer will be sharing free PnP fan made variants with us on a, hopefully, weekly or by-weekly basis.