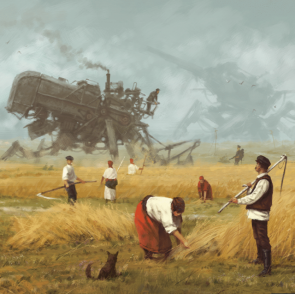 Game Name
Scythe
There Will Be Games

With the rise and fall of empires in Eastern Europa, communities which had long been relegated to a subservient existence beneath the heel of the great powers began to dream of a better, more secure future. Nationalist movements emerged among the Balkanian and Yiddish peoples, seeking to establish new states out of the rubble of the Great War. Meanwhile, the wandering bands of Romantic began organizing to preserve their nomadic way of life.

Designed by Ahmad M. Siddiqi in early 2020, Underdogs of Europa is a fan-made variant for Stonmaier’s “steampunk” Scythe. It consists of 3 new factions: the People’s Republic of Balkania, the Yiddish Commune, and the Romanti Nomads.

After suffering from the Great War which has finally come to an end, all three factions bring their own rage and revenge to the battlefield of Eastern Europa. And as with every great Scythe variant, Ahmad has created a unique background story for each of his three new characters: Jelena (Balkania), Moshe (Yiddish), and Luminita (Romanti).

With new faction abilities, Mech powers and character specialities, each faction offers a new strategic advantage to take over Eastern Europa. The Balkanians, for example, have no permanent, river-crossing Mech or Character abilities, but their workers are capable of sending off opponent worker units on their own. The Yiddish Commune are well known for their resourcefulness abilities, and therefore will gain 1$ for every pair of resources they possess at the end of the game. For every set of four different resources they will earn 4$ at the end, however, for every territory under their control, they will lose 1$ at the end of the game.

The Romanti Nomads hold true to their veteran navigation skills, and therefore possess unique powers on the board. For instance, the Strike Camp Mech ability allows you to immediately retreat your units if attacked by an opponent player, moving to an adjacent territory and fleeing from an unwanted battle. The Trespass ability will allow you to move through enemy territories without triggering any effect, including battles and retreating workers to homebases. When moving out, you won’t carry any resources with you, and will simply go on with your travels.

In addition to the new faction abilities, Underdogs of Europa comes with its own STL files for miniature printing- including highly detailed characters and mechs. Faction mats with unique art graphics and tokens are also available for printing, and for those of us who are still stuck at home, an Automa is available, adjusted to play as each of the factions and their powers.

All files and rules for Underdogs of Europa can be found at ThisIsFanMade.