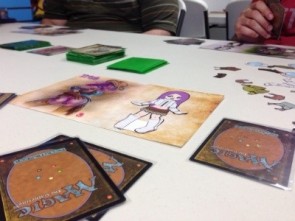 There Will Be Games
In designing Glamazons vs the Curse of the Chainmail Bikini, I came up with a few guiding principles that would shape my thought process and allow me to somewhat objectively assess progress and eventual success.

The first goal I put forward for myself is easily my favorite, I've called it “the drunk Steve Avery rule”. Its only stipulation is that I want the game to be teachable to a drunk Steve Avery. It seems silly, but by keeping this in mind I was able to really cut out a lot of extraneous mechanical cruft and get down to the core of what made the game fun. Personally I'm a huge fan of things like variable player powers, tech trees and special exceptions to every rule, and while it can add a huge amount of interest and replayability to a game, it also makes it much harder to teach, balance and most importantly, let the mechanics step into the background.


Which leads to my second guiding principle; make the game about the players, not the mechanics. I want a game where the rules exist to facilitate interesting interactions between players. Something like Werewolf is an obvious example of a game with minimal rules where most of the game takes place above the table in the interactions of the players. Diplomacy is another fabulous example despite having more complex rules; once you have them down, the game is all about how you interact.


With these two principles I was able to really distill down everything until I was left with just the crux of what makes a bluffing game fun. Do I need all the set up of moving dudes around a map or building a city to get to that moment where two players are staring at each other across the table trying to second and triple guess each other? Nope! That's not to say that having bluffing as part of a much larger game is bad, but it creates a very different experience and is not what I wanted with Glamazons.


My third principle is that I want to do something unique where the art and components played a major role.  Anything in the analog playspace needs to make a strong case for its own existence. If your game plays much better digitally, then why do I care about getting it in cardboard on my table? I think there are two major ways to achieve this, one mechanical the other physical; the social aspects demand face to face interaction and/or the physical components have an interactive element that works best in actual reality. A negotiation or bluffing game isn't going to work near as well on iOS nor is a dexterity game. With Glamazons I managed to get both sides of the coin in there; pure bluffing mechanically and fun paper doll dress up action physically. I really don't see any way for the game to still be fun digitally, which might cut out some marketing possibilities down the line, but I think makes for a much better product.


I also want people to see the game and immediately want to know more. Something like Twilight Imperium is impossible to ignore the first time you see it set up on a table or even the first time you see that massive coffin box with its majestic space cat staring back at you; I want to know more about THAT! By combining really high quality art and the concept of playing dress up with paper dolls, I think we've got something that demands attention when you see it.


The final design goal I have with the project is to explore something more than just mindless fun. The question of boardgames as an expressive art form is a huge one best left for another discussion, but people like Brenda Brathwaite with her game Train are absolutely doing something interesting and special.  (Seriously, go check it out!) As much as I love mindless fun, with this project I wanted to do something a little more. To wax philosophical for a moment, I think one of the best ways to address heavy social issues is through humor. Sexism, rape culture and the generally dismal state of female media depictions, especially in the gaming world (both analog and digital) is a really serious problem and one that we should be looking at. Addressing “the curse of the chainmail bikini” is a lighthearted way to hopefully start a dialog about a pretty serious subject. Every single person I've shown the game to or told about the theme has immediately gotten it; female “armor” is usually out of control ridiculous.


For me, having these ideas in place, at least in a basic form, allowed me to much more effectively develop the game and work through all the ideas I (and playtesters) had about what could be part of the game. I had almost everything else in place before I actually started to work out mechanically how to handle a bunch of female warriors fighting over proper armor. The theme and design goals informed the entire mechanical development and I think the end result is a game that is nearly perfect in terms of what I set out to accomplish. Something worth noting is that while I consider it be be a base tenant of games and thus an obvious first gate in my design process, “it needs to be fun!” is something that a lot of designers don't think of as a requirement.


Maybe I'll go into more detail with some or all of these in later posts; is there anything people are more interested in? I absolutely have a lot more to write about the depictions of women in gaming media, so look for that soonish.


Fun Fact: The current iteration of the rules has a lower word count than this piece...