Adding the Replicators to Space Empires 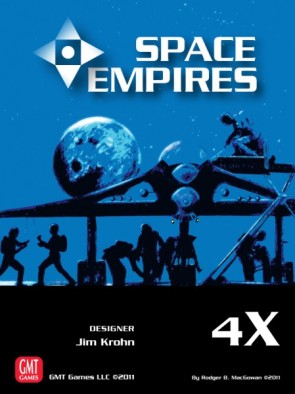 Jim Krohn is the creator of our really cool 4X space game, Space Empires. In the expansions to SE, Jim has managed to give us a bunch of cool new additions and options without making the game unwieldy – a considerable design accomplishment. In this, Jim’s first article for InsideGMT, he takes us inside his newest expansion, Space Empires: Replicators, on the P500 list now and slated for release in 2Q or 3Q, 2015. Enjoy the article! – Gene

Space Empires: Replicators is the second expansion to Space Empires:4x.  As the designer, I wanted to share a little bit about the design philosophy for the expansion.  This expansion introduces a number of great things that add to the game play:

The coolest thing, however, and the name sake of the expansion, is the addition of the Replicators.  Replicators are “Von Neumann” machines, a class of machines that can replicate themselves.  It introduces a possible 5th player to the game as well as adding another way to play it with just two players.  While the first expansion had empire advantages, which gave each player a special power, the Replicators are a different animal altogether that play completely differently from all the other players.  It is not just an empire with a special power, it is a new way of playing the game – they don’t have the same ships, they don’t have the same tech tree, and they require less book keeping.

While there are many things that I enjoy about SE – exploration, building an empire, etc. – there are a couple of things that it really does differently from other games and that give the game its draw (for me at least).  So, in designing a completely new faction, it was important to me not to lose those elements.  In order to illustrate what we did with the Replicators, I first have to explain a couple of things in the original design.

You have to push forward in SE.  It does this first with the spread out nature of your empire.  It is very hard to guard it all.  You might be able to defend your home planet, but in doing so can you also stop your opponent from picking off a colony or two?  Defending on your doorstep is dangerous for that reason.

The other way the game does this, however, is a little more subtle.  Technology is powerful in this game, but it can be countered.  For example, Fighters are very powerful…unless your opponent has Point Defense.  Rarely in SE do you get through more than half the tech tree.  In fact, this was a large complaint of some of the companies that rejected the publication of SE.  It took Andy Lewis and GMT before I was able to convince someone that this was a feature, not a flaw.  With the fog of war in the game, since you don’t know what is coming at you, it is almost always better to find out about it in the middle of the map than over one of your colonies.

Of course, there are other things that make you want to be careful with your resources.  Ships cost money and you don’t want to waste them.  They also cost maintenance so you don’t want to build them if you are not going to use them.  Ships don’t automatically upgrade technology either so you have to balance that ship build with your technology research.  Without the need to take space, players would be more apt to just sit back and just try to build a perfect fleet.  SE forces you to almost always build and launch a fleet before you want to.  That leads to a lot of tough decisions along the way.

There is no one best ship in the game.  Earlier in the game, the smaller ships are very powerful but, as your attack and defense technology increases, that all changes.  A ship’s size limits the strength of the attack and defense technology that it can carry.  Battleships fielding Attack Tech 1 and Defense Tech 1 will likely lose to a massed fleet of Destroyers and Scouts with the same technology.  Later in the game, armed with Attack 3 and Defense 3, the Battleships will win.  This is all dependent on so many things – how far you are into the game, which is dependent on the size of the map, whether money has been spent on other technologies, the terrain, and how aggressive your opponent is.

On the other hand, the last thing you want to do is to launch a fleet that will get chewed up and cost you a lot of resources.  Keeping your pulse on the technology shift during the game and knowing what to build and when, this leads to more interesting decisions, especially in light of your constant need to take space.

In designing an entirely new faction, especially one as drastically different as the Replicators, I stood in danger of changing the way the game played.  I think the above really add to the decisions and the strategy of the game.  What I didn’t want to do was break those key elements that make the game fun.  Here’s a look at how the Replicators work and how they were designed in a way to keep those same decisions in the game for both players.

What they don’t have:  Replicators don’t have ship yards, don’t pay maintenance, don’t have a tech tree, don’t have MS Pipelines, and don’t produce CP at their colonies.  I told you they were different!

Instead, when a colony reaches “Full” growth, it stops growing and thereafter produces a ship with a single hull space every turn.  At the start of the game the ships that can be produced will not be very powerful.  Later these smaller ships can be combined into larger, more powerful ships.  The Replicator player does not do “Research” like a normal player.  Instead, the Replicator gains Research Points based on the technologies of other players that he encounters.  These Research Points then allow them to produce better ships.  Replicators also have special ships that can counter some of the technologies the non-Replicator player can throw at them.

They can get CPs from minerals by collecting them with any available ship.  This is important because this is one of the few ways they can get CP.  They can use this precious CP to get Move Technology, extra Research Points, or a pull a couple of other tricks.

They also have colonies that require special technology to completely eliminate (of course Titans don’t need that technology because they can take care of the entire planet and the colony with it), they can colonize a planet with any ship (so they can destroy a non-replicator colony and immediately plant one of their own), and their colonies will use up all of a planet’s resources and deplete (become useless) over time.

How This Meshes with the Design Philosophy

The Replicators play completely different, but face the same challenges.  They want to get out into space to grab every precious mineral they can find – because the CP is rare for them.  In fact, it is not uncommon for every deep space hex to be explored in a Replicator game.  They also want to encounter non-replicator players because that is how they “learn” and then can produce better ships.  They also are vulnerable to some of the non-replicator player technologies so it is always good to find out what is coming in order to counter them.

On the other hand, they pay no maintenance, so there is also an incentive to build up the largest fleet possible.  There is no “cost” to having a large fleet.  However, since their colonies will eventually deplete and stop producing ships, they don’t want to “waste” any of their ships – there is only ever going to be a finite number of them.  Depleting planets also form a bit of a ticking clock that motivates the Replicator to push forward and grab more colonies.  These counter points incentivize the Replicator to push forward – sometimes carefully, other times almost recklessly, depending on the game situation.

Since the Replicator player plays very simply and requires very little book keeping, this may actually be a great way to introduce people to the game.  I’m not completely sure about that because I have mostly playtested the game with seasoned vets.  I am pretty sure, however, that if you had an opponent who liked Space Empires, but was a little put off by the book keeping, then they will really enjoy the Replicators.

Visit Inside GMT for more news and articles http://www.insidegmt.com/?p=1211

ubarose replied the topic: #197229 09 Feb 2015 16:28
Thanks for pointing that out. I've been having some problems with the first paragraph not being displayed in articles, or displaying twice. I fixed this article, and am working on fixing the bug that is causing this.

You put your name down on the list with intent to buy at a discount. Your card doesn't get charged until they are ready to ship. Production doesn't happen unless they reach 500 promises. You can pull out at any time up to the point your card gets charged.

There are no 'exclusives', 'stretch goals' or any of that bullshit.

ThirstyMan wrote: Riiight...anyway does anyone have a copy of this game they want to give me? I mean the base game.

It must be a good game because I've been attempting to trade for it for a long while now to no success. I guess I'm going to have to buy it one day.