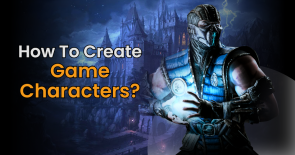 Designing game characters is one of the most important aspects of creating a game. Your game's characters make it unique and interesting, and they're also what players will connect with and remember long after they've finished playing.

There are many things to consider when designing game characters, such as their appearance, personality, backstory, and role in the game. This guide will discuss some of the key elements to creating compelling game characters.

Who are Game Character Designers?

Character designers must work closely with game artists and animators to ensure that the characters they create are visually appealing, the game design is perfect, and fit well into the game's overall art style.

What is Character Design in Games?

Character designing in games is the process of creating the look, feel, personality, and backstory of the game's characters. This includes everything from game appearance to personality.

In addition to appearance, character designers must consider personality and backstory when creating their characters.

After all, players need to be able to relate to and connect with the characters they're controlling. Creating believable and compelling game characters is a challenging but essential part of making games for video and mobile.

What Skills do Game Designers Need for Character Design?

When it comes to designing game characters, there are a few key skills that game designers need.

After all, they need to be able to come up with creative ways to make their game characters stand out from the crowd.

When it comes to game characters, there are a few key things that make for a good design.

Players need to be able to connect with the characters they're controlling. Otherwise, they won't care about them. Creating game characters that meet all of these criteria is no easy task. However, it's essential for making a successful game.

Types and Classes of Game Characters

There are many different types and classes of game characters.

The most common type is the protagonists. Protagonists are the main characters of a game, and they're usually the ones that players control.

Other common game characters include antagonists, supporting, and non-player characters (NPCs). Antagonists are the villains of a game, while supporting characters help the protagonists on their journey.

NPCs are characters that players can interact with but don't directly impact the game's plot.

When designing game characters, you must consider what type or class of game character you want them to be. This will help determine their appearance, personality, and role in the game.

How to Create a Game Character? (8 Steps Guide)

To create game characters that players will love, designers need to understand human anatomy, think creatively, and have excellent communication skills. Creating game characters can be a daunting task, but it's essential for making a successful game.

1. Start with a character archetype - There are many different archetypes that characters can fit into. Some examples include the hero, the villain, the love interest, the comic relief, etc.

2. Decide on the character's appearance - Make sure your character stands out from all the other characters in your game. This includes their physical features, clothing, and accessories.

3. Develop the character's personality - Think about what makes them unique and interesting. Determine the character's appearance, personality, and role in the game. This includes whether they're shy or outgoing, kind or cruel, etc.

4. Give the character a back story - Game characters are more compelling when they have a rich history. Where do they come from? What motivates them?

5. Write up a character profile - This should include all the information you've gathered about your character. This will help you keep track of all your character's essential information, such as their name, age, height, weight, eye color, hair color, etc.

6. Test out your design - Make sure your character is well-rounded and fun to play as. Testing of the game is very much required.

7. Make adjustments as needed - Don't be afraid to change things about your character if they're not working well.

8. Be creative and think outside the box -This will help you develop original and unique game characters.

So there you have it! These are the key things you need to know about game character design, and you'll be well on your way to creating amazing game characters that players will remember long after they've finished playing your game.

As technology advances, so does the game industry. This means that game character design is constantly evolving and changing. In the future, game characters will become even more realistic and lifelike as designers continue to push the limits of what's possible. We may even see game characters that are indistinguishable from real people.

So whatever the future holds for game character design, one thing is for sure: it's going to be exciting!

Get out there and start creating!