Another Game Z you're going to Want 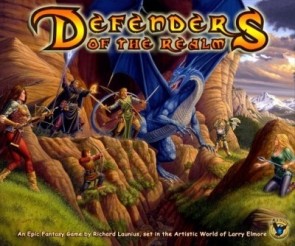 Defenders of the Realm was just picked up by FRED distributors to be produced and released hopefully at Origins 2010. I helped demo the game at the last Origins and it created quite a buzz.  There was quite a demand to try it out and unfortunately I had to slip away several times just to get in other games.  Defenders is one of the few games that I will not turn down because the game is always tense and challenging but retains a lighthearted adventury feel. It provides the thrill of mowing down hordes of enemies, lots of decisions about what to do each turn and a quest element that is he ultimate determination of victory. That is of course, providing you actually manage to save the Realm- which is quite difficult.

Each player has a character who with the other players is collectively trying to prevent the downfall of the kingdom. All hell is breaking loose because four generals are moving toward the central city and their minions are popping up everywhere. As they populate the land, it begins to become tainted.  Should a general ever take the centrally located monarch city the game is lost. Running out of taint markers or having too many minions on the board also spells defeat. To win, you need to kill the four generals which is problematic because the game ramps up as the generals are killed. As they fall the others rush forward and the minions redouble their efforts. The beginning  mid game and endgame all have different pacing which leads to a nice climax at the end.

Gameplay is pretty straightforward. Each turn you have a meager 5-6 action points to spend. You may move, fight, attempt a quest, or take special actions such as building a gate or try to cleanse the land. Everything costs action points and you can sometimes shave a few by spending cards to expedite travel. Fighting involves rolling a die for each minion with a 3+ killing orcs, 4+ killing undead and demons, and 5+ killing trolls. If you end you move in a spot containing minions they hurt you and decrease your action points(health).   Orcs pop up in droves, Demons taint the land faster, undead cause extra wounds, and trolls are just plain hard to kill. You have your own set of character specific abilities though which help even the odds. Each round after you take you actions moving, killing, and questing you draw two cards and then a Darkness Spreads card which spawns minions and moves generals. The cards you draw can augment your movement or be used to attack generals. To attack a general, you travel to their location, eliminate their minions and spend cards matching their suit.  Each card spent provides a die roll to attempt to defeat the general (each of whom *also* has a special power.) After generals are defeated, their minions become very easy to destroy and if completely removed they do not return.

Sooo why is this fun? It is fun because things rapidly spin out of control. The game balance is such that you never quite feel like you've got a handle on things and even if you're optimistic, things can go badly very quickly. There is also some lucky breaks and clever use of character powers. I'm delighted the game made is going to be availbel to the public because I rank it as one of my most favorite games (right up there with Thunder Road and Cosmic Encounter)