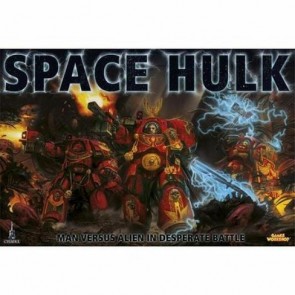 Thanks to fellow FA:Ttie Dysjunct, I was able to get my hands on a copy of SPACE HULK this late in the game. He generously offered to send me a copy if I paid for the game and shipping and it finally arrived yesterday.

Once I found some time to relax and open the game yesterday evening, I punched out all the cardboard and assembled the marines. I was utterly amazed at how heavy and packed full the box was. The minis were nearly poking through the front of the box, and the floor tiles underneath the sprues were a bit scratched and slightly torn from the genestealer claws and stuff. The largest part of the librarian was actually punched right out of the sprue from all the pressure. Nothing was broken, though (unless you count the librarian, which was actually broken in the RIGHT places).

Prepared for the pieces to shatter at the slightest touch by all the winging threads on BGG, I grabbed my trusty toe-nail clippers and went to work clipping the minis from the sprues. I got them out and clipped off the little stubs where some sprue was hanging on and then stuck them together. I need to glue one of the marine's arm on because I jammed his arm on the wrong way and ended up breaking the rod, but besides that, all the marines stuck together without glue just fine.

Since our budget is really tight right now, I had to sell some stuff to make up for the cost of Space Hulk. Mostly my old Warhammer 40k stuff, which has gotten me a surprising amount of money. Some dude in France bought my old Land Raider for $74 ($61 bid + $13 shipping)!!!

Anyway, I'm excited and ready to play it! (I'm in no rush to punch out the genestealer, because I already have a bunch from my WH40k days)