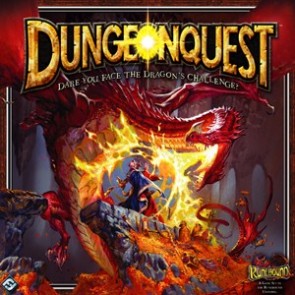 Back in the late eighties, DungeonQuest - from Games Workshop Games at that time- was the second hobby game I ever bought (Talisman being the first). The selling points were I could play it solo, it looked freakin' gorgeous when laid out and according to the game store owner there was 15% survival rate. WHAT?  I mean, was this a cheap gimmick like those B- Horror films that provided medical staff in the theatre to deal with the imminent heart attack?  I was intrigued to know whether a boardgame could back up such an audacious claim and at the same time could be a fun experience as well.  After twenty something years and countless games, I can proudly HELLZA, YES!! So it was with great delight when I found out that Fantasy Flight Games was going to re-release this classic out of print Ameritrash title. Be warned that comparisons between the two are inevitable.

The object of the game is to gather as much treasure as you can and escape the dungeon before being killed by its traps, events and/or creatures. If you are brave enough (or foolish enough) and manage to make your way to the centre of the board you can attempt to steal the a mother lode of treasures, providing you don’t wake the sleeping dragon

There will be various encounters such as searching the corpse of a dead adventurer or trying to overcome lethal traps. How far you go, is up to you and of course the dungeon

DQ is ultimately a wickedly nasty push-your-luck, racing adventure game. That’s right a racing game. Why do I say that? Players have certain amount of time to get in and out of the dungeon before nightfall arrives and it closes its doors, trapping the hapless adventurers inside. Turn sequences clip along at a brisk pace and most events are resolved by merely rolling a die or two (depending on the edition). The only part that takes the most time to resolve is combat. Unfortunately this is the biggest gripe I have with the FFG version.

In the GW version combat was resolved by a rock-paper-scissors mechanic. Nothing revolutionary but it was simple, straight forward and took very little time to resolve. If a creature didn’t flee combat both the hero and monster player (a non-active player) would take their three combat counters in hand -Mighty Blow (rock), Leap Aside (paper) Slash (scissors) - secretly choose one and reveal them simultaneously. Depending on what action was played one or both players would suffer damage. Whoever dealt the fatal blow would be the victor and play would pass to the next player. Not only did it keep things moving but in terms of narrative, but it was very clear as to what happened in the battle. (Volrik the Brave split the Orc in two with his Mighty Blow as the greenskin tried to feebly slash at the Hero).

FFG’s version on the other hand expands on the RPS concept but with a weighty, heavily abstracted and time-consuming card battle mechanic.  There are five different monsters each with its own unique 4 card deck or Power Cards and 4 hidden life point counters that the non-active player will draw from to determine its life points. The hero also has 4 Power cards as well and when an attack occurs both players will randomly draw 1 Power Card into their hand and add 4 more combat cards from the shared combat deck.

Combat Cards contain a damage number (1-5), an attack type (melee, ranged and magic attacks) and possibly a counterattack symbol. There will be three areas to which cards will be placed during the battle: the Hero’s Damage Stack, the Combat Stack and the Monster’s Damage Stack.

Each player will secretly choose then simultaneously play one card. The damage values are compared; the higher numbered card goes into the loser’s Damage Stack and the loser’s card gets placed in the Combat Stack. Now, if the lower card had a symbol on its counter-attack area that matched the higher card’s attack type symbol, the player could place additional cards from her hand with the matching counter-attack symbols until she either equals or exceeds the higher value card. If she equals the higher card’s damage value; all cards go to the Combat Stack but if she surpasses the higher valued card those cards go into the opponent’s Damage Stack. Still with me? Okay, now supposing combat has gone on a couple of turns and there are a few cards in the Combat Stack (which, to remind you are all attacks that have failed to hit either sides), cards are played and one side is higher than the other (either by counter attacks or regular attack). The winner moves her card to the opponent’s damage stack along with ALL cards from the Combat Stack that match the winning card’s attack type in what is called a “Deathblow”. The number of cards (not the damage value) in a person’s Damage Stack equals the number of damage it has taken from combat. Combat ends when the number of cards exceeds that persons’ (or creature’s) life points.

Am I a card combat hater? Hell no, I LOVE Horus Heresy’s card combat system but I’m not convinced that DQ requires this level of card play and abstract combat resolution – My sword wielding Barbarian-Dwarf Krutzbeck destroyed that Troll with three magical cards and two ranged cards?

I can’t wrap my head around what the Combat Stack is supposed to represent in terms of actual combat.  Why can a stack of damage that previously failed to hit manifest itself into a lethal attack later on.  What I see is a kind of “catch-up” damage mechanic rather than a logical narrative & combat related mechanic.

This also takes a bit of time to set-up, resolve and clean-up. Any pacing that the game has created goes right out the window. This process is laborious, tedious and nebulous. I’d go so far as to say I wish that they had stuck with the older combat system and included this new one as a variant.

The litmus test for me occurred after having played a couple solo games I asked my oldest child to play. She picked up the new combat fairly quickly but by the third monster battle she became frustrated because the fight was- in her words- “becoming boring”. 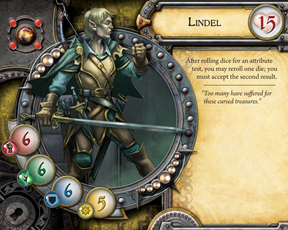 Do I wish that they didn’t tinker with the game at all? Not at all. I like the new heroes with their special abilities and that they have tied them into the Terrinoth world, which makes just as much sense as when GW did it with their edition of DQ and their Warhammer world. Small changes like making a revolving room searchable or including and improving upon the old Catacomb expansion are most welcome. The game also includes “determination” tokens which make it easier to pass an attribute test that one may be stuck on which I ‘m lukewarm towards but it’s not a deal breaker. The game timer has also been adjusted. Where the older version gave players 26 turns to escape FFG’s version gives players possibly longer turns based on the roll of a d6 after the 26th turn.

Hey, the fact that DQ was reprinted is awesome and the production quality of everything from the board to the figures (why, oh why couldn’t BOW have these?) is top-notched. I just think that the current combat system feels totally out of place within the context of a quick, tight racing adventure game.

I don’t think that owners of the older versions are missing out on anything here. To future owners, if my gripes about combat seem unfounded and you’re looking for a dangerous hard-ass dungeon crawl adventure game (with what I’d unscientifically say has a 30% survival rate) then DQ is the game for you.

Some of my influences: