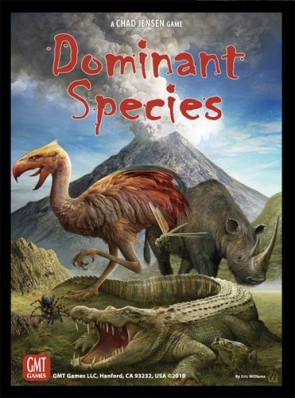 This is an area control game driven by a worker placement engine. All "workers" ( called Action Pawns, or APs) are placed on a large chart on the board, then resolved from top-to-bottom and left-to-right. The various rows allow you to modify the game in some way, many of which have subtle interactions with each other and require either tactical flexibility, long-term strategic planning, or both:

1. Initiative (next turn's AP placement order)
2. Adaptation (modifying your animal to exploit the changing map)
3. Regression (loosing prior adaptations)
4. Abundance (seeding the map with new resources)
5. Wasteland (removing resources from the map where they intersect with the ever-expanding glacier)
6. Depletion (targeted removal of a resource from anywhere on the map)
7. Glaciation (expansion of the ice-sheet, turning a targeted map tile into low-scoring, resource-destroying Tundra)
8. Speciation (increase your population around a targeted resource)
9. Wanderlust (exploration/placement of a new map tile and placement of a resource on that tile)
10. Migration (movement of on-map population)
11. Competition (reduction of co-existing opposing population on targeted terrain tiles)
12. Domination (scoring VPs on a chosen tile and allowing the best-adapted animal on that tile to execute a powerful Dominance card)

Finally, populations that find themselves unadapted to their current tile become extinct (removed), Bonus VPs are scored for control of the expanding ice-cap, and everything is reset for the next turn.

VP scoring is based on population majority, while the right to use a dominance card *when that tile is scored* is based on how many of your animal's adaptations match up to the resources touching that tile (resources are always placed on tile corners, influencing several tiles at once). Animals can have up to six adaptations, and multiple copies of the same resource are allowed, so it's quite possible to specialize. This involves some risk, however, as the map is ever-changing, and adaptations can actually be lost. Each turn 4 resource types become available as adaptations, but there are only three adaptation slots in which to place APs. Any un-selected resources slide down into the regression box at the end of the turn and will cause all players to loose (remove) an adaptation of that type from their animal next turn, unless it is one of their at-start (printed on their animal sheet) adaptations. There's also one space open for a player to place an AP and prevent one resource type from regressing.

Scoring VPs is crucial, obviously, but being able to execute a dominance card is usually *very* powerful.

New resources can be placed on the map form the Abundance row (up to 2 per turn), but those that go unplaced slide down into the Wasteland box and, eventually into the Depletion box, so while investing in adaptations to grubs (one of the resource types) might have been a good idea on turn 1, by turn 3 it could be a dead-end. If you end up with your population concentrated on a tile suddenly devoid of resources matching your adaptations, you could be facing a massive extinction. Worse, population eliminated through extinction or competition are gone for good, removed permanently from the game. There is always hope, though. Migration allows you to move your population to better tiles, and Speciation lets you spawn new population regardless of your current geographical concentration.

On top of all this, each animal has a unique advantage, a built-in adaptation to a different resource, a specific place in the "food chain" (used for breaking ties when scoring VPs), and a specific place in the starting initiative order (the reverse of the food chain order, in fact). This gives each animal a very different feel and goes a long way towards building the theme. The Dominance cards also feature several game-altering effects - from increasing/decreasing the number of APs a player (or players) may place each turn to catastrophic resource depletions and regressive diseases.

The system is brilliant, fascinating, thematic, and deep. I almost didn't pre-order this game, and what a sad error that would have been. After one play I think I'm in love with this game. The few down-sides I can see are mostly secondary; cost, length, learning curve. The intricate yet smooth gameplay is worth it. The rules themselves are not complex, but there are many interlocking systems and at least one stumbling block for new players, namely the two different types of control players are vying for in any given area. After a turn it becomes clear, as soon as a tile is scored and the first Dominance card is executed.

I currently rate this game a 9/10 after one play.

Ways this game is like Age of Empires III:
- Worker placement engine coupled with area control and direct conflict.
- Players must make strategic investments in areas of specialization.
- Exploration mechanism

Ways this game is like Twilight Imperium 3rd edition:
- Each faction has a unique feel and special ability
- Map is different each time via a set of terrain tiles
- Direct combat is lusty but limited 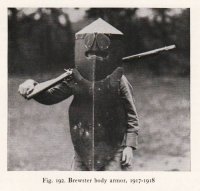 All regestered members may submit content to our site.
If you are interested in joining our team or becoming an associate or affiliate, please message us by clicking on the the red message icon below.
Discuss this article
Log in to comment
Posts in discussion: Age of Empires meets Twilight Imperium, with glaciation.