One of these games is not like the other game 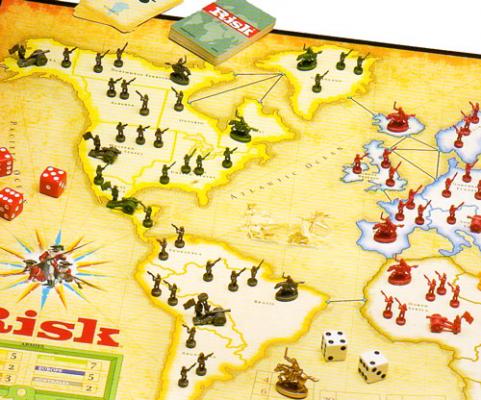 One of these games is not quite the same, as Elmo would have said.

I'm pretty young and haven't played many hobby games for long enough to be cynical and jaded, but I do recognise when I see a game that is pretty much the same as a game I already own. I also notice when a gaming session is being resented when a primary school friend of mine I've known from fifteen years is trying to convince me to watch a Jean Claude Van Damme movie on a laptop in the same room as his Dad watching TV just because his Dad is watching TV.

I've been playing Ninja Versus Ninja and Guillotine for a number of sessions - and my mate from primary is one of those people who gets sick of a game unless it's new, shiny, and doesn't interrupt his carefully constructed little world where watching things on TV is more important than, well, spending time with me. And this got me thinking just what it takes for a game to impress somebody long enough to hold their attention.

Even if I never paint the Assault on Black Reach figures, an important advantage over Dust: Tactics is the idea that the miniatures are indeed very distinct from each other and easy to tell apart compared to the generic souped up World War II clone soldiers in Dust: Tactics.

That's what really appeals to me in a game - a good game is distinct from another game not just in theme (two sci-fi games are allowed to have the same premise but utterly different approaches to that premise/genre) but in BEING ABLE TO TELL THE MINIATURES APART. Seriously, what is wrong with the unpainted minis for Dust: Tactics where I can't even tell one green plastic soldier from another, even in the facial details because the plastic used is too dark to see the finer points of the minis.

Now compare this to the idea that Magic: The Gathering, despite being a CCG, has clearly distinct characters/designs/theme for each of the forces in that block. What's more, the mythos to Magic: The Gathering is utterly different to the Warhammer Fantasy Battles art concept designs that came before. The cards are all the same size and shape but the difference between each of the designed creatures is very distinct from each other creature in the same game, and utterly unlike many generic fantasy art designs you see in stereotypical Frank Frazetta bastardisations of what was an original idea before.

And the best part of distinction between art design in a game is while a game like Gosu seems like Magic: The Gathering on first glance, the artwork and theme couldn't be more different from each other. Remember, it's not merely art design or game design that sets a board game product apart, it's the use of both in the production of a game that makes a game not only memorable but far easier to play.

Like Guillotine for example. I love this game even though some may think the game mechanic is derivative - it just conveys the idea in a very distinct way I've never seen before. Guillotine takes the concept of a simple card game where the end of the line equals your score and puts a chilling twist on it - you're not just collecting a card which has a score related value - that card represents a human life which you eventually acknowledge you have taken without any sense of remorse. In short, Guillotine turns you into Light Yagami from Death Note without any of the downsides of using a "real" Death Note from that anime universe where a person who uses the Death Note can't go to heaven for example. In fact it could be argued that like the Death Note's instructions in the anime, one can see that the rules are very simply stated and concrete. There is no ambiguity but that which lies in your own soul.

And I guess Ninja Versus Ninja is original in its own way too - it's a very simple cartoony Ninja concept with pre-painted minis, but you only get a certain amount of Ninjas per team and you have to use them wisely. It plays like a very streamlined version of Blood Bowl but in terms of getting a game happening on the table and fast, I'd take this over Blood Bowl for the same reason I don't think I'll paint my Assault on Black Reach minis any time soon.

Miniatures games have a time and a place for playing them, but the majority of board games only need a small amount of miniatures to have a sufficiently simple design. Risk has hundreds of miniatures but they don't need to be that detailed in order to be distinct representations of army types. Foot soldier, Cavalry, Cannon. Easy, and in ascending order. Risk I think is one of the simplest war games and one of the most complicated to learn the rules of. I still haven't learned how to play it in its purest form but it is what it is, and serves as a very basic world domination game.

The original Dust, on its surface, seems derivative of Risk but in some ways it is not. However Dust: Tactics has less of a right to exist than Dust in its original board game form does. Dust is world domination in an AU World War II setting with mecha weaponry, whereas Risk is the more default Napoleonic Era, if the box art of Risk hasn't lied to me many times.

I am not down on a game taking influence from another game and improving it, as long as it is a fun game. What I don't like however is if the design impedes comprehension of the game experience or utterly disappoints as a poor substitute for another game I already own. It has to bring new things to the table as well as old, time tested elements.