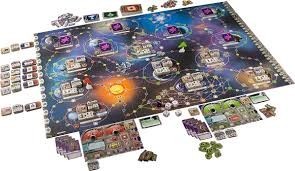 The interstellar ship settles onto the field that has become a make shift landing pad. Venting steam hisses into the morning air as it's landing gear auto adjust to bring the main body of the craft back to level. With a click and a whir a doorway irises open and a ramp descends to the ground.

The most intelligent men and women of this planet have come. Doctors, scientists, philosophers and artists.  They wish to be the first to make contact with a race of travelers from the distant reaches of space.

A hush falls over the crowd as the a visitor exits the ship and proceeds down the ramp. What new found knowledge will he bring? What  mysteries will he reveal? What great leaps forward will civilization take with the aliens help? They hold their breath in anticipation.

The visitor extends an arm like appendage and holds forth a gleaming object forged by technology far beyond any dreamed of by the natives. It shimmers in its miraculous perfection.

"Wha...what is it?" queries the boldest of the welcoming party.

The alien pauses and then speaks.

Three of the crowd do not join in the collective "oooohhh" of appreciation and wonder. They do not need to lessen the burden of dicing an onion. They need to play board games. It's F:AT Thursday.

The true believers numbered three this week. There was Josh, his lovely wife Lindsey, and myself. The game on the schedule was the recently reprinted Merchant of Venus. The new edition comes with both a classic version of the game and a modified version.  Josh was the teacher he opted for us to play the classic rules.

I played the Meepmeeps, I think. A race of highly evolved kitchen appliances whose goal was to become fabulously wealthy by bringing the benefits of Glorious Junk to the galaxy. I got lucky and acquired an ancient artifact that boosted my engines and allowed my lumbering freighter to make quick time between stops. I was able to accumulate the needed 2000 space bucks and take the win before Lindsey, who was close, and way before Josh who was flying the equivalent of a space wheel barrow between planets. He had neglected to upgrade his ship drives in anyway.

The game gets a lot of love in certain quarters but I had never played it before so I wasn't burdened with any nostalgic fondness or preconceptions. I found it to be a fairly standard "pick up and deliver" game with a very light exploration aspect and a space theme.  One thing it does have that most games of this ilk sorely lack is a bit of whimsey. The names of the goods, the flavor text for the different aliens you are delivering stuff to, it was all a bit light hearted.

That was for the good. Many games of this type take themselves far too seriously. As do the people that play them. Age of Steam being the prime example. One thing you don't hear is  a lot of laughing and cheering around a group of people playing Age of Steam. Audible bruxism, maybe, but giggling certainly not.

Merchant of Venus was fun and fairly simple. The fixed routes on the board, rather than player developed routes as is usual in these types of games, may give an undue advantage to a player who is overly familiar with them however after only one play I'm in no real position to opine with authority. Merchant retains the good parts of a train game with all the painful parts kept to a minimum.

Afterwards we had our usual bull session. Tonight's question was "What signature superhero move is the best?" Is it Spidey shooting a mask of webbing in someones face? Is it the X-men's Cannonball Special? Is it Aquaman's seahorse charge?

We came to a momentous decision. Let it be known that of all super hero signature moves, Batman's "Backwards Sucker Punch" is the best. You know the one where he's facing one way, a guy comes up to get him from behind, and Batman without turning punches him in the face. Don't argue....it's official.