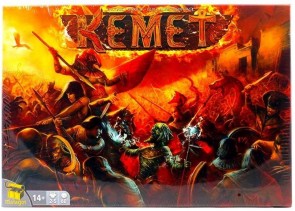 Game Name
Kemet
Publisher
Matagot
There Will Be Games

The adopted prince, and one-day prophet, stands covered in the dust of the construction site. Sweat rolls over his furrowed brow as he watches his people struggle to move the massive blocks before them.

An older man clad in rich fabrics and adorned with rings and bands of gold stands behind the prince. His nearby guards eye the workers warily. They know, if the king does not, that they are not loved.

"Pharaoh is pleased?" asks the prince as he sweeps his arm wide indicating the scene of incredible labor.

"Yes," replies the king, "but not with certain accusations made against you."

"You removed all randomness?" the king accuses.

"Yes." replies the prince without shame.

"You gave each their own player board so they wouldn't have to interact?"

"Yes." with a hint of defiance.

"You gave them a catch up mechanism so that nobody would feel bad for doing poorly?" says the king wanting to disbelieve.

"Yes." This through gritted teeth.

"You did all this to gain their favor?" demands the king his anger beginning to rise as well.

The prince spins to face his surrogate father directly and looks him in the eye.

"A city is made of cubes, Pharaoh. The strong push many. The weak push few. The dead push none! So much for accusations."

Spring is almost here and with it the feasts and festivals we partake in to celebrate our release from the bonds of winter. Bunnies are laying eggs, bread is being unleavened, goat legged flute players are seducing drunken virgins in the hills of Greece and a contingent of sad lonely women prowl the deserted "Wicca" section of the Borders Book Store pining for acceptance.

It is appropriate then, that the game of choice for this F:AT Thursday would be the new game called Kemet.  A game of kicking ass and taking names in land of ancient Egypt. (You see the connection between Passover and Egypt right? If not I suggest you spend less time working and going outside and more time on wikipedia)

Anyway, let me tell you a little about this game. First, this is not Khet! A confusingly similar title for a game with laser beams and mirrors that has an Egyptian theme that is about as thin as..as thin as....oh I dunno something really really not fat.

It is this similarity in names that made Uba and me both kind of shrug and dismiss the new game thinking it was the old. It is not. In fact, it is something altogether different.

It is made by a company called Matagot, who you may recall produced the modern day classic Cyclades several years ago. Kemet is being marketed as a "companion" game to Cyclades and that is appropriate. They are distinctly different games but they have similarities and share the same design goals. Specifically, fast cut throat action with several paths to accomplish the victory conditions.

The production is fabulous. Each faction has it's own sculpted minis. There are mythical allies you can acquire that have ridiculously awesome pre-washed sculpts that are cool as hell. For example there is a tiny dude waving his spear as he sits in his saddle atop the giant fucking snake he is riding! Re-read that sentence, I'll wait.....

Yah, that's what I'm talking about.

Add in tokens that could have been made of cardboard but are instead plastic embossed with scarab symbols and a money token that is an ankh. Pyramids that instead of being lame are instead these HUGE four sided die. And the board while not mind blowing is pretty cool too.

Like it's older brother, Kemet's rules are pretty simple and straight forward and we were up and playing inside of a half hour including the set up time and rules read. After one turn, everything we were mildly confused on made perfect sense.

The game does away with any bidding which is one of my favorite aspects of  Cyclades but adds in "tech" of a sort that you can develop and purchase over the coarse of the game. So that makes up for it.

I won't go into a detail of the rules or anything of that nature but the game was just plain fun. The choices made seemed like they were important and the game gives that feeling of wanting to do one or two things more than you can on a turn. The hard limit on army units (12) really felt painful at times as you never seem to have enough dudes.

As I mentioned previously, the game was fast and bloody. In some games fighting is discouraged because the cost of failure can be brutal and crippling. Not so here. You want to win the fights but losing is more of a slap to the face than a lead pipe to the knee.

We only had three players, as Josh Look was suffering from a sniffle or some other mamby pamby-ism and couldn't make it, and this is the kind of game where I think the more players the better. Even so, it was fun and tense and I'm sure we'll be playing it again soon.

Talk of Stuff was centered on the game itself mostly, what we liked and didn't, but I still got in my requisite amount of bitching and moaning. Specifically over how much it sucks to sell stuff on ebay. God, what a drag.

Such a great and useful idea that has turned to complete shit over the years. Why back in my day we didn't have the intrawebs....blah blah blah blah....and you kids...get offa my lawn!