Relic: talisman of the new 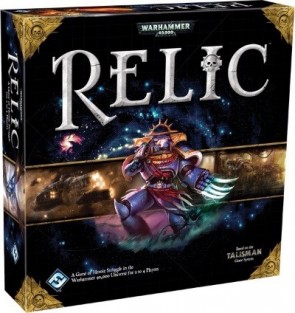 I probably wasn't going to get it at $60, since I've grown averse to roll-and-move games. I'm fine with Runebound, because you can move in more than two directions and adding one deck of cards can radically change how the game is played, while any of the large expansions do so, as well, rather than just adding on to the main game a la Talisman.

Caveat: As I've mentioned several times before, I owned a full set of 2nd Ed. Talisman and played it to death. I loved it, but I wasn't willing to fully reinvest in FFG's 4th Ed. because I'm already fully loaded with what I think is the superior Runebound.

That said, I was a 40K player for many years and that background has far more appeal to me than the generic fantasy of Talisman, so I was at least looking at Relic. My FLGS (Vault of Midnight in Ann Arbor, MI) announced that they were having a sale this weekend and, at 20% off, I figured I'd snag it.

It largely remains the Talisman system in terms of stats (Strength, Willpower, Cunning, Life) and combat (roll a die, add the appropriate stat, equal or more to win for the player.) However, the addition of dice "exploding" on a six (akin to Chaos in the Old World's mechanic) and Power cards being able to be used for either their ability or to replace a die roll (for movement, combat, or skill tests) makes the system much more versatile (I know the Luck attribute in Talisman now functions similarly.) I was notorious in my old Talisman games for being able to produce just the right die roll to let me walk right to the space of a player having just been turned into a Toad and help myself to all of their items. But I don't even have to depend on that kind of real luck with a Power card or two. I can just discard it and go. However, their abilities, like outright doubling a stat until the end of your turn or moving an enemy you want to confront to your space, are really useful, as well.

The Corruption system, where you accumulate cards that can eventually knock you out of the game, but also occasionally generate really useful abilities (and some detrimental ones) also really generates replayability and makes distinctions between characters in each game.

Speaking of which, the 10 characters (Commissar, Ogryn, Ratling Sniper, Callidus Assassin, Rogue Trader, Tech-Priest Enginseer, Ordo Malleus Inquisitor, Sanctioned Psyker, Canoness, and Ultramarines Captain) not only drip with 40K lore and have their own unique special abilities and different stats like Talisman characters, but they also each have a unique level reward system, so you'll be gaining mostly stat increases with one character or regular Power cards and Influence bonuses with another. That means each character will play completely differently from another. That's HUGE to me. It's not just "You're safe in the Crags" and your Strength is one point different from the guy next to you. Your leveling experience will be different. I really like that.

The Threat decks run the gamut from Gretchin and Hormagaunts up to Eldar Avatars and Bloodthirsters. Many of them are pretty straightforward (you just have to beat their stats) but there's a decent mix of special abilities to deal with or conditions created by locations and so on. There's also a good mix of events and encounters mixed into the decks (in true Talisman and Runebound fashion) so that you're not just fighting an endless stream of enemies (even if in the grim nightmare of the far future, there is only war...)

There are Missions which eventually give you access to the requisite relics that allow you access to the top tier and victory (I know that recent expansions for Talisman have also emphasized this approach) and the top tier plays out much like Talisman does, with spaces that you must encounter and endure in order to reach the top. Thankfully, Relic already comes with 5 different endings, so there's variety already built in.

The one major aspect of Talisman that Relic is missing is PvP (I was/am notorious (some would say "infamous") for ignoring the typical method of victory and simply gearing up and killing my opponents in Talisman/Runebound.) All of the characters and, thus, the players are serving the cause of the Imperium against Chaos, Orks, Eldar, and Tyranids, so player contact is limited to stealing gear or Influence from each other at various times. However, there's a note in the rulebook that they have "big plans for the future" (grim future?) and plan to add more PvP play in coming expansions (FFG? No!)

The only real downside of Relic is a physical one: there are four colors used to identify player bases and character stat boards. The bases that insert into the bottom of the busts that show which character you're playing are AWFUL. The busts are cool and nicely detailed, but trying to jam those bases into them is next to impossible for the majority. I'm going to have to get a knife and grind out the aperture for most of them.

Anyway, I think Relic is a very worthwhile pickup for fans of Talisman and Runebound and those interested in beer-and-pretzels games. It's not nearly the mind-blowing design of CitOW or the surprising depth of Blood Bowl: Team Manager, but it's not meant to be and I think it fills its role well (especially at 20% off!)