Analogue gamer finally grokks digital? #1. In which I neither got nor 'get' computer games

My sorry excuse for a computer game collection …

I noted the paucity of my digital gaming experience last September in my review of Death Ray Manta. Getting a bit more precise: as far as I can remember I’ve only ever owned 5 or 6 computer games, and only 5 which I can remember for sure:-

Of all of these I still own the wargames.

I’d say I really can’t understand why I’ve had so little interest in the most important gaming medium of our times but I can’t, because I do know why. And it’s nothing to do with not liking the games as such. I mean to say, I can still remember my first game of CCIII: The Russian Front. I played the Germans, naturally enough.

Ooh look I thought, I’ve got a StuG III! So I sent it roaring along the northern road towards the farmhouse just west of the northern river objective. The next thing I knew, “Krak! Clang!” followed by sounds of fear and panic, which did not sound good to me. Sure enough, my rashly advancing unsupported AFV had been KOed by a Soviet 45mm AT gun. That moment of utter dread stands out as a peak gaming experience because of the immersion CCIII:TRF offers thanks to the AI and the sound effects. I was entranced; and trounced (the only sensible decision I made in that game was to flee).

The "when ah were a lad" factor

One dimension of this gulf between me and digital gaming is sheer historical accident. I can still remember the arrival of Home Pong back in the mid-70s. Sadly, my parents never bought one despite all our entreaties so I only played it a few times on other people’s consoles. I was likewise able to play only once or twice with the Magnavox Odyssey which was the first home console with a light gun. I was amazed, naturally enough. Zap guns for wargames! I'd been dreaming of such things for years, since my days of 'Japs and commandos' (ahem!) as a kid. 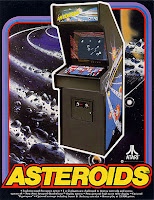 The advent of arcades meant that I spent as much money as I could afford during late school and early university years playing early classics like Space Invaders,  Asteroids and Defender; all rather badly I must confess, and not as often as I might’ve liked because I had a gamer geek’s hobby to support too. But — and this is a big but — I never had a ZX Spectrum; was without a decent PC until the late 90s; and have never owned a gaming console. So the rise of digital gaming passed me by because I couldn’t afford to buy in (I had other priorities, as noted) and, when I could afford to buy in, I was too deeply entrenched in my analogue habits to exploit the opportunities offered by my new hardware.

And these habits are very deeply entrenched. For example I bought the Deep Space Bundle in a Box I’d previewed with my review of Death Ray Manta, so I now have 8 retro arcade shooters I could play in idle moments at the computer (and there have been plenty of those in the past 7 months as you can imagine dear readers). Have I? Of course not. I’ve played CCIII:TRF a couple times recently because, a game I’ve come back to now and again down the years, it was the first game I thought of when I was thinking about playing more computer games. I retreated in confusion again after the first turn of an attempted Operation. I’m convinced that this is part of where my mind just doesn’t work the way a computer gamer’s mind does.

To reiterate: this isn’t a matter of not liking solitaire gaming as such- I soloed a lot of games of SL/ASL and Up Front back in the 80s, when I also played my way through all the Ambush scenarios. I don’t solo boardgames these days because Badger’s given me a regular FtF opponent sufficient to scratch my tactical wargaming itch. So it's my underlying aversion to computer games which has kept me from their realm for so long, and I can sum that up very easily as: the difference between learn and do- the analogue games' skill set; and do and learn- the digital skills set. The analogue skills set is one in which I feel very at home; the digital contrariwise, is one I have found quite strangely alien, a peculiar and hostile environment I can sum up with my frustrated cry, "Where are the rules?". ;)

- 'Death Ray Manta': indie, still psychedelic after all these years