F:AT Thursday: Ticket to Ride, Combat Commander and Doctor Who 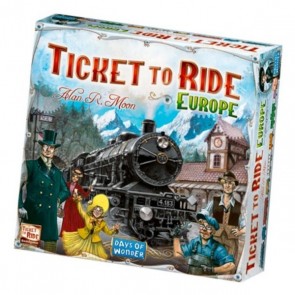 "This isn't right. This doesn't seem right." The True Believer turns in a slow pirouette taking in the unfamiliar surroundings. "My calculations were exact. I double and triple checked them. Yet this is not right. Where are we?" Ok, Captain History! I guess technically you are correct but we call it that because our own dear Engineer Al is blessed with a few weeks off of work every summer while school is out. Now Uba, his adoring wife, seems to think that this time should be used to do chores and needed work in their home and she is right. However, I feel that Al should not squander the entire summer being responsible so I appeal to his hippie nature by calling it the Summer of Love and tempting him with nonproductive activities like drinking beers or teaching me to play disc golf, or (you guessed it) board gaming.

So I repeat...The Summer of Love is in full swing.

Things for all of us True Believers are in a state of flux. I have had to take on a lot more hours at work to keep the company afloat and my mad scientist wife and I have recently moved from a house we rented to a much smaller (and cheaper) apartment, Engineer Al and Uba's trials and tribulations with getting their own home rebuilt after last fall's fire are the stuff of legend, horrible horrible legend and Josh has been going through some of his own life changing experiences at work and at home. (Good stuff mostly but still stressful and time consuming).

This has meant that while the F:AT Thursday tradition remains strong the attendance and location have been more indeterminate than  in the past.  We have been to the Lake House, we have been at The Club, we have been to Josh's country estate and we have even played in the game room at my new apartment (the 2nd bedroom).

If you live in, or have visited the North East in the last month or so you know that it has been hot. Hot! HOT!! But because this is New England, we are not satisfied with the heat, we need humidity born of the darkest heart of the Amazon to go with it. It has been just suffocatingly brutal outside.

In response, I turned up the central air in my apartment as high as I could go without my wife filing for divorce. So the last week when we played there, rather than perspiring so much that it looked like I had sprung a leak....from my head....where sweat came out...and dripped on everything, we almost had to put on our winter coats and mittens. It was glorious.

So what did we play?

Well, we actually got my wife Peg to play a few games with us. She isn't really into games but if they are "cute" (her word not mine) she will sometimes agree to play. She does like Ticket to Ride, so that is what we played first.

Oh I hear the groans of dismay from the upper crust. "Ticket to Ride?" they whine in that condescending way, "That's a gateway game! You're supposed to be hard core, Mr. Repoman. What gives?"

And while they stand around back slapping each other and lighting cigars in celebration of being "real" gamers, I will reply that I like Ticket to Ride! It's fun and it's social. It isn't the deepest or hardest or most fulfilling game ever but I have a good time when I play it. And that, my friends is the ultimate aim of gaming in general. To have fun. Uba or Al won, I can't remember. I chock it up to being a gracious host and wanting my guests to feel good about themselves...or it could be that I just suck at games.

Then we played a game of Tales of the Arabian Nights. Naturally this was a good time. I've said it before but Uba's expedited victory conditions keep the game right in the time frame where it belongs. Peggy is a little leery of public speaking and especially of reading aloud but once she realized that if she didn't want to read she didn't have to, she began to enjoy the silliness of the game. Again, I forget who won, might even have been me.

In preparation for my upcoming trip to the World Boardgaming Championships in Lancaster, PA, I have been trying to get in as many games of Combat Commander as possible. I plan on entering the tournament and while I have no illusions that I will bring home the coveted wood plaque and forever bathe in glory, I do, at least, want to be as familiar with the rules as possible so as to not seem a complete noob.

I could tell you that these games have improved my skills but an examination of the results would make a liar of me. Its funny that when I was first introduced to the game by my English friend Matt (not Thrower), I was very luke warm about it. However, upon rediscovering it several months ago, I've become really a big fan. Just goes to show how first impressions can be wrong and game opinions are never set in stone.

Combat Commander may not be the most deep or rich game of squad level combat but I do think it is the most fun. In my last game, Kevin the Nemesis, was advancing his Germans up a hill in order to take the chateau where my American's sat waiting with their .50 cal machine gun. Kevin, being a big wet blanket, refused to charge willy-nilly into my killing ground and instead had them stage just below the ridge line of the hill out my line of sight. Yes, I agree...very cowardly! Well while this kept them from being cut to ribbons it did bunch them all together.

Aha! A perfect time to call in an artillery strike! The spotting round landed right in the middle of his infantry! Now was the time. I was going to bring the thunder! Death would rain down upon him. I pulled the card for the combat "roll" and it was....a 2!!!! C'mon! Are you serial?! "Yes", laughed fickle fate, "I am totally serial!"

So rather than getting a face full of 105mm shell casing, the German's were treated to the snap of a Christmas Cracker and everyone got paper hats. Filled with glee, they subsequently laid down some smoke, advanced upon the house, and forcibly evicted my Americans. I lost the game by two victory points.

Travel with me my friends, to a time long past. A time where a boy could turn on his black and white TV and through careful manipulation of the rabbit ears manage to receive the signal of a far away PBS station. The boy could then, of an evening, watch the static laden episodes of the most remarkable show. A show called Doctor Who.

This was how I discovered Doctor Who. A show that neither I or anyone I knew had ever heard of. A show of time travel and adventure. Horrible monsters and daring escapes. An odd fellow in a long scarf  and the beautiful "girl next door" that traveled with him. This show hit me at just the right time of early adolescence. The hokey special effects, the terrible monster suits, the less than great acting...none of that mattered...it was the idea...the stories...I LOVED it!

I have recently been watching those classic episodes of the Tom Baker era. The Ark in Space and The Genesis of the Daleks specifically. I am happy to say that they are still a bucket full of fun. Tom Baker will always be THE Doctor too me. Alternately goofy, serious, cold, caring, unflappable, and very rarely angry. And Sarah Jane...oh Sarah Jane...well we always remember our first love don't we?

Such a shame I can't get into the modern series. I want to. Really I do but for some reason I can't. To be fair I have watched only the first season and a couple of episodes of the second.  Maybe it has to do with farting aliens or maybe it has to do with Rose and her boyfriend, or maybe it has to do with the Doctor himself. Baker was able to convey the kookiness, the aloofness, the compassion, and occasional the anger and stubbornness of The Doctor all with charm and ease. You wanted to go on adventures with that doctor. The new one seems less warm. Perhaps another example of "the darkening" of heroes that was seen in comics in the 80's.

"Well Mr. Hardy McHardcore," you snort as you lean back in your pleather easy chair and  swirl your snifter of what you would have us believe to be cognac but is actually Hires Cream Soda, "If you had but gone a bit deeper into the new series you would find that it gets much better."

That may very well be true and maybe I'll give it another shot. In the future.