In Praise of X-Wing 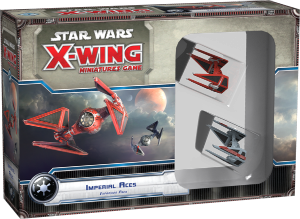 You've probably heard about the new TIE interceptor box sets that are upcoming from Fantasy Flight. If you have, you've probably also heard about the inevitable nerd rage that's accompanying the announcement. How dare Fantasy Flight release a new box set of repackaged old material! How dare they do again what they've done with most of their expansions and "second edition" games over the years! How dare they attempt to make money from an expensive licence!

I have a confession to make: I don't actually play X-Wing all that much. I'm not even certain that it's a particularly outstanding game. A lot of it comes down to pre-game builds and second-guessing what maneuvers and actions your opponent is going to choose.  It's a lot of fun though, seeing all those ships swooping about and rolling the dice while humming the Star Wars theme tune, and that's what matters.

But while I don't play it all that much, I keep on buying the models. I'm not, generally, a collector of things for the sake of collecting, but I make an exception for X-Wing. I want to own one of everything. More in some cases. I want to own it purely because each little model is so lovely in its own right, a beautiful little construct that it gives me pleasure to sit and admire.

This is X-Wing's great coup, and why I have no interest in the Star Trek version, Attack Wing. The latter might have a better game system, and it might have a better universe - I'd rather watch Wrath of Khan than A New Hope any day. But the battle sequences in Trek are often afterthoughts in the plot, not the iconic centerpieces that they are in Star Wars. And the Attack Wing ships look bland and boring, and whether they are actually to scale or not (I couldn't care less) it simply looks wrong to reduce such ponderous starships to such tiny models with super maneuverability. Whereas X-Wing looks amazing and the play feels just right.

X-Wing taught us, taught everybody that style matters, that pieces matter, that plastic matters. Watch all the people who extolled the austere virtues of collecting wooden cubes and phallic authority figures lust and drool with the rest of us over the little rebel fighters. It should come as no surprise: the physical component of board gaming is a key part of its appeal, part of what ensures its popularity in the video game age. How much better is it to hold aloft a vanquished TIE fighter in a frenzied victory chant than simply watch a virtual one vapourise on an LCD?

So I'll be getting the box set of Interceptors, regardless of the pilots, because they're wonderful things in their own right. If you don't like it, don't buy it. If you own a bunch of Interceptors already (I don't), just pirate the cards or sell the models - demand is still outstripping supply. If, like me, you enjoy the game but not the over-bloating of equipment and pilot options just use the figures and feast your eyes. I'd far rather they did this over and over than pulled some obscure rubbish from some obscure branch of the extended Star Wars universe for a "Wave 4" of all new material. I want to game Star Wars the way I remember it from the films.

So put your nerd rage away.  It's like a botched but functional DIY project: something that's precious to you but that no-one else wants to see in public. Put it away and rejoice in the fact that X-Wing made board game miniatures something special again.