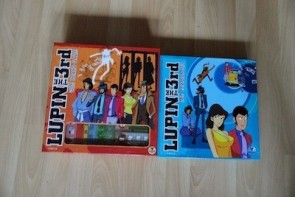 Hard to tell how big an impact childhood TV shows actually have, but I remember a few of them very well. There was Robbi, Tobi en het Frawatuig, De Stratemaker op Zee-Show and later Inspector Gadget. The impact on Pierluigi Frumusa must have been the same for Lupin III, a Japanese cartoon series about the grandson of Arsène Lupin, the French 19th century equivalent of Robin Hood.

Lupin III and his gang, consisting of gun toting Jigen, modern samurai Goemon and vamp/action woman Fujiko, are always intent on pulling off great and improbable heists. At the same time they are pursued by gruff inspector Zenigata, who by force of the plot must always fail.

This gives the game a natural set up of a match between the gang players and the inspector. But the gang contains one weak joint: Fujiko. She has her own agenda and might in some cases decide to keep the prize to herself. The possibility of a three-way stand off gives the game an edge over many other coop games.

The theme is further integrated into the gameplay as all the characters have unique stats and a set of mission cards, which give you different options (like Lupin's penchant for disguises and Fujiko's betrayal). This reinforced by the excellent graphic design and the inclusion of five plastic figures of the main characters is a bonus.

Every game is based on a scenario, drawn from the cartoon series. The original game includes a double sided board for the first two scenarios, the expansion two more. Every scenario comes with a few specific rules as well.

Another feature of the game is that it includes a planning phase, in which the gang decides on the way to execute the heist. They have a limited budget with which to buy equipment, from shovels to guns to paragliders.

Finally there's the limited visibility. As long as they are not in sight, the gang are not on the board, which is why Inspector Zenigata has a challenge on his hands setting up his policemen at the start of the game.

Together, the heist scenarios, planning phase, hidden movement and conflicting goals of the players with unexpected twists in the execution phase make the game feel very much like the cartoon original. I think that´s a major achievement for a designer.

So, what's not to like about Lupin the 3rd, a good looking game dripping with theme and some interesting and rare mechanics? As in other cases (Gen-X, I'm looking at you here) English rules written by non-native speakers are not the easiest to digest. A combination of weak translation and sloppy rules writing leaves considerable gaps and confusion that players need to sort out during the game. Luckily there´s a revised English rulebook and a FAQ to provide some help.

As one of my friends said: rather than not playtesting it enough, they have probably playtested it too much and forgotten how much is assumed in the rules that we're not told about. 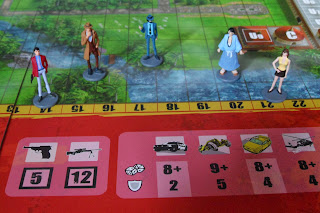 The visibility issues also can become problematic, which is why I think playing with an umpire is a good idea, especially when introducing players to the game. Does that diminish the game? I think not. But then I am used to half finished games where umpires and players work with the mechanics and role play rather than try to break it. If you are up for a unique game, brimming with theme, don't let these glitches stop you.