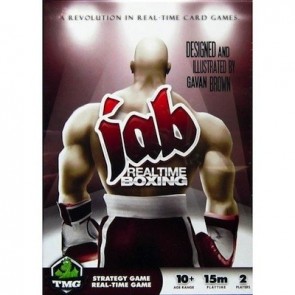 There Will Be Games
“Two hits, me hitting you, you hitting the floor.” – Emilio Estevez, The Breakfast Club

JAB is an eye-gouging, fish-hooking, throw down punch to the gut that knocks the wind out of you while keeping a broad smile firmly plastered to your bruised face. It’s a hectic stress inducing 20 minute game of real-time action where you can beat the hell out of your gaming buds. Slap a very modest price tag on the box and you have a package that should be in every gamer’s collection.

Real-time games have been taking the board gaming scene by storm the last few years with such excellent titles as Wok-Star, Escape: Curse of the Temple, and the classic Space Alert. For the uninitiated, JAB: Realtime Boxing would make a perfect introduction to the format. It’s a game that not only requires speed but cunning and swag as well.

“I’m going to float like a butterfly, and sting like a bee. AH! Rumble, young man rumble! AH!” – Mohammed Ali

This version of cardboard pugilism has contestants playing cards that represent punches onto their opponent’s body. Akin to a gunslinger quick-drawing a Colt Peacemaker, you must hurriedly play the top card from a pile associated with either your left or right hand. Targeting the unlucky sap’s head, right or left side – the goal is to spread hits out in a strategic fashion.

Your weapons are Haymakers, Hooks, Uppercuts, Crosses, and Jabs in one of five colors. You can play a card of the same name or the same color on top of your opponent’s played card in order to perform a block (pro tip: block like crazy; rope a dope is for the birds). If you have a certain sequence of punches showing on your target’s body you can call out a combo. Counter-punches can be claimed if a specific pattern crops up in combination between a punch played on your foe and one played on yourself. That’s the majority of the game, managing your offensive punches with blocks while working in the ever powerful combo and the occasional counter-punch. Victory is accomplished by taking 3 rounds or KO’ing the other poor bastard.

What makes JAB so goddamn fun is the combination of speed with tough decisions. You have to be mindful of the guy across the table while also deciding which punch card to play, where to play it, and what combos/counter-punches are eligible. Tactics and maneuvers require multiple steps and the setup can be thwarted by superior awareness. The dance is fragile yet pulse pounding as you hurry through your deck and try to set the tempo. This varying pace and swirling table dynamic make for a deep skill progression that rewards dedication.

Despite the unbridled enthusiasm, it’s important to recognize a couple of hurdles one must mount before strapping on the mitts. The first issue, shared with its fresh brother Escape: Curse of the Temple, is that playing this game over and over in rapid succession can become tiresome. The experience is much better savored only occasionally and played in short bursts when you’re looking for a crazy filler to rock your socks. The short time period can make repeated play in a compressed time span sort of blend together into this forgettable whole. I don’t attribute this as a weakness of the design, but rather a limitation of the space for this type of game.

The other problem area is the undeniable fact this game does not play well with disparate skill levels. A veteran will beat down a rookie with no remorse like Sugar Ray Robinson pummeling Sheldon Cooper into quantum particles. You can attempt to take it easy while teaching a newcomer, but it can suck the fun out of an intense sparring match when you’re held down by training wheels and ankle weights.

If pulse pounding paper-cut inducing real-time game play intrigues you, do not hesitate to throw this game into your next order. The flaws can be overcome and the payoff is sweeter than the end of Rocky Balboa’s debut. Suck it up, strap on the gloves, and recruit your 4 year old to be your cut man.

“My style is impetuous, my defense is impregnable, and I’m just ferocious; I want your heart. I want to eat his children. Praise be to Allah!” – Mike Tyson
There Will Be Games

Discuss this article
Log in to comment
Posts in discussion: Head-Body-Heady-Body; One Pummelled Man's Take on JAB: Realtime Boxing