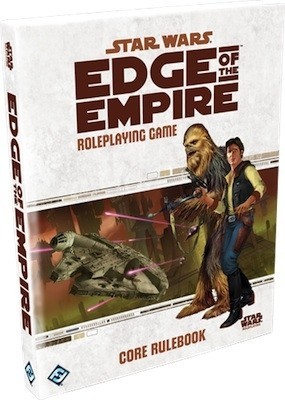 I’ve played a few sessions now of the FFG Star Wars Edge of the Empire RPG and feel ready to stick my thoughts on it to the FAT. I’ll also talk a bit about Warhammer Fantasy RPG 3rd ed at the end to since it shares many mechanics.

There are two clever things this RPG does, first is its custom dice system, and second is the characters obligations. The rest of the game is pretty solid, but it’s fairly standard fare in the world of RPGs. There is another question to look at before this stuff though, does it do Star Wars?

Yeah it does do Star Wars, but a specific part of it. FFG have rather wisely split their game into three books, this first book just deals with Han Solo type stories. You’re a bounty hunter, or a smuggler etc and you fly around space with a crew (the other players) and basically play Traveller. I like Traveller, and Star Wars flavoured Traveller does work well even if it does feel a little bit like games I’ve played before rather than explicitly Star Wars.

The dice system is designed by Jason Little of Blood Bowl Team Manager fame. He designed the original system for WFRP 3rd edition, but FFG have realised how good it is, and will now probably use a variant of it in every rpg they put out. Essentially there are a good half dozen or so different custom dice of D6 through to D12 form covered in symbols. When a player, or the GM wishes to resolve an action they pick up a number of dice equivalent to their skill/characteristic and a number of darker coloured d8s equivalent to the difficult of the challenge, 1 die = easy, 2 average, 3 hard. You then roll them all and count the symbols. The beauty of this system is that it pulls a lot of weight for the GM and players and promotes story telling. It is easy to play because there are no odds calculations or arithmetic. The GM just tells you how many difficulty dice, you check your stats and you’re ready to go. On top of this, you can spend some tokens from a central pool to either upgrade dice to better ones, or add bonus dice, so there are some tactics there too.

It encourages story telling with the symbols on the dice. There are two symbols (there is a third but it’s just a fancy exception) on each die. On the difficulty dice, there are failures and disadvantages, on the player dice there are successes and advantages. Once you’ve rolled if you have more successes than failures you do what you wanted, nothing new here. The advantage disadvantage balance is the interesting mechanic. To give an example, my Rhodian technician sucks at negotiation. He was trying to threaten a pair of mercs in a canteena so he pulled out his grenade and waved it at them making his demands. I rolled a net 2 successes with a 3 disadvantages.  So I succeed in threatening them, but something bad happens, I accidently drop the grenade with the pin falling out. Within seconds everyone in this canteena has either bailed over the balcony or is booking it for the door. The dice force you to imagine.

The downside to the system is that its overkill for spot checks or agility checks. Sometimes in an RPG you want a quick pass or fail, this system always gives you more detail, and sometimes you don’t need it. I’ll cover this more later on in WFRP, because it sucks for dungeoncrawls.  The other issue, at least initially, is you have to learn what the symbols mean.  The fate system, and the Burning Wheel dice pool mechanic both predate the FFG system and are more powerful, but they aren’t as simple and accessible to use.

Obligations are the second clever thing. Each character will be generated with at least one obligation. It could be a debt to pay off, or a bounty hunter chasing you, or a problem with the family. At the start of each session the GM will secretly roll a d100 and see if one of the players obligations activates for this session, if it does he HAS to build that obligation into the session. So maybe  mid-flight a bounty hunter gets a lock on your ship and starts making demands of one of your crew mates. Each player’s obligations are secret so the other players are initially taken by surprise. I like games where the game rules reach into the game and force imagination in directions the players and GMs wouldn’t normally go.

As for the rest of the game, from a brief reading of the book it does look a little sparse on stuff for an RPG in a set universe. Most mid-school universe in a book type rpgs are loaded with stats and details for planets, weapons, ships, spells etc, in a game where the party fly around in a ship we had a choice of four.  There's also a fairly limited number of playable races (7 or 8 I think), which might be a smart game design move, but for people who want Star Wars it is a little constraining.

A common problem in games where you have a spaceship is money balance. Trading and ship based missions need to pay reasonably well so the ship can be maintained/upgraded but it’s easy to over pay the players and see them all buying thermal detonators.  The game only seems to have vague advice on this rather than some actual numbers.

The other problem to cross over from Traveller is that spaceship combat sort of sucks. For me, spaceship combat generally sucks in rpgs. It boils down to one player, the pilot, making interesting choices and everyone else just rolling to hit dice on repeat.  The dice system does make this more tolerable, the ship to ship combat should still be short.

Generally I don’t like playing RPGs in popular IPs. I prefer to have more limitless invent your own worlds type games, but most people I know like to replay their favourite tv shows instead. Despite this taste I have enjoyed Edge of the Empire. If you want Star Wars Traveller it’s a good game.

Some brief comments on WFRP 3rd ed. Interestingly FFG went for the older RPG in a box model for this one so you get the books, some dice and a tonne of cards. Yeah FFG off load a lot of the character skills onto cards that you slot in and then tap to use. It’s a good game, with many of the pluses and minus of the dice system mentioned above but with more complexity and tactical decisions. The issues become more apparent though. The custom dice are great for detailed narrated combats or feats of skills but for simple is there or isn’t there a trap checks, or dodge the falling tree there are only so many times you want to add detail to the situation. For this reason I think it makes a bad dungeon crawler. One mechanic I do like is the party status. You choose a party card which defines the type of party you are. We chose something like band of reckless young men (it was over a month ago, so the wording escapes me). It changed the dice available to the party to make the risk/rewards higher and influenced the cards we could use too. I like the idea of having a statement about what your party is about and seeing it reflected in the game.

Everything in the line is in FFGs current Christmas sale at 60% off or more so if you’re in the market for a story telling, rather than simulational RPG it’s worth the price. Personally I’ve wildly swung away from this kind of narrative type RPG with Dungeoncrawl Classics but I still think it’s a solid game.