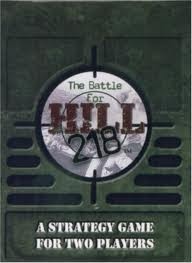 Wrapped in a plain olive card box while boasting black and white generic card art, The Battle for Hill 218 bears an outright semblance of the mundane that will be torn down and trodden upon as soon as you get this beauty to the table. While the idea of spilling blood and throwing waves of troops against the torn hill depicted on a card as a 2D muted brown line rendering sounds insane, you will be hovering on the edge of your seat as the tension boils higher than a sleeved Race for the Galaxy draw deck.

At its heart, Hill 218 is a clever abstract card game where you attempt to outmaneuver your opponent by controlling the area surrounding the hill at the center of the table. On your turn you may place two cards from your hand onto the play area, one at a time. The cards are organized in play into an invisible grid with the hill at its heart. The first card you place must be directly behind Hill 218 on your side of the table. From there your units spread like gangly arms attempting to choke the life out of the Fascist pig sitting across from you.

The intensity comes from the delicate tempo as you and your opponent joust for momentum. Calling in a well-timed Air Strike or executing a devastating Para-drop behind your opponent’s Heavy Weapons can turn the tide of the game and have your enemy’s flank collapse in on itself as he flounders among his dying brethren. The ingenuity of this momentum struggle arises due to the simple yet effective Supply rules.

Each card has a Supply graphic which dictates where it must trace Supply from. Every card except for Paratroopers and Air Strike requires Supply be traced from its location back to your Base. This greatly restrains your placement of cards so that you must build this chain of linked units that attempts to advance and wrap around the fulcrum of the hill. The depth is greatly achieved due to the variety in ways units trace Supply, as well as the susceptibility of your link being severed due to an opponent’s attack. The battle of momentum at the heart of Hill 218 is this vying for space while maintaining your own Supply and crippling your enemy’s. While Supply is the most crucial stat on your units, Attack and Support must be utilized to their utmost if you wish to win the jousting match. The attack graphic represents what spaces are able to be attacked when the unit is placed. Most units show a cross-hair in the target spaces which denotes that they kill an enemy in that space only if the attack is Supported by a friendly unit already on the table. Units grant Support to spaces denoted on the card under the appropriate icon. Some units automatically kill their targets regardless of Support (Artillery and Tanks) and act as an ace in the hole of sorts. Finally, Air Strikes (each side has 2 available) automatically kill a single unit anywhere on the table.

While the myriad options present in the variations of Supply/Attack/Support among units are enough to provide great replayability in and of itself, the fact that your choices are constrained to what you currently have in your hand increases the importance of careful placement ten-fold. Careful thought must also be given to what has already been played and what units you have yet to draw as the quantities are limited. These factors combine to provide an astounding amount of depth for a 15 minute card game that offers a gentle yet nearly endless learning curve.

The popularity of this game cannot be denied as it recently received a top-notch iPad port and has torn through several print runs in the past few years. The iPad version of the game is a phenomenal implementation and features a strong AI system built off the long-standing Java version of Hill 218. In digital form the game costs less than a gallon of gas and the old-school cardboard version our grand-parents used to play can even be acquired with the cash that the poor dude sloppily throwing together your Whopper Junior earns in an hour. You have no excuse not to own this underrated classic and it has stood the test of time in my turbulent collection which sees just as many games going out as coming in.

Discuss this article
Log in to comment
Posts in discussion: Heavy Punch In A Small Package - The Battle for Hill 218 Review