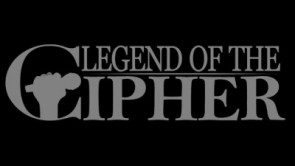 What do you get when you slam together Dominion and The Chronic?  The best damn game you’ve never heard of: Legend of the Cipher.  I can just see Donald X.  shining his bling and throwing down beats like a deck-building wordsmith assassin.

While it is perfectly normal to remain skeptical when someone tells you they’ve crafted a designer board-game that includes the players actually rapping as a core component, I am here to tell you that not only does this mixture work, but it works so well that you will find yourself throwing high fives across the table and engaging in raucous laughter like never before.  Rarely does a game provide such overt fun while teaching me at the same time.  LoC not only eases you into your future role as a free-styling maestro extraordinaire, it also teaches you wonderful things about your friends – like the fact that Ben has absolutely no rhythm but Jeremy can drop rhymes like it’s Hiroshima.  Assuming you don’t game with a Hip-Hop crew, you will see a different side of your buddies that is astounding and awe-inspiring.

The deck-building mechanics which form the foundation of the game are solid and provide for a surprising amount of depth.  LoC boasts three main elements: purchasing new cards with currency, open bidding against your opponents, and boisterous rapping.  The two forms of currency in the game are Bars (as in the musical kind), and Cash.  Bars are more prolific and are required in order to place a bid during the second half of your turn.  Cash is used to purchase some cards and $2 can also be spent to draw an additional card, which provides some nice flexibility.  In turn, cards you acquire will produce Bars and Cash as well as special abilities which can offer enormous benefit.

The bulk of the cards found in the game are Opportunity cards.  Rather than purchasing these cards from open pools at the center of the table, LoC does things a bit differently.  Each turn you have three Opportunity cards available for you, and only you, to purchase.  If you purchased one on a previous turn, the empty slot will be filled at the start of your next turn.  On the other hand, if you didn’t have the Bars or Cash to buy one of the three available cards last turn, you can swap one out.  This unique mechanic makes for some interesting play as the cards you have available are not the same as the rest of the table.  This provides for solid variety while forcing you to make the best with what you’ve been dealt (much like a hand in Race for the Galaxy).  Since there are no public card pools you can’t just mimic a better player or identify the best card combination from the setup of the game.

Opportunity cards come in several varieties, offering altogether different functions and opening the strategy of the game in different ways.  Moves are the most common, which may provide straight up currency (Bars and Cash) and/or a special effect.  These special effects allow you to break the game rules in various ways and make for some interesting decisions as you weigh the currency a card generates against its ability.  While Moves are acquired for free, Allies are purchased and provide similar yet stronger effects.  Ventures provide a real bang-for-your-buck as they remain in play once activated and provide Cash every turn.  Crew, similarly, stay on the table and offer their effects every round, although you must pay a cost every time you activate them.  Lastly, Shine cards provide Hype which functions as both victory points and experience (yes, there’s an RPG-like leveling element).

After you’ve played cards from your hand and purchased one of your available Opportunity cards, you move into the Show phase which is where you get to beat down your brethren with verbal assaults and lyrical mayhem.   This is the meat of the game and where the design really shines.  You now have two choices: using cards from your hand you may either bid a number of Bars to meet the cost of the current Show, or you must choose to enter the Cipher which has a much lower cost but offers considerably less benefit.  To make this bid, you have to play cards and activate abilities from your resources you did not use in the Opportunity phase.  This makes for a clever series of difficult choices as you need to balance your card acquisition with the opportunity cost of bidding heavy in the rap-fest Show phase.  When it comes to spitting fiery beats and besting your foes, nothing is certain and your large bid could be somewhat wasted if you can’t bring your A-game to the table.

Making a bid to take the stage at the Show is much more advantageous than settling for the Cipher.  The Show card may be refreshed after each player’s turn, and they can offer substantial Hype to the winner and a smaller amount to the loser.  Additionally, each Show card typically has a special condition, such as the awesome “Pirate Radio” which allows you to turn any of your favorite songs into a rap version for purposes of the Show.  If you decide to ante up and go for the Show, you must bid a number of Bars to meet the requirement for the particular Show card.  After you’ve done so, play proceeds around the table clockwise and each player may bid above any previous placed bid.  If another player decides to bid, they become the Challenger and take on the Host (the current player).  If you instead opted for the Cipher, everyone at the table can participate regardless of the highest bidder (the highest bidder does stand a chance for a slightly higher reward though).  After bids are settled, each player must then audibly rap a number of bars equal to their bid.  If you flub, get lost, or stumble your “friends” will boo you off the stage.  However, if you spit fire and drop the bomb you will get cheers, laughter, and fame.  People talk about erupting in huzzahs and animated high-fives after winning in Ghost Stories or making a perfect shot in Pitch Car; this happens very rarely in my group.  We were cheering and falling out of our chairs in pure joy while playing LoC.

While the idea of rapping and putting on a small show in front of your mates can be intimidating, the game offers hand-holding and aid so that even that old bruised banana on the counter can drop it like it’s hot when needed.  The rules allow you to conjure your rap using phrases printed on every card, from material logged in your memory, or from pure unadulterated free-styling.  This allows for a strong sense of freedom where a skilled group can play only using original off-the-cuff material, and a group of newbies can read from their assorted cards, the only requirement to spew the words to a beat and shake your body.  We settled on a house-rule of allowing your first line to come from a card and requiring the rest to be on the spot freestyling, which proved glorious.

The rewards from dominating the Stage come in the form of Hype, which is also gained from playing Shine cards as noted earlier.  Hype functions as a form of experience which allows you to level up, gaining additional benefits such as a higher hand size and extra free Bars you can spend every turn.  Play proceeds around the table with each player taking their turn until someone reaches level 5 and becomes a Legend of the Cipher.

Against all odds, this game hangs together remarkably.  The mechanics of each phase flow seamlessly into the hip-hop element and you get this astounding game whose whole is greater than the sum of its parts.  The experience is just so goddamn fun and ultimately memorable in a way similar to the first time you played Galaxy Trucker or The Resistance.  It will be occupying your mind for days and you will find yourself busting out rhymes while waiting in line at Chic-Fil-A, getting awkward glances while the couple next to you wonders why a 30 year old white guy is rapping about tasty chicken and waffle fries.

It’s a shame that so many forgettable games pull in the cash on Kickstarter while beautiful gems like Legend of the Cipher fail to garner mainstream attention.  As a plan-B, the folks behind this game went through the Game Crafter to publish and are currently offering a surprisingly great physical product for not being a mass-produced Chinese-made game.  I had never acquired a Game Crafter game before and was not expecting the professional quality cards that LoC is packed to the brim with.  If you can spare the cash and have an hour or so to stomp your gaming buddies in hip-hop battles of dominance, you owe it to yourself to visit the Game Crafter store and pick up this game.