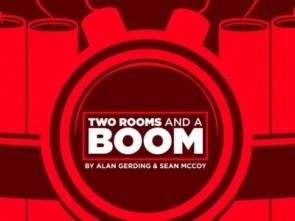 Hidden suicide bombers, conniving spies, infectious disease, and an evil timer that slams your head into the ground while all you want is a moment of clarity to speak with your team? Hell yes, I’m in. In the realm of social deduction games, if The Resistance was Stone Age then Two Rooms and a Boom (2R1B) is The Manhattan Project; It is sleek, sexy, and most importantly – a deep and dynamic experience.

In its simplest form, 2R1B is elegant and easy to understand. You receive a face-down card identifying you as a member of the Red or Blue team and then are randomly assigned to one of two playing areas (the “Two Rooms” part of the title). Mixed in amongst the Red members is a Bomber, and amid the Blues is a President. Members of the room are selected to be traded to the other room (“Hostages”) at the end of each of the five rounds of the game by an elected Leader of the room. If at the end of the final round the President is in the same room as the Bomber, Red team wins, otherwise Blue rejoices in victory.

The wrinkles come in the form of the five rounds being timed, and getting successively shorter – the first round is 5 minutes, then 4 minutes, then 3, and so on. The Leader of the room is the first person to be nominated at the beginning of the game, but can be usurped by a player starting a vote and gaining majority. Strategically, all of this leads to an experience where you attempt to identify your teammates early, isolate the key roles, and take control of the room so that you can manipulate the Hostage trading.

The fundamental twist in this game that separates it from its peers is that there are rules in place to facilitate identifying your teammates through hard evidence – players can reveal their role cards to each other. This is very different from most games in this genre that rely on you convincing another player purely through social means that you can be trusted. What this does is provide a stable platform of strategy discussion as you include allies in your plotting and attempt evil machinations to plant spies in the enemy’s group.

The mechanics in place grease the wheels of role revealing in an interesting way by giving limited power to disseminate what you know, while also causing you to second guess if you’re making the right move. You are allowed to share your role card with other players in very specific ways. The most common way to do this is to agree to co-reveal your card with another player, which involves you both temporarily trading cards and looking at the role of the guy next to you – it’s a consensual reveal that has to be adhered to if agreed upon. You can also privately show someone your card without reciprocation. Finally, if you’re jacked up on liquid courage you may decide to publicly show your card to multiple players (or the entire room even). One key aspect to understand related to the different reveals is that in a game of 11+ players, you may do any of the above actions and only show the color of your card, or you know, you can still show your entire card to someone if you like to walk the line and live dangerously (“Seatbelts are for suckers!”)

So now that we’re jamming and you understand the rules of the game and some elements of the strategy involved, let’s crank it to 11 – the game has dozens and dozens of special roles boasting powers which break the rules and blow your mind in interesting ways. The full experience involves using multiple special roles once you’ve become acclimated to the rules, and the effect on strategy and negotiation is tremendous. Many of the roles should be introduced to the game in pairs or like groups, as they features new concepts and ideas that play off each other. One early such group is the Doctor and Engineer. The President begins this game ill and must co-reveal with the Doctor before the end of the game, otherwise the President dies regardless of the Bomb. Likewise, the Engineer must co-reveal with the Bomber before end-game in order to repair the Bomb so it may go off. This is the first pair you’re probably going to throw in and the subtle effect of encouraging co-revealing will become readily apparent.

Another great set of roles are the Red and Blue Shy Guys. Each team starts with a Shy Guy on their team, and Shy Guys are not allowed to reveal any part of their card to anyone.

“Ben, want to color reveal and see if we’re on the same team?”

“Huh? But Jeremy said he was the Red Shy Guy when I was in the other room!”

The Shy Guys bring a great deal to the game through allowing others to bluff. Other rules interacting perfectly with the Shy Guys are Criminals who make other people Shy when they co-reveal, Psychologists who cure the “Shy” status, and Negotiators who may only do a co-reveal (no Color or Public reveals). Playing with all of these “Shy” status roles quickly alters the game space so that you now have to be careful who you reveal with as you don’t want to be duped into seeing the other team’s Criminal when you thought he was the Negotiator. What about when the Doctor is dicked over by a Criminal before he’s co-revealed with the President? Exactly.

There are an enormous amount of roles in the game and most all can be viewed in the current print and play set available on Tuesday Knight’s site, which I highly recommend you check out. You will see fan favorites like the Devil who must always tell a lie (“Brice, want to co-reveal?” “Noooo”), Spies whose color on their card matches the enemy’s color, and many more that completely change up the game and the way you approach it.

One final aspect of the roles that I must touch on are the Gray roles. The Gray roles are neutral to Red and Blue and contain their own win conditions. For instance, before the final round the Gambler must publicly announce who they think will win the game. If they are correct then they win, otherwise they lose. The Gambler is the simplest, but there are several combinations of Gray cards that play off each other in interesting ways. We see this with the Intern and Victim who want to end the game in the same room as the President and Bomber, respectively. Besides being interesting to play, the neutral roles allow the opportunity for Red or Blue to negotiate and form temporary alliances with the Gray members to achieve majority of votes for a new leader or trade information. If the Victim finds himself in a Red controlled room early, he may agree to work with them for the rest of the game if they can assure they will send him to the room with the bomber. Ad-hoc agreements like this run rampant and are sometimes betrayed upon. This is absolutely fantastic in play as you juggle all of these different elements in your head while trying to quickly figure out who your team is sending to the opposite room before the hammer of the timer falls and you need to make your selection.

I believe my enthusiasm is readily apparent, but I do wish to make one thing clear; this game seems to thrive on a larger crowd. While my experience of playing with 10 or less was only a couple of games, it was readily apparent that selecting a good mix of roles and establishing the right atmosphere for that few of people was difficult. We identified quickly that we preferred the 11+ player game (with color revealing) and I’d caution anyone who would be picking this up just to play with a local small group. The game is also susceptible to becoming derailed if a single player loses their cool or misunderstands a key rule about their role. This is a catch that exists in all social deduction games of this nature but it is something that you should be aware of when explaining the rules.

The bottom line is that with a suitably sized group this game is rock solid and brings a pure element of social deduction while offering endless replayabilty through a multitude of game changing roles. After playing this for several hours straight with a large group, we were absolutely enamored and wanted to keep going. If you read my previous review for the recently released Mascarade, you will remember I suggested that it would likely be my top game of 2013. While I still love Mascarade, that previous comment only remains true because Two Rooms and Boom will not officially be released until next year.

Discuss this article
Log in to comment
Posts in discussion: Two Rooms, a Boom, and a Great Damn Game - 2R1B Review