An Ingenious Game With A Questionable Lifespan - A Hanabi Review 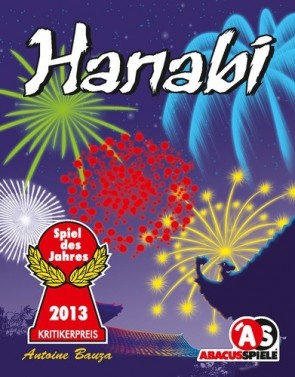 Hanabi may be a small game that hides inconspicuously on your shelf, but its shadow of popularity and awards dwarfs that of even the largest Fantasy Flight coffin box games of yore. This deck of 50 cards is the Spiel Des Jahres winner of 2013, a formidable award that has been given to titans such as Carcassonne and Dominion. Does this tiny combatant stand up to its accolades? 10 years from now will everyone and their mother still be holding firework cards up against their foreheads like a drunken Japanese version of Headbandz?

There are two primary strong points in Antoine Bauza’s design, the first being it is a cooperative card game, and the second being the fact that your hand of cards is visible to everyone at the table but yourself. The former is a less an innovation and more a cool little twist as cooperative games built on such simplicity are difficult to find. The latter is why this game is being lauded and it absolutely is a stellar and game-changing mechanic that is difficult to fathom how it took until 2010 for someone to come up with. It is such a simple and elegant mechanism that just works, and works well.

So you’re holding this hand of cards up so that everyone else at the table can see them so that you can give each other clues about both the number and color on the card. The point of the game is to blindly play cards from your backwards hand, although cards can only be played if they are a 1 or they are the next consecutive number for their given color (i.e. you can play a White 3 if the White 2 is the highest played White card on the table). You are also only able to play a 1 if the color has not yet been played on the table, this is important because there are duplicates of most cards.

The deck itself functions as a timer for the game and it clocks in at roughly 15 minutes. The pacing is excellent and it does not feel too long or too short for the weight of the decisions involved. The difficulty of the game arises through the limited scope and quantity of clues the group may exchange. Small clock tokens form resource and represent clues you may give to other players. Clues consist of pointing at one or more cards in another player’s hand, and telling them that all of the cards are the same number (and what that number is) or the same color (and what that color is). You can regain clue tokens by discarding cards, in which case the card will never re-enter the game. The only other niggle is that you are allowed two incorrect card plays, the third meaning you all lose.

Hanabi sounds interesting, it’s perfectly paced, and it allows you to get in a cooperative game as a filler; so what’s the problem? The problem is that no one is actually playing Hanabi. If I was unaware of the meaning behind this game’s name, I would likely come to the conclusion that Hanabi is an ancient Chinese word for dirty cheater. Nearly every group I have played this with gives out extra hints and clues beyond what the rules allow. You want the Drunken Japanese Headbandz Cheat Guide for Dummies?

-Wince noticeably and sigh when a player slowly selects a card from their hand to play or discard (“Ugh, not that one!”)

-Ask the player what he knows about his cards before giving a clue (“So you know those three cards you are holding cock-eyed are red, right?”)

-Repeat clues already given to players if they look like they’ve forgotten them (“Hmm, Jeremy you do know those two cards at opposite sides of your hand are the same color don’t you? Ben told you five minutes ago, remember?”)

Many people cheat accidentally as the game requires a great deal of discipline to keep a blank face. Worse yet, the game is less fun (although much more strategic) if you play strictly by the rules and only give clues as outlined. The rules do offer the option to be loose with clues in the variants section but it clearly breaks down the structure of the game and makes it more of an activity (oh no, the dreaded “A” word) rather than a game of sorts.

I can ultimately live with the cheating. What is more aggravating is the fact that game does not stand up to repeated plays with the same group of people. You will start to give clues and place cards in ways that form a pattern of sorts, a shared understanding between team members. The game pushes you towards this learned behavior as the metagame and ability to score in high increments practically requires it. Because of this the game loses its charm after several plays with your group and that spark begins to fade a bit. The game still remains fun, but you find yourselves scoring higher and higher due to assumptions and shared understandings rather than actual meaningful clues. It feels like this is baked into the game on purpose and I find it grating as it mars the reputation of an otherwise clever and concise card game.

Hanabi is absolutely worth playing a few times. The mechanics are borderline ingenious and the package is streamlined in a way that will make even Love Letter envious. I imagine we will be seeing an evolution of this mechanic from other designers in the future, improvements based on Bauza’s exceptional spark of creativity. I do however caution – don’t get too attached to this one as it will burn and then fizzle out almost instantaneously akin to its explosive brethren dotting the sky.

Discuss this article
Log in to comment
Posts in discussion: An Ingenious Game With A Questionable Lifespan - A Hanabi Review