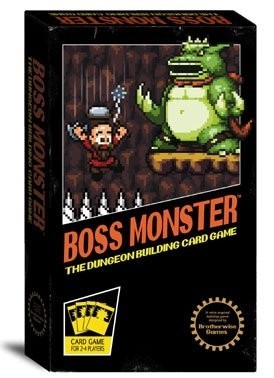 This is a small filler card game with an unassuming cover and modest cards.  You build cutesy horizontal dungeons stuffed with pixelated monsters and hungry traps.  You draw unassuming heroes to your lair and feast upon the corpses of the once brave, laughing maniacally as their relatives mourn and the village fills another empty funeral plot.  This game is as fun as it sounds and it accomplishes a satisfying experience in a short 30 minutes with just a couple decks of cards.

Each player receives a Boss Monster at the beginning of the game which possesses a special level up ability.  This ability is activated immediately when a player builds the fifth room of his dungeon, typically providing a nice boost or a crippling blow to your enemy villains.  You also receive a handful of room cards and a couple spells which offer a wide array of affects which break the rules in interesting ways.

Two chief mechanisms run this efficient machine – dungeon expansion and hero mortification.  Expanding your lair is accomplished via players simultaneously playing a room card at the beginning of each turn.  You are allowed to play a room card into a new “space” of your dungeon or you can replace an existing room by playing the card on top of an existing one.  Sometimes replacing an old room is performed so you can upgrade to an advanced room and sometimes you simply need to adjust your strategy and head down a new approach.

After the Doozers do their work and your shiny new dungeon is itching for some action, the hero cards sitting in the middle of the table are assigned to each player based on the treasure symbols present in their dungeon.  Players total the quantity of each symbol type found on their room cards and on their Boss Monster card.  You have Ankh’s (attract Clerics), Loot (Thieves), Orbs (Mages), and Swords (Fighters).  The heroes you lure pass through each of your room cards in order, suffering damage and the special effects associated with each card.  If they have not been devoured by the time they get to your Boss Monster you suffer a wound or two, otherwise you receive one or two Gems (which are equivalent to victory points).  Play continues until only one Boss Monster is left standing or a player has collected 10 gems.

Boss Monster is an efficient game with little to no downtime and packs an adequate amount of decisions into the design space.  The game really feels like a more solid and enjoyable version of the dungeon siege phase of Vlaada Chvatil’s Dungeon Lords.  I’m an enormous Vlaada fan, but Dungeon Lords never quite clicked with me, as the experience of a band of warriors tearing through your dungeon and laying waste to your accomplishments felt like a group of bullies smugly stomping on my sandcastle I spent 4 hours building while suffering sunburn and dehydration.   Boss Monster, on the other hand, feels like you are feeding Nucky Thompson into a wood chipper, drinking upon his sweet blood like a delicious glass of Kool-Aid being splashed across your rosy cheeks.

The game can be particularly random in what cards you are dealt and this certainly may have an effect upon the outcome.  I have been involved in games where I’ve gotten nothing useful and could never quite muster enough treasure symbols to attract any heroes.  This is frustrating and the only saving grace is that it is not the normal occurrence and the game plays fast enough that you will soon be able to cleanse this bad taste.

I have not been lucky enough to play the Kickstarter version of this game with its plethora of extras, but I can assure you that the retail version boasts enough variety and content that I cannot see my group getting sick of this any time soon.  There are a number of interesting Boss Monsters, dozens and dozens of cool rooms, and enough spells that you will burn through many games before drawing a duplicate hand.  It is this strong degree of content which makes for the tough decisions turn to turn as you struggle with upgrading a room to do more damage versus converting a torture chamber into an endless pit.  You also have to juggle your treasure symbol management against the other players’ dungeons as failing to attract the correct quality and quantity and of hero cards will mean certain defeat.  The tightrope you must walk is difficult without being stressful, and nearly always enjoyable.

I very much enjoy this game and find myself constantly drawn to pulling it out to start off the night.  It gets your neurons firing without being a brain burner and I find everyone at the table smiling in amusement.  This is one of those games which flies under the radar due to the sea of fillers and more widely publicized heavyweight titles.  While I can lap up the hype of the current hotness as much as the next guy, sometimes you just want to feed a conga line of virtuous heroes into a Sarlacc pit.

Discuss this article
Log in to comment
Posts in discussion: Feeding A Conga Line Of Virtuous Heroes Into A Sarlacc Pit - A Boss Monster Review