The Black Album Has Nothing On Rust In Peace 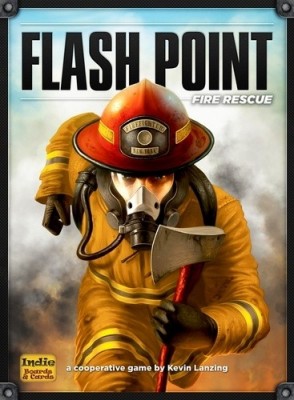 In 1985 Dave Mustaine released “Killing Is My Business…And Business Is Good!” in a drunken, hate filled rage which served as his vendetta fueled fist down the throat of the four bay area thrashers better known as Metallica. While Mustaine’s Megadeth would rally a devout following and produce some fucking amazing material, they never quite equaled his former band in the realm of popular opinion. The two were inextricably linked and no one could mention one without unjustly comparing it to the other.

In a sea of gamers, you will undoubtedly find a hell of a lot more geeks donning Pandemic patches upon their denim jackets than proudly displaying a Flash Point logo. Even the venerable Zee Garcia, the bald connoisseur of coops, hangs his head in exasperation when Tom Vasel mentions how much fun it is storming through a house engulfed in fiery inferno and rescuing the elderly and stray cats. This game is overlooked and under-represented in gaming circles as the majority head to its inferior older brother – I’m here to punch you in the gut and grab you by the mullet as the masses are irrevocably wrong.

Flash Point is loaded with more tasty riffs and pounding double-bass in a single game than Pandemic could muster over its lifetime. Over 45 intense minutes you and a group of friends will work together to navigate a burning maze of corridors and rooms, judiciously spending your limited action points to most efficiently mitigate the maliciously random bursts of fire. Dousing the flames and limiting the blaze will aid in your objective, but success is ultimately measured in your ability to extricate civilians from their 1200 square foot coffin.

While the game offers a softer, foam covered “Family” mode with a simpler ruleset, the advanced game is much more intriguing. Gameplay opens up when throwing in the various roles each player can occupy as you gain special abilities and fill a niche. You can unleash hurricane Katrina from your hose with the Driver, sprint through the house like a Kenyan as the Rescue Specialist, or move other players around like wooden pawns on a molten chess board with the Fire Captain. Each of the included 12 roles may be swapped during the game allowing players to gain new specialties and focus in response to the evolving situation at ground zero. This ability to swap special powers is excellent and really allows for strong variety and a bit of dynamism not present in the mighty Pandemic.

The difficulty of Flash Point is mainly found in the chaotic ground-swell of unpredictability lighting up the board. The fire appears and spreads in manic fits one moment while drawing to a slower flow of gentle cinders the next. One wouldn’t think listening to a minute of frenzied punk followed by a painful extended ballad would work so well but it absolutely does. The pace and flow is perfect as you’re sampled the occasional breather amid the storm but can never quite count on it. This process of fire generated via dice rolling makes for a sense of intensity and unpredictability not seen in its more popular sibling. You get much less of that mathy logic puzzle and more of an alcohol fueled jog through a mine field.

What is so goddamn fun about a game focused on the chaotic spread of fiery death are the difficult decisions that pop up on a continuing basis. You will often find yourself at one end of the house blanketing flames before they tear down the infrastructure of the building, when a new burst will ignite at the other end. The problem is that you were already headed towards Jim, the aloof home owner sheltered in the bathroom, but now Sally, his fight-or-flight-lacking wife, is adjacent to a wall of fire. With only a limited number of action points each turn you have to coordinate with your teammates and perpetually perform triage. Fire can spread much more rapidly than solutions so you can never quite perfectly think out the answer and prepare for each possible outcome. You will need to decide quickly who you can and cannot save, and although the furry little victims will draw some smiles due to their cuteness, do yourselves a favor and leave them to their ashen grave (you can thank me later).

While this game may not be fawned over as much as it should, it has reached a credible level of success that is wholly impressive. The game is currently sold at Barnes and Noble and has moved enough copies to justify several expansions. The follow-up content focuses on variety, adding a deathtrap of a skyscraper as well as 2 story buildings and the associated rules for using ladders. The solidly performing Structural Engineer role can also be found in the Urban Structures expansion and I positively recommend you throw this into your next large game haul. Indie Boards and Cards have shown an overt commitment to publishing a plethora of additional content over the next few years with the most recent kickstarter currently in transit. I also would be remiss without mentioning the absolutely fantastic print ‘n play Ladder 11 expansion which completely turns the game on its head by offering a campaign mode and continuing play focused on growing your firefighter (OK, so I may be biased but I only speak in truth).

Flash Point: Fire Rescue may not be the most innovative design to grace your table, but it may just be the most fun jammed into a coop game. Depth and accessibility make for a deadly mixture that will deliver fist-pumping goodness every time. Toss the ‘demic in the trash and exchange your petri dish for an oxygen tank; “The Black Album” has nothing on “Rust In Peace”.

Discuss this article
Log in to comment
Posts in discussion: The Black Album Has Nothing On Rust In Peace