Mechwarrior 2 was released back in the mid-90s and I was a few years away from getting my first car (the vehicle that took me away from the serious videogaming that I used to do).  I played a ton of MW2.  Loved it.  Hundreds of hours spent turning big formidable death machines into scrap heaps.  love the concept behind Mechwarrior/Battletech.  But I haven't found a good Mechwarrior video game that gives me that same feeling MW 2 did, even though I've been keeping up and trying them as they come and go.

So a year or so ago I picked up Battletech 2nd Edition with the paper mechs on the cheap.  Read the rules, perused the forums, and got what I thought was a good handle on the game.  But it wasn't fun to play.  I loved the concept and I could see how it could be fun to play with the right time investment, but what I really wanted was a mech game I could just sit down and play once in a while without the heavy ruleset.  I wanted to spend my gaming time blowing stuff up, not triple-checking modifiers and small details.  The newer Classic Battletech Rules were free to come by, but were basically the same thing, so I slowly backed away and sold the game.

Around this time I was hearing good things about the Mechwarrior Age of Destruction clix game, and Miniature Market has a ton of that stuff for cheap.  I picked up a starter set and some extra mechs to try it out and... it sat on the shelf for a good long while.  Fast-forward to this past couple weeks: the MechWarrior bug bit me again and I sat down with the rules.  I read the rules thrice and decided that this game is not an improvement.  I'm not going to debate whether it's a good miniatures ruleset, but it still just has too much stuff.  Lots of modifiers and special cases, and it has that clix bug where you spend a lot of time peering at the model bases to check their current capabilities.  I played a couple solo practice rounds, a few with the quick-start rules and a few rounds with the full rules.  Fast-playing it was not.

What I really want is a Nexus Ops level of complexity with more mech-y goodness like hardpoints, armor modeling, and the ability to do custom mech designs.  Why doesn't anyone make that game?

It turns out somebody does, and it's called Armor Grid: Mech Attack.  The rules are dirt-cheap on WargameVault, and it comes with papercraft mech, infantry, and vehicle models.  You get to put little papercraft custom weapons on your units when you design them too, so they look unique and you can tell at a glance what ordinance they're packing.  Neat.  It's a tabletop miniatures game so no hexes; you play with units,terrain, and rulers.  Vehicles and mechs have an armor grid (get it?) and different weapons have different damage profiles.  Lasers will penetrate deep into armor, machine guns do a sort of spray damage where they hit multiple locations but don't really penetrate, and so on.  You mark off boxes on your grid corresponding to the hits you take, and once damage penetrates into your critical systems area you're at risk of getting limbs blown off or outright destroyed.  You can penetrate deep into a mech's armor with a laser shot and, with a lucky die roll, hit the hole you made with a missle to blow out a major section of armor. Awesome!  Mechs have basic heat management to deal with, but it's more of a consideration than a nuisance like it is in Battletech.  Letting your heat get out of control is dangerous though, and the game strikes a really nice balance between usability and quick play for both heat and armor modeling.  Building mechs is dead simple; you can pick a standard frame and use leftover build points to add equipment, and there are rules to go full custom if you want to do that.  Troops don't have an armor grid; hits to troops cause a roll on the Troop Damage Table, which can be dramatic.  Troops are surprisingly effective, and sufficiently squishy.

We set up a two-player AG:MA skirmish last night.  Each side had two mechs, three infantry, and one vehicle.  We then set out to pick and build our units, and we both settled on: 1x heavy mech, 1x medium mech, 1x tank, 2x light infanry, and 1x heavy infantry.  We kept the terrain simple and only used forests and water.  After a few rounds our lack of tactical forward thinking lead to the mechs pushing to the outward flanks and the middle ground full of infantry and vehicles.  My wife's heavy mech made a couple lucky shots against my heavy, doing exactly the kind of lucky armor penetration described above.  An unlucky roll on the Crit Table dropped my heavy mech like a stone.  I tried to stage my infantry in the forest areas for cover but her heavy middle infantry push cut through them anyway.  With my middle and right-side flank weakened I tried to push in my left side flank with my medium mech and tank.  I managed to take out her medium mech with heavy cannon and laser fire, but promptly overheated, allowing her infantry to close the gap and lay me to waste in just a few more turns.  Altogether from setup to design to battle it took us about 90 minutes. 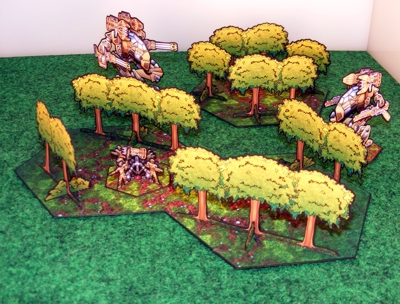 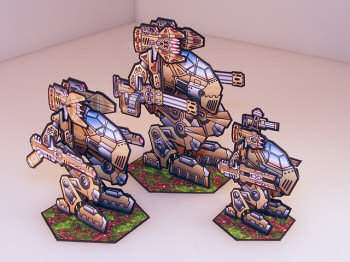 AG:MA is a solid game.  It sacrifices a bit of realism to keep the game pace up and I'm on board with that.

Seriously, if a lightweight mech miniatures game sounds appealing go get the (cheap!) rules at WargameVault.  The Mega-Pack Bundle is a great place to start.