"Hey, why don't you loan me that," I once said as I pointed to the thin but alluring box on the top shelf of my friend's game closet. "I'll learn it and then we can play it and see if it's all it's cracked up to be."

"Sure," she said, "If you think you can. Al and I once tried all summer to learn that game and failed. Even when we had a friend come over who knew how to play and showed us we still had no idea what was going on."

"No problem," I said boastfully, "I can handle it.

And so it was that the game was transferred from Shellie's game shelf to mine. Where it sat. For a long time. I won't say it was ignored but I did spend a lot of time avoiding direct eye contact. It mocked me and taunted me. It had a reputation of delivering one of the greatest gaming experiences ever but there's nothing in this life for free and the cost would be a great deal of time and brain power. Then, of course, I would have to teach it. I would look, think about it, then avert my gaze, slump my shoulders, and shuffle off to the familiar embrace of my other games. 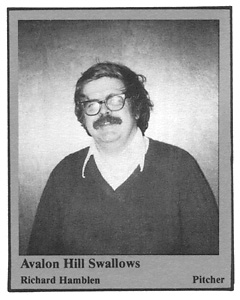 Avalon Hill of the old days. The good old days? Hardly. I don't let nostalgia color my vision when I think of the games of yore. There are a few, a precious few, games of that era that really deliver an experience that make them worth owning or learning. Most were far more trouble than they were worth. Magic Realm, though, is considered to be one of the best.

One of the things Avalon Hill was known for were their rule books. Dense microscopic text in double columns on every page. The rules broken down like the judicial code by section and subsection. This does not make for an easy read. It's dull as dishwater. What it is good for is, later when the game is learned, referencing specific rules during play.

Now Avalon Hill was primarily a maker of war games. And their rule books for those games with concepts and mechanisms that they were intimately familiar with were, for the most, part pretty good. It was when they delved into games with new ideas and novel procedures that they would fumble. Those rule books could be so bad as to be unusable. Magic Realm was a case of the latter and the rule book has a reputation the direct opposite of the game itself. It is laughably known as one of the worst. 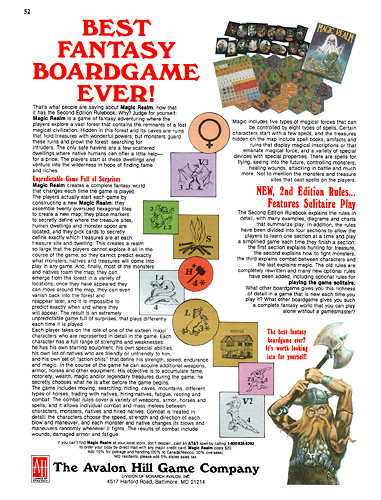 One thing Avalon Hill did do, that is to their credit, is in some of the most complicated games they broke the rules down and presented them in episodic fashion so that a person who knew nothing of the game could learn a few of the rules at a time and then play a scenario or stripped down version of the game. In this way, a game that would certainly overwhelm a normal person would become less daunting. Squad Leader, the original, did this quite well and was how I learned that game. Magic Realm does it too and I decided that I would try use it to master this game.

So, I blew the dust off that thin box and pulled out the rules. The first section, called an "Encounter", is really not that long at all and in it are described the game set up and the movement rules.

The game is played on a set of hexes that are set up at the start of each game so that the playing area is different every time you play. If you've played Twilight Imperium 3 or Settlers of Cataan, you know the idea. No big deal, in the 21st century we've seen this in games time and time again although I imagine in 1978 it was pretty unique and explains why they take close to a whole column of text to explain the tile placement rules that boil down to the idea that the tiles need to be placed in such a way that the roads make sense and there must be a path from the start tile to the new tile.

"Peshaw!" I thought. "These people who say that this game is hard, they don't know what they are talking about."

The next rules were the movement rules and these too are not so hard. The game uses preplanned movement, an idea that is long out of style, but wasn't so uncommon in the old days. Write down four moves ahead of time, player order is chosen randomly, execute the moves in player order and if you find yourself in situation where what you wrote down can't be done, then tough luck, it doesn't happen.

It's at this point the rule book says to STOP! and play the encounter which was useful mostly for the set up and becoming familiar with "warning tokens" which will be important later, I assume. The movement rules themselves are pretty straight forward with the exception of the "blocking" rules which are worded horribly but that I worked out after reading them five times in a row.

So now I have taken the first baby step. I'm on my way. The next encounter introduces combat. I have a feeling it's going to be a bit harder than the first one.