Wings of War/Wings of Glory Bulk Storage Solution for Under $50.

Alright, so after having a conversation with Dogmatix about the price of storage containers, I decided to finally break down and take some snapshots of how I have my stuff arranged for transport.  Below are photos that more or less cover 100% of my Wings of Glory WWI material, 30+ planes, decks for each, additional decks out the wazoo, damage decks, boards, sticks, rules, reference book for each aircraft, the works.  Only thing missing is empty boxes in case I need to mail stuff off to people. 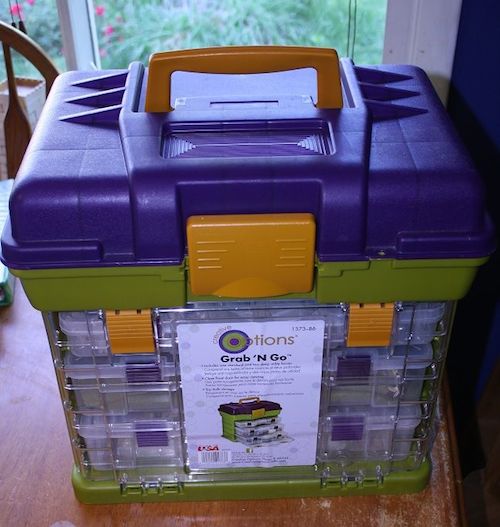 This is from JoAnn Fabrics, retails for about 50, but JoAnns has a permanent weekly 40% off coupon in their flyer and on occasion 50% off, so snuggle up to a woman in your life and go through her mail when she's not looking.  That puts it at about $25 or $30.

That top bucket is tall enough for two Wings of War starter boxes for reference.  The lid is domed, so there's a butt-ton of space up top for various bits and pieces and I keep the more common game items up there.  The WoW boxes contain the rules, home-printed rules and scenarios, a dozen measuring sticks and about 25 player mats which generally don't get used.  These are the old WoW mats that are far more useful, my meager two WoG "mats" are ghettoized to the right side of the bucket so that they don't suggest their warping tendencies to the old ones.  Aftermarket pegs, an old book that references each plane from the war with photos, two sets of A damage decks, one set of two and one set of four (the brown box) fully shuffled into each other for big sessions with 20+ airplanes.  Needless to say they work equally well for small battles too.  I have spare fabric in the bucket as well, which you'll see used in the images below.

The top of the image shows the top Plano box opened.  Unfortunately there's a bit of a glare, but the box holds card decks upright, in ziplocks, damn near perfectly.  I have The top have of the box is ALL the support cards for the game save for my six A damage decks.  Three B decks, two C, two D (I think 2).  Bomb cards, target cards, extra maneuver decks that didn't come with planes (getting to be quite a lot now with my recent pickup of five WoW starter boxes), the works.  The bottom half is the quick-deployment-kits for the models, base, pegs, card deck, and two cards showing the plane, one facing out on each side so that a deck is never upside-down when you're handling them.  Central Powers on the left, Entente on the Right.  I pull the entire set and fan them on the table at playtime.  Each has an image of the plane facing up so it's quick to grab what you need.  The bottom of the image shows one of [b]two Plano boxes for model storage[/b], with the top fabric in place.  Fabric underneath the models and above protects and holds them in place.  It's very soft, non-linty, very malleable so it wraps itself around the models.  I'm sure there's a name for it but I ask my wife for "the fluffy fabric" and she brings me a yard out of her extensive reserve.  Color of the fabric matches the army underneath.

With the fabric lifted off you can see the models underneath, carefully angled and spaced to prevent them banging into each other.  With the fabric on top they don't move appreciably, though I've never had a "big" drop of the box.  It certainly does get carted around though.  As I said above, fabric color indicates army, and I'd like to just take a moment to point out that damn, that red Albatross in the corner is just one fine looking airplane.  Super-rich color.

Next is the "other" Plano box, the less useful one, cracked open --

Given the choice I would have a second Plano like the one prior to this, but I can't figure out a way to get one short of buying another one of these big containers.  It has a Plano number on it and Plano's url for contact, but when I contacted them they couldn't find the number in their catalog, leading me to believe it was a one-off build for this company that created the case.  After getting pissed off about not being able to find another container with dividers in it I got out my band saw and an old Amazon shipping box and made my own.  Not exactly the Ritz, but it does the job and I suddenly have room for an additional twelve airplanes without even squeezing too hard.  A few spare decks in the sides because it's easier than keeping them in the top bucket of the container.  A lot of the card decks I carry are largely chaff, though it never hurts to keep them in case a deck is lost of damaged.  I should park them in the garage though and likely will once space dictates the need.

I think my total cost for storage is $35 or so, the big container plus the cost of the fabric which is minimal.  That's 31 planes, all game components including a metric butt-ton of redundancy, six A damage decks and dupes of the other three, printed scenarios, a book on aircraft history, spare pegs in two colors, the works.  I'm at about a dollar a player for long-term storage.

This will go into a Blog Post today as well to give it a little more visibility, feel free to comment in either location.  I finally got this done, now I can just point people to it when they ask!

Discuss this article
Log in to comment
Posts in discussion: Wings of War/Wings of Glory Bulk Storage Solution for Under $50. 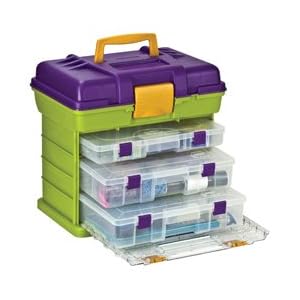 Just thought I'd mention that JoAnn Fabrics has a coupon good through tomorrow here -- www.joann.com/coupon/ that gives you 60% off one of the carriers displayed above. Here's hoping for a choice of colors. The web site shows it at $49, so that would likely make it less than $20 at your local store. (There's an online code as well for those who want to pick it up online.) My case has gotten quite tight, so I'm going to consider making a run out tomorrow for a second one, as that's the price of one piece of Battle Foam.

ubarose replied the topic: #210978 19 Sep 2015 11:06
Jo-Ann is a great source for storage solutions is all shapes, sizes and configurations. They have 40% off coupons weekly, and the 60% off coupons every couple of months. Tip: the ziplock baggies of various sizes are in the beading department.
Read More...