My Observations: The Castles of Burgundy 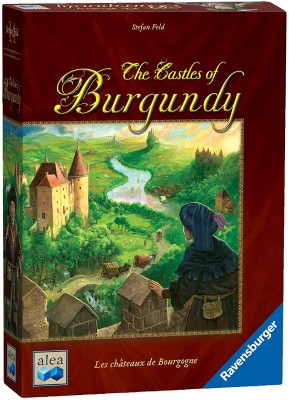 From time to time we play a game, usually a modern euro design, and it transpires in the final count up that all the players have really close scores when you thought mid way through that some players were doing far better than others.

The question that comes to mind, and has been discussed on this forum, how much did my decisions really matter? Was the game designed in such a way that we were all going to get close scores anyway?

I wondered this after my most recent game of Castles of Burgundy. Not because our scores were close, they were, but because looking at the board and some of the games mechanics I realised that the game was designed to give similar scores, it is hard coded in.

Before I get into this I’ll say that I don’t think this makes Castles of Burgundy a bad game, and that I quite like the game. It is not fantastic, but for a euro its a pretty pleasant experience.

The Castles of Burgundy is a euro ostensibly about developing an estate around a castle in medieval europe. You do this by rolling dice and using the results to pick up tiles and place them on your player board filling it in. You have a hexagonal player sheet filled with little hexes of varying colours. The main board is a flow chart of different boxes each containing little hex tiles of varying colours that represent fields of chickens, ports, brothels etc. You get points for competing coloured areas on your player sheet. So when you put down three farms to fill the three green hexes sitting adjacent to each other you score one set of points for the round you did it in, and another for the size of the area you filled. There are a few other ways to get points and the game has the usual euro bonus for getting most of x and being the first to do Y but the majority of the points are scored for filling in areas. You get more points for bigger areas and more points for filling in areas in early turns of the game. In the last turn you get 2 points (maybe 1 i forget) in the first you get 10 I think.

So hows it a setup?

Its actually fairly obvious. You get two actions a turn, and the occasional bonus action resulting in around 50 actions across the game. You have a limited number of spaces to fill in(36 total) on your player sheet, and the sheets are designed to be balanced. The maximum number of points you can score for filling in the board and getting completion points is set. I tend to find that players of reasonable ability will fill in about 70-80% of the spaces. Each of you will get those points regardless, it’s a given. That leaves the bonuses for filling in regions in the earlier rounds. The obvious strategy here is to fill in the smaller ones earlier, because this bonus is just timing and doesn’t consider the size of the area. The boards however seemed to have been designed with this in mind. The smaller areas are scattered about the player sheet and you cannot just place tiles where you like, you have to grow out from tiles already down. So again this is controlled in the design. If each player is sensible and prioritizes the easy gains early, they will end up with very similar results.

The only real variables are the three other point sources. There are yellow tiles, that go in yellow regions that offer the typical euro bonuses at the end scoring for having one of each type of X etc, or that give bonus resources and actions or die roll mitigation for dealing with certain types of tiles. This allows for some engine building and some strategic focus, but given you only can place a maximum of 4 or 5 of these tiles its not a major part of the game. Next there are the farm tiles. This is probably the biggest swinger in terms of points and in my experience usually determines the winner. Farm tiles have little animals on them, sheeps, pigs, chickens, cows. Between 2-4 animals. When you place them you score a point per animal, and if there is another tile in the region with the same animals you score each of the animals on that tile again. So the best way to do this is to get a monoculture of animals. This is one facet of the game is typically the difference between the winner and the loser. The third extra points route is shipping goods. It can be worthwhile, but is actions expensive so I haven’t seen it play a major role unless someone has a yellow tile that really assists with it.

There was a thread here not to long ago in response to a BGG thread on the different schools of game design. I’m too lazy to track down the author or links etc, but it described euros as the competition focused designs. I’m not sure thats really true. At least not for Castles of Burgundy.

I think the attraction of designs like this is that they are comfortable to play. You get to exercise some creativity and build your little world, get a competitive score at the end, and no one gets upset. I’m not actually against this. Its not what I want on a regular basis from a game but It’s enjoyable enough.

From a competitive standpoint you are really fighting over margins in this game. The bulk of your points are pre-programmed, its a question of slight gains in efficiency, getting all the same animal tiles, and a little bit of timing, and the occasional opportunistic passive aggressive block. Its not that this doesn't take skill, but its not exactly go, or chess.

I think in many respects this game shows the cleverness of its designer Stephen Feld. Its a game that makes you feel clever, and gives you a sense of freedom and is quite convincing of that when actually its all very controlled. People look at the dice placement and all the tiles they can choose from and see lots of ‘interesting’ decisions but its a well crafted illusion. I GM a lot of pen and paper roleplaying games and I often employ similar tactics (though not as well). In rpgs you want to give the players a sense of agency and freedom, but other than going full improvisation (which can get boring after a while) you have to fool the players into thinking they have more agency than they really do. Its an art Feld seems to have mastered.